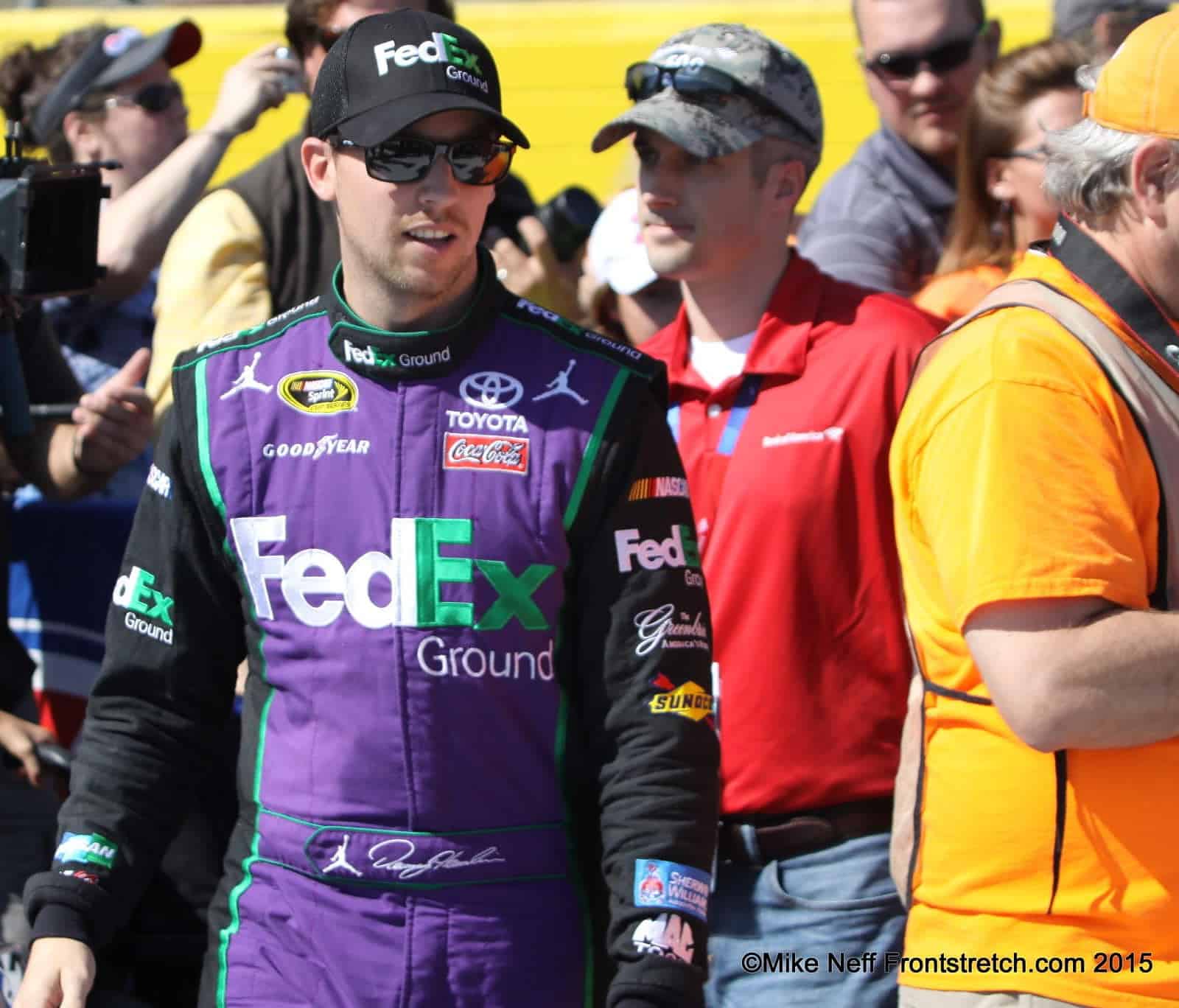 All told, it wasn’t too shabby a year for Denny Hamlin.

The driver of the No. 11 FedEx Toyota finished up the 2015 season in ninth place, the eighth time in 10 full seasons at the NASCAR Sprint Cup Series level that the career Joe Gibbs Racing driver has cracked the top 10 in the overall standings.

Hamlin picked up two wins during the 2015 season to make it 26 wins for the career, good for a tie with Dale Earnhardt Jr. and Fred Lorenzen for 27th in series history. He also won his first Sprint All-Star Race, thanks to some excellent pit work on the final stop of the race by one of the very best pit crews in the business.

“You want to win the Daytona 500, you want to win the Brickyard, you want to win Coca-Cola 600 and you want to be an all-star,” said Hamlin in victory lane after his spring victory in the exhibition race. “Just a big day. It’s just an unbelievable experience. …We just didn’t have a car that could run with some of those guys. But that pit crew, man, what can I say, they got this for me, there’s no doubt.”

Hamlin’s first victory came in the regular season came in sixth race of the season at Martinsville Speedway, the fifth time he has taken home the famous Grandfather Clock trophy. In the waning laps, the No. 11 held off a hard-charging Brad Keselowski to book an early playoff berth.

His other victory came at Chicagoland Speedway in most unlikely circumstances in the opening race of the playoffs. An early spin saw him go a lap down to make the necessary repairs. In the end it took a gutsy move from third place on the final restart with just a handful of laps left to go for Hamlin to finish off a fine afternoon and notch an unexpected and morale-boosting win – not to mention that the win came just 12 days removed from Hamlin tearing his right ACL while playing basketball.

Add in 14 top fives, 20 top 20s, 529 laps led, three pole positions and three Xfinity Series wins at Richmond International Raceway, New Hampshire Motor Speedway and Darlington Raceway in just 11 races, and it is hard to argue that 2015 was anything other than a solid, successful season.

But the truth is it was also a season that could have offered so much more for the Chesterfield, Va. native.

Hamlin’s title tilt ultimately came crashing to an end in the sixth race of the Chase at Talladega Superspeedway. He had opened the second round of the Chase in strong form with a fourth-place run at Charlotte Motor Speedway and a runner-up finish at Kansas Speedway. He just needed a good 15th place kind of day, but Talladega is not a track at which that sort of game plan is even vaguely a viable option.

The No. 11 looked fast, leading five laps in the early going on the high banks of Talladega, but loose escape hatches on the roof of the car, unprompted by any kind of race damage or incident, meant having to pit on two occasions under green, losing multiple laps in the process. Hamlin ended up in 37th place, caught up in what was a farcical end to the race, but the truth is the damage had been done long before. Tweeted Hamlin after the race in an unvarnished opinion of proceedings:

What a joke we have a car with no motor wreck the field to end the race. Complete crap. Sorry to anyone who spent $ coming to this circus

But despite his very evident frustrations, he was also quick to defend his team: “We’ve come a long way as an organization as far as eliminating those things, but they happen and it just got us at the wrong time in the Chase.”

Once eliminated from championship contention, Hamlin finished third at Martinsville and wasn’t shy to offer his thoughts on the afternoon via Twitter:

Thought it was pretty clear from drivers reactions after the race that Joey broke driver code. Matt made sure it was enforced. #freematt

Hamlin also made t-shirts that he sold to benefit his Denny Hamlin Foundation in a display of solidarity for his Joe Gibbs Racing teammate. He finished 38th at Texas the following week and rounded out the season with an eighth-place run at Phoenix International Raceway and a 10th-place effort in the final race of the year.

The big news for Hamlin headed into 2016 is that he has a new crew chief. Mike Wheeler, who served as Hamlin’s race engineer for a decade before taking a year as a crew chief at the NXS level, will take over duties atop the No. 11 pit box.

Chemistry at the crew chief-driver level is of paramount importance and this is a partnership that has both much history and much affection not to mention a good deal of success. Who knows, “Wheels” might just be the man to help Hamlin finally snag his long-awaited first championship.