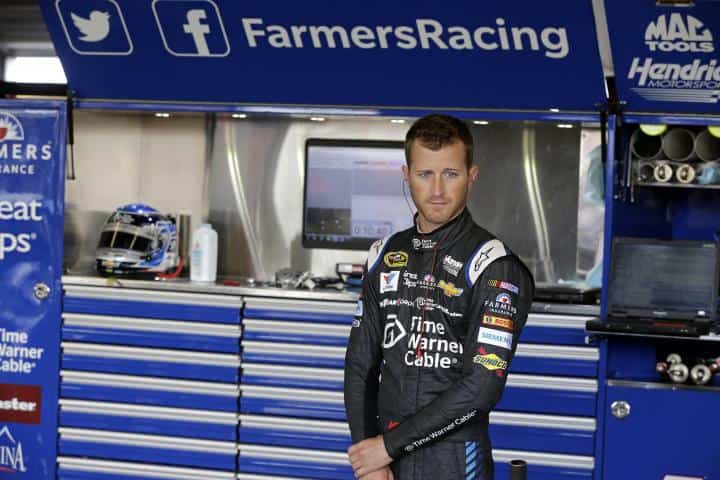 Kasey Kahne looked to the 2015 season as a reboot. With his longtime crew chief Kenny Francis replaced by Keith Rodden, the change was meant to invigorate a career that had become middling. With a finishes of 12th and 15th in 2013 and 2014, respectively, Kahne seemed to be a driver in his mid-30s who had lost his way. By breaking up the driver-crew chief combo, a new sense of urgency should have propelled the team up the standings.

The season began in a solid fashion, taking ninth at Daytona, followed by 14th at Atlanta, a 17th at Las Vegas and then a fourth at Phoenix. That kind of opening should have put him in a decent position, and even another 17th at Fontana shouldn’t have torpedoed his season.

But beginning at Bristol, and with a 37th-place finish, Kahne’s season became one of fits and sputters. Sure, he racked up six top-20 finishes between Kansas and Sonoma, but only two of those finishes put him inside the top 10. What’s worse is that beginning with Daytona, Kahne’s finishes went in this order: 32, 27, 19, 24, 43, 42.

The funny thing is that Kahne still was not out of Chase contention. Even after those last two results, he managed to stick around, hovering in 17th overall. Most people felt that with the Hendrick Motorsports resources that there’d be no reason to to question Kahne making the postseason fun.

The scariest moment of his season had to be at Pocono when he slid off turn 3 and on to pit road, nailing the wall. The fright to both he and the crew members as he slammed into an area not protected by SAFER barriers, and the crew personnel running for their lives, was nothing short of one of those proverbial dodged-a-bullet moments. Kahne walked away but looked shaky, while those on pit road did their best to recover and focus on the race.

But really, he just never got going, wading through a morass of mediocre finishes that continued to keep him mired on the cusp of Chase competition but ultimately failing to land within the range need to compete, sitting 18th overall after Richmond.

Kahne didn’t find the top 10 again until the series hit Loudon for the second time in the season, scoring a ninth. The rest of the season followed the haphazard pattern that shaped his whole season, a mix of good races and bad ones with very little in the way of consistency.

As Kahne heads into the offseason there are a number of questions that surround the team.

The first of those has to be whether or not Kahne is still one of the more talented drivers in the circuit. His splashy beginnings, one that showed tremendous promise, have led to a career that is nothing short of a yo-yo. Every time there’s reason to believe that he might put together a championship-contending season, it instead looks like a crumpled car being taken back to the garage.

No doubt he still has some talent but there’s something going on with him as a driver that fails to take the talent and get the results. Whether he needs more change, no change, a psychologist or just a peaceful offseason, the key starts with him attaining and maintaining a sense of purpose and focus.

The next question rests with the Keith Rodden and whether or not he is the crew chief that can lead Kahne back to racing at the front. With Rodden at the helm, the team managed just three DNFs, which is pretty decent, but his average finish of 18.1 is not so special, especially considering where the team parks its cars. Even Rick Hendrick has to be questioning just what is going on with the No. 5 crew.

The average finish also matched Kahne’s overall finishing position, out of the Chase and not even able to make up spots. This season was also the first since 2010 that Kahne went winless, so statistically, this year looks like both an aberration but also a big question mark.

The final question that comes around is how Kahne will get along with his new garage-mate Chase Elliott. Not unlike the circumstances surrounding last year and how Jeff Gordon brought an enormous amount of attention to the shop, Elliott’s arrival is likely to bring some of the same (though likely not on the same scale). How both Kahne and Elliott handle that relationship is likely to go a long way toward the success of both of them.

One aspect to consider about Kahne is that he never really has been a superstar driver. His career average finish is 17.4, which for a driver with wins, points to a notion that he is hot and cold. The thing that he hasn’t quite developed that other frontrunners have, is how to manage the bad days so that they don’t become terrible ones.

Why HMS extended him after 2014 was beyond me and his 2015 season did nothing to change that opinion.
I still go back to his crash at Loudon a couple years ago and the strange interview that followed with Dr. Punch. Any time I’ve seen him interviewed since, something just seems a little off with him.

I’m an avid fan of Kasey’s and also was surprised when contract was signed. I feel his personal problems have overflowed onto the race tracks. His concentration is off and he always seems rattled when anything goes wrong with his car, as if he just can’t regroup. He may need to look somewhere to find the determination he used to have.

How many times have we seen the #5 car qualify good, go to the first pit stop, make adjustments and start to go backwards. This sounds like a crew chief problem or that team is not getting the proper engineering help. kyle busch had problems in the 5 ar and had to move to another team to be successful. This problem with the 5 car didn’t start with kasey. That team seems to get the bottom of the barrel parts.