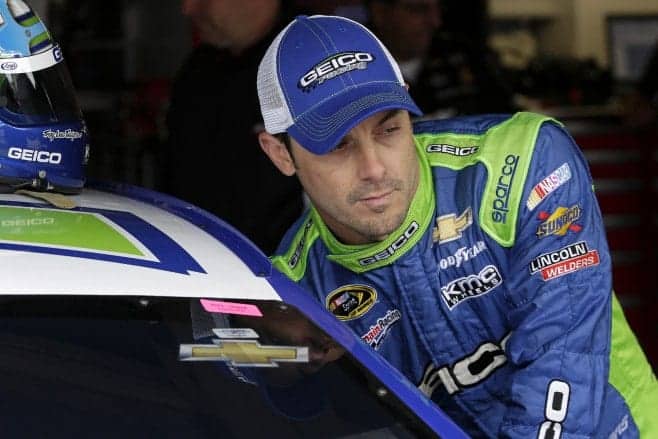 How hard is it to succeed in NASCAR’s Sprint Cup Series? Ask single-car Germain Racing.

A two-time Camping World Truck Series championship organization, they entered the Sprint Cup fray in 2009 on a part-time basis with veteran Max Papis behind the wheel. In 2010, they attempted the whole schedule with Papis, making a driver switch midseason to current wheelman Casey Mears but failing to qualify for six races while starting and parking for a large chunk of the year. The start-and-park model continued for a couple more seasons with Mears until primary sponsor GEICO stepped to the plate and added enough funding to cover the entire year. Team and driver hated it, for sure but it was the only way to get to the track at all for those unfunded events.

Fast forward to 2015 and it’s clear the moves have led to progress. Two manufacturer changes, with the most recent to Chevy in 2014, and an alliance with Richard Childress Racing for the last two seasons has given team and driver stability. That led to the team’s best finish ever in driver points (23rd).

Mears, who is an outstanding restrictor-plate racer, kicked off 2015 with a sixth-place finish in the Daytona 500. He and the team were respectable in the early part of the season. For a small team, top-20 finishes are important, top 15s are a big deal, and top 10s are icing on the cake. Their eight top-20 runs in the first half weren’t quite the start Mears and Co. hoped for, however.

Intermediate tracks still proved to be a challenge; Mears’s best finishes in the first half came at Daytona and Martinsville, and while he was also strong at Atlanta, Kansas, Pocono and Michigan, the team wasn’t consistently able to find a setup that would allow for the kind of adjustments that lead to top finishes.

In an interview with Frontstretch in May, Mears indicated that while results were improving, the team was still missing a few pieces… including luck.

“I feel like we should be sitting inside the top 15 pretty solid,” Mears said. “We’ve had some things just happen this year. We were at Phoenix and had the right rear spring come out of the bucket and we didn’t know it and we had a very fast racecar and got a pretty mediocre finish there. At Kansas we had a really fast racecar but had an off set of tires that put us a lap down. We put a better set of tires back on it and it was all good again. There’s just kind of a list of things.

“At Richmond, I had a really fast car and got run into right out of the gate. There’s probably about five races I could give you with just things that have happened. Everybody always has things happen throughout the year, but we’ve just had things happen more often than we typically would.”

The second half of 2015 was a bit of a rollercoaster ride for Mears, posting finishes ranging from 11th to 42nd. Again, the best runs were at Daytona, Loudon and Martinsville, with the intermediates representing the biggest challenges, though there were a few bright spots, like Charlotte, where for the first time the team was talking on the radio about aerodynamic issues and not their own setup, a significant change. If not for a crash at Homestead that was not Mears’s fault, he’d have finished a spot higher in points; as it was, he finished better than some drivers with significantly more funding.

All in all, call it a good year for Mears, not a great one… with one big exception. Mears announced a one-year contract extension earlier in the season, but fall brought even more good news when sponsor GEICO re-upped for three more years and wrapped up Mears for the duration, extending the driver’s contract through 2018. For a driver whose early career was marked by instability, bouncing from team to team, the latest chapter is a long one with little change other than improvement.

On a personal level, the year was a difficult one for Mears and the team. Mears lost his grandmother in September, shortly after Gail Germain, the wife of team owner Bob Germain, lost a long battle with cancer.

There’s still a lot of work to be done if the team is going to be a weekly top-15 or even top-20 contender, but they have the foundation to do it. The RCR partnership and solid sponsorship certainly benefit a fan-friendly driver (whose Twitter account is a must-follow for fans) that does an excellent job of communicating with his team throughout a race.

The only question mark heading into the season appears to be crew chief Robert “Bootie” Barker, for whom the team hasn’t indicated a contract extension yet. Barker and Mears have worked well together, and the team has been pleased with their progress, so there’s no real reason not to expect the core players will remain intact. That leaves Mears is excited for what the future holds, made clear in this tweet from Homestead:

Last race of the year! Proud of the progress the @GermainRacing team has made this year! Looking forward to today and can't wait for 2016!