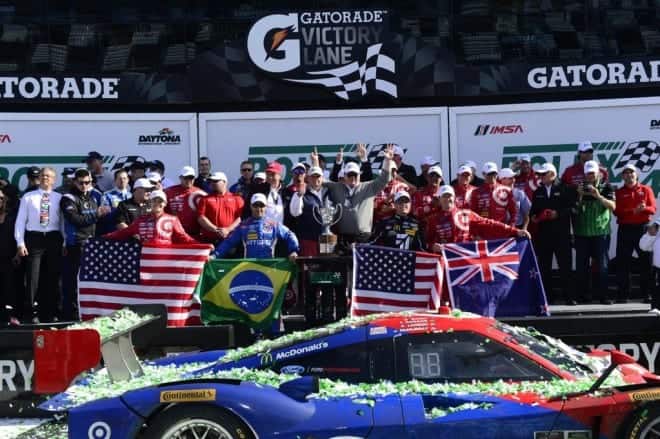 On Tuesday morning, Chip Ganassi Racing with Felix Sabates announced that they will field two Ford EcoBoost-powered Riley DPG3s in the Prototype January’s Rolex 24 at Daytona. The Ganassi organization is running the factory Ford GT program that will also field two cars in the GT-Le Mans class. As a result, the team will run under the banner of Ford Chip Ganassi Racing.

Sponsorship for the two-car effort was not immediately available. The press release states that an additional announcement is forthcoming for corporate partners.

The No. 02 will return the winning quartet from the 2015 Rolex 24 at Daytona. Ganassi’s Sprint Cup Series regulars Kyle Larson and Jamie McMurray will return for another go-around, along with Verizon IndyCar Series regulars Scott Dixon and Tony Kanaan.

Larson was already hard at work prepping for the race last week per his Twitter feed.

The No. 01 will be driven by four newcomers to the team. Former Grand-Am regular Brendon Hartley will be joined by former Formula 1 racer and Toyota factory driver Alexander Wurz, Andy Priaulx and 17-year old Lance Stroll.

Hartley previously drove full-time in the Rolex Sports Car Series for Starworks Motorsport in 2013 before joining the Porsche factory effort in the FIA World Endurance Championship. He’s coming off of a 2015 season in which he won four races and shared the World Championship with teammates Timo Bernhard and Mark Webber.

Wurz made his F1 debut in place of Gerhard Berger in 1997 at Benetton. Following Berger’s retirement, Wurz drove three full seasons for the team, finishing a career-best eighth in 1998 in the drivers’ championship. He had three career podium finishes. After retiring from F1, Wurz found a home in sports car racing, most recently anchoring the driver lineup for Toyota Gazoo Racing in the World Endurance Championship.

Priaulx is a four-time champion in touring cars (the 2004 European Touring Car Championship, along with the first three titles in the current World Touring Car Championship). Most recently, Priaulx has been competing around the world as a BMW factory driver. He drove most of the schedule in 2014 as part of BMW Team RLL in the GT-Le Mans class, but cut down to just a partial endurance schedule in Turner Motorsport’s No. 97 BMW Z4 GT3 last year.

Finally, Stroll is an up and coming racer currently competing in the European F3 Championship. This past season, Stroll won Race No. 1 at Hockenheim and finished a strong fifth in points. He will continue in the series in 2016.

Earlier in the season, Stroll also walked away from one of the most spectacular crashes of 2015. Racing for fifth at Monza with Antonio Giovinazzi, the two collided.

“We’re proud to have the defending Prototype Champions from last year, along with the excitement worldwide with the reintroduction of the Ford GT,” Ganassi said in the official press release. “I think we’ve built a very strong effort for the 2016 race in the Prototype class, which gives us two more solid chances to get to Victory Lane.”

For now, the Prototype entries for Daytona are just one-offs. Ford Chip Ganassi Racing plans to focus on the two full-time Ford GTs in the GT-Le Mans class. The team already announced their full-time lineups for the Nos. 66 and 67 back at Homestead in November. However, the additional endurance drivers for the team have yet to be announced.