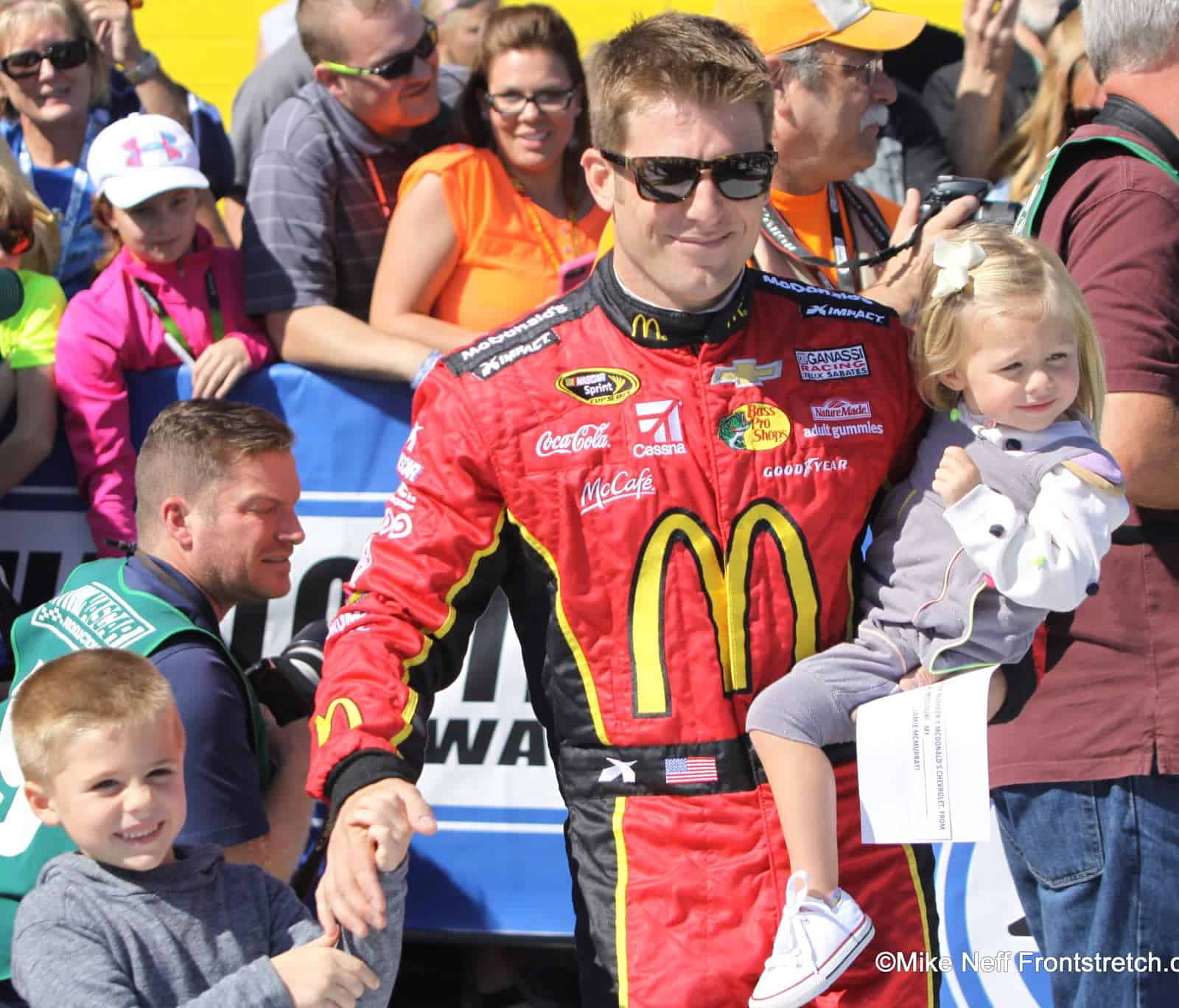 Jamie McMurray entered the 2015 NASCAR Sprint Cup Series season in familiar territory. While the previous year was statistically strong, featuring a career high 368 laps led for the Joplin, Mo. native, wildly inconsistent finishes prevented the team from making the Chase as they finished the season buried in 18th in the final standings. However, the team ended the season with five top-five finishes, a pole and 152 laps lead in the final 10 events, leading many to point to the No. 1 team as “most likely to succeed” once again in 2015, just as they were the previous season after a strong end to 2013.

Offseason moves threatened to stifle the momentum the team hoped to carry into Speedweeks as crew chief Keith Rodden, who worked with McMurray for just one season, returned to the No. 5 team and Kasey Kahne to replace Kenny Francis, who he worked under as team engineer for years. Rodden was replaced by 33-year-old Matt McCall, the team engineer for Ryan Newman, who boasted a resume deep with racing experience. While there was no question that McCall was qualified, it left McMurray in the position of forging a relationship with a new crew chief for the second consecutive year.

The duo got off to a rough start with a 27th-place finish in the Daytona 500 and a wreck that wiped out a strong third-place qualifying effort the next week in Atlanta. The combination’s potential started to show at Phoenix as McMurray again qualified third and finished in the runner-up position behind a dominant Kevin Harvick. The next eight weeks featured inconsistent finishes with three top-10 finishes sandwiched between five results of 11th through 21st. The following three races produced consecutive seventh-place finishes at Dover, Pocono and Michigan, placing the team solidly in Chase contention.

In the following weeks, McMurray and Co. would do just enough to hold on to their spot in the top 10 in points, mostly avoiding disastrous finishes but not contending for wins or even top 10s. While the team was virtually invisible on the track during the summer months, Chip Ganassi Racing found itself in the middle of the biggest silly season story of the year: Businessman and long-time co-owner of Michael Waltrip Racing, Rob Kauffman, announced he was leaving the team to join Ganassi. What followed was weeks of speculation about the MWR, Clint Bowyer and the structure of Chip Ganassi Racing for 2016.

Eventually, assumptions turned into reality as it was confirmed MWR would shut down at the conclusion of the season, Bowyer would sign a one-year deal with HScott Motorsports and Ganassi’s organization would remain exactly the same, except with much deeper pockets.

While the dust settled behind the scenes, McMurray found himself fighting for his first career Chase berth, which he earned when the checkered flag waved in Richmond. However, the team dug itself into a hole as the 39-year-old kicked off the Challenger Round with two uninspiring finishes of 16th and 14th at Chicago and Loudon respectively.

It would be the final race of the round at Dover that would define McMurray’s season in thrilling fashion. With just 40 laps remaining, the Chase rookie was three positions ahead of Dale Earnhardt Jr. and the top-12 cut-off. On lap 373, the final caution of the day waived because of oil left on the track by the expiring engine of Landon Cassill. During that round of pit stops, the No. 88 bunch made the necessary adjustments to fix the handling of their Chevy.

What resulted was an exciting side-by-side battle that ended with Earnhardt finishing one position higher than McMurray. As a result, the two drivers finished with equal points and the tiebreaker of the highest finish of the round going to Earnhardt.

Interestingly, both drivers earned their highest Challenger Round finish that afternoon in Dover, with Earnhardt finishing third and McMurray in fourth.

Unfortunately for the No. 1, the lack of victories bit them in the end; Earnhardt’s six bonus points compared to McMurray’s zero made all the difference.

The heartbreaking elimination appeared to take the wind out of the team’s sails. While it did record a second-place finish at Martinsville, it was one of only two top-10 results for McMurray following his dramatic run at the Monster Mile.

While the senior CGR driver’s results fell short of the numbers he put up during his 2014 campaign, he once again enters a new season with momentum on his side, this time stemming from a maiden Chase berth. Unlike last offseason, McMurray will be able to continue building the relationship with his crew chief as the team looks to take the knowledge and confidence from making the Chase in 2015 and turn it into an even deeper run in 2016.

Next season is a pivotal one for the 13-year Sprint Cup veteran as he enters the final year of his contract with CGR. McMurray will hope to recapture the magic from 2010 when he reunited with the owner who gave him his first shot at NASCAR’s highest level. It was that year he recorded a career-best three wins, but did not have the consistency to make that year’s Chase. Ironically, that same performance would have been good enough for a tie for the second place seed under the current format.

McMurray may also have longer-term considerations for his career as well as he will turn 40 on June 3. While he has performed longer than many competitors who tried to make it at this level, the age of 40 tends to be the commencement of the twilight of a driver’s career. The thought may very well have crossed the McMurray’s mind who acknowledged the retirement of Jeff Gordon, the driver he followed while growing up, after the return of the rainbow paint scheme of the No. 24 at Bristol.

The highlight of my night @BMSupdates was racing @JeffGordonWeb in that old paint scheme. I grew up watching him in that car.

But the age of 40 certainly does not indicate that a driver’s best years are behind him, either. Just look at Harvick, who entered his fifth decade in December and is enjoying the best years of his career. Having a bright young mind atop the pit box for the second year while the organization receives an infusion of cash from new co-owner Rob Kauffman, could provide McMurray with his best opportunity to transform momentum into a serious run at his first career championship.