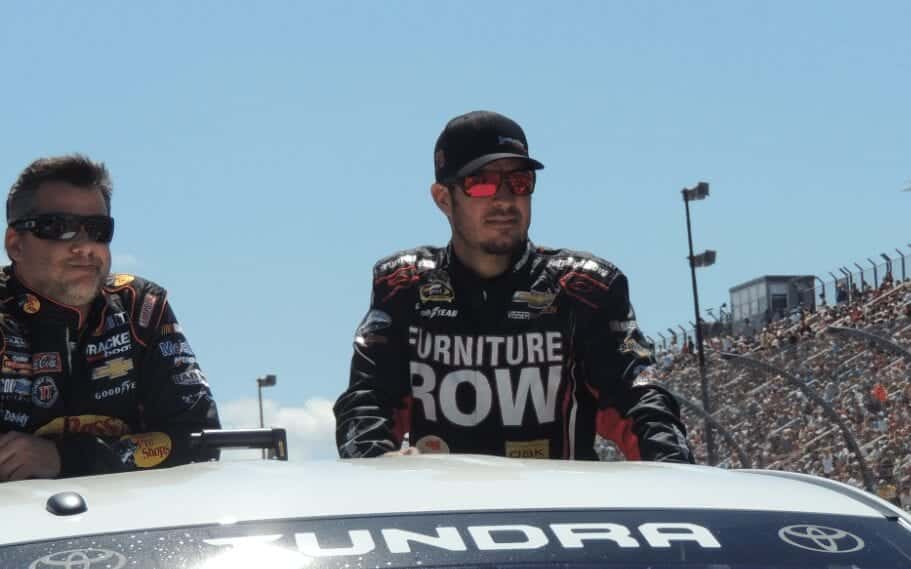 “I think that everything I do tends to root for the underdog.” – Judd Apatow, award-winning film director and producer

It’s safe to assume most of NASCAR Nation found themselves rooting for the underdog fairy tale that was Martin Truex Jr.‘s 2015 season. You had a driver battling back after a ride lost at Michael Waltrip Racing in 2013, the innocent victim of a scandal designed to manipulate NASCAR’s 10-race playoff. That left him competing for a formerly start-and-park, single-car team of Furniture Row Racing, struggling through a 2014 season that was clearly the worst of his career and paired with a girlfriend battling recently diagnosed ovarian cancer. How can you not pull for that type of comeback story?

Truex came out of nowhere, charging forward in 2015 with new crew chief Cole Pearn and landing on the precipice of a championship. With eight top fives and 22 top 10s, highlighted by a victory at Pocono Raceway in June, Truex and the No. 78 team finally became a championship contender through thick and thin.

I feel like the luckiest guy in the world right now. Never give up

How much of a surprise was this year? After only 14 races, Truex broke the team‘s single-season laps led mark recently held by Kurt Busch in 2013. And even before the Chase began in September, a ninth-place effort at Darlington Raceway broke the team’s single-season top-10 record (also held by Busch).

Despite their weekly power in the opening months of the season, establishing the No. 78 as one of NASCAR’s elite teams with the 2015 rules package it did not curb the notion this year was an underdog performance. Though Truex was the class of the field for the beginning of the summer stretch – leading 95 or more laps in four consecutive races from Kansas to Pocono – many still remained skeptical Cinderella could keep on her glass slipper.

Could the No. 78 team take it to Homestead? Would they keep this run going throughout the whole season? Will we see a single-car team as champion?

Starting the year with only one finish outside the top 10 in the opening 15 races, it wasn’t until the summer  began when the No. 78 team was brought down a couple notches. A 42nd at Sonoma preceded a 38th at Daytona in July, producing back-to-back DNFs.

In the span of the next eight races, the 35-year-old saw only two top-10 results. Those two races were the high-drag package events at Indianapolis and Michigan, producing a setup that proved to be Truex’s liking. Had the rest of the field caught up to a single-car team that didn’t exactly have the same level of resources as, say a Hendrick Motorsports or Stewart-Haas Racing?

Nope. Not at all. Approaching the New Jersey boy’s first Chase run in three years, Truex and rookie crew chief Pearn were ready to compete with the best of them once the green flag dropped at Chicagoland Speedway.

“I believe,” said Pearn before the start of the 10-race Chase, “We’ll just have to be faster than everybody else, make less mistakes and we’ll be there.”

The team achieved half of that statement, finishing no worse than 15th in the last 10 races. The consistency, though far behind the early-season pace, kept Truex in the game as the field dwindled from 16 contenders to 12 and then to eight.

The underdog fantasy soon turned into a reality following a 14th-place run at Phoenix as Truex made it to the Final Four in Homestead. He was placed alongside the comeback kid of Kyle Busch, the defending champ of Kevin Harvick and the last shot of Jeff Gordon. In some ways, Truex and team fit right in, slotting into their role as the underdog, the little team that could and did achieve their dream.

Unfortunately, though that’s as far as the fairy tale would go. Truex started 11th and struggled to find efficient pace to contend despite leading three laps. Coming home 12th, the result slotted Truex officially fourth in the championship, a mark which seemed unfathomable 365 days earlier.

Johnny Weissmuller, a competition swimmer and actor once said, “With but few exceptions, it is always the underdog who wins through sheer willpower.”

Despite no championship trophy for Truex, team owner Barney Visser and the entire snow-shoveling Colorado base, 2015 was not only a year to remember but a year to appreciate as they moved into position to contend for many more Sprint Cup Series titles.

“…left him competing for a formerly start-and-park, single-car team of Furniture Row Racing.”

Could you be anymore disrespectful to the 78 team?. This quote makes it seem like Truex went from a perennial cup contender in MWR to a backyard garage race team in FRR. The team has been a full time Cup team since 2010 (they’ve only been in existance as a NASCAR team of any kind since 2005). Won in Darlington in 2011 and made the chase in 2013. Martin was taking a job with a team that was on the verge of elite status coming off of a very good season with Kurt Busch at the wheel, not some poor, run of the mill, “start-and-park” team. The growing pains in 2014 were a mutual burden between Truex and this team

The driver seems to have earned respect from you. The owner and his team seem to have missed out on that somehow. This team competes and always has. A little more respect for the team itself is in order here.