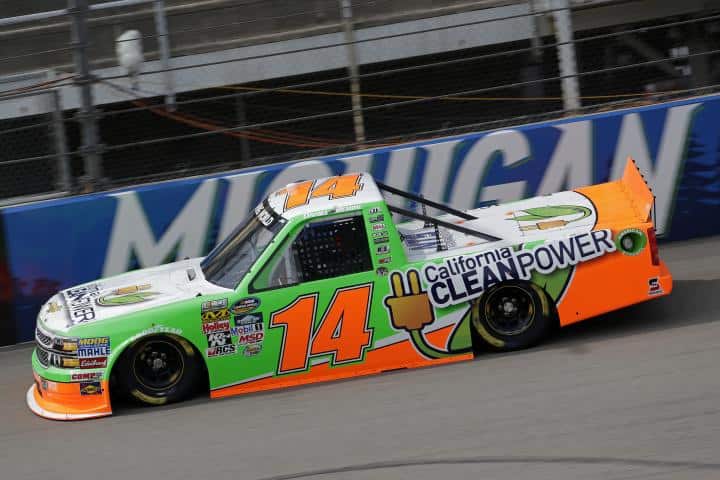 Following a Facebook post from crew chief Ryan McKinney about the immediate suspension of operations for NTS Motorsports’ NASCAR Camping World Truck Series program, the organization has confirmed it will continue to compete in 2016.

In an interview with Brennan Newberry, son of team owner Bob Newberry, he tells Frontstretch that while the organization’s future is currently clouded, rumors that the team is no more are false.

McKinney posted to social media the weekend before Christmas, discussing his departure from the organization, which first enabled him to serve on top of the pit box in 2014.

“Well, as this year comes to an end so does my tenure at NTS Motorsports,” McKinney wrote. “It has been a great three years. I am thankful to NTS and Bob Newberry for giving me my first shot to crew chief. I was so proud to be a part of NTS’s most successful season in the Camping World Truck Series.

“Daniel Hemric did such a great job and so did this whole NTS team. I want to thank each one of the guys on my team that dug so hard all year and never gave up. But with no sponsors or drivers signed up for 2016 NTS Truck program is currently suspended.”

Sad 2 say after 3 years my time @TeamNTS is over. With no sponsors the #NCWTS is on hold. After such a successful year looking 2 what 2016

However, the organization says it will continue on in 2016. Negotiations are underway for a replacement for Hemric, who finished the year seventh in the standings, with four top fives and 13 top 10s.

“He [McKinney] was released, but as far as the team shutting down, that is false,” Brennan Newberry says. “It is a business when you get into these levels of having other drivers. You need drivers and sponsors, and that also means you need money. There are a lot of good drivers and sponsors that we are in negotiations with and are talking to. Until the contracts are signed, you aren’t really sure of what is going to happen.

“On the NTS Motorsports side, we are 100% committed to pull the trigger at any time. We are just waiting on the secondary parties, like sponsors and drivers to put their names on the dotted line to get the funds for the team. We’re in a waiting period and it’s always scary for our employees. We have to look at our program as a business and as we would as a family. We have to think of our employees and we think of them as part of our family to give them the best opportunities and options going into the 2016 season.”

Along with McKinney, NTS Motorsports released an undisclosed number of employees, but Newberry notes that it was “quite a few of them.” The team is willing to rehire some of the crew members, but cannot do so until plans are solidified for 2016. The organization released the employees on the weekend of Dec. 19, according to Newberry.

NTS cannot solidify any driver-sponsor combinations until after the new year begins, when it can then proceed to the latter stages of negotiations.

Spencer Davis, 17, will pilot a full-time effort for NTS Motorsports in the K&N Pro Series East in 2016. Last season, he ran four events in the No. 20 car for the team, finishing sixth or better in each event. Davis, the 2014 Whelen Southern Modified Tour Rookie of the Year, also ran the first five Whelen Modified Tour events in 2015.

NTS made its Truck Series debut in 2012, and has since recorded 13 top fives and 42 top 10s. In 2015, the organization started out the year with two full-time trucks, but sponsorship woes prevented the No. 31 team with James Buescher from continuing past the third race. Instead, the second truck was split between drivers that could come up with funding for one-race deals.

Hemric, who previously piloted the No. 14, is moving to Brad Keselowski Racing’s No. 19 for the 2016 season.

What a great family atmosphere, laying off workers a week before Christmas. Hope to never see this team again.

This place has had some great drivers and crew chiefs who have all left. Doesn’t take a genius to figure out where the problem is!!!