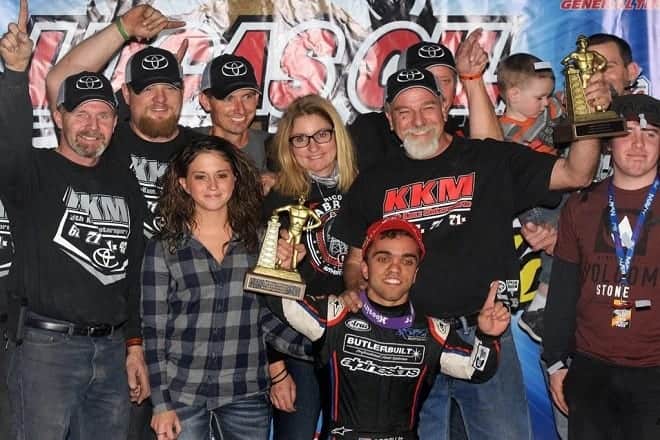 For the second time in as many years, Rico Abreu drove through the field to claim a Golden Driller.

Abreu made his way around leader Bryan Clauson with less than 10 laps remaining and held the 2014 winner off in the closing moments to win the 2016 Lucas Oil Chili Bowl Nationals in Tulsa, Oklahoma, successfully defending his 2015 triumph in the same race.

Starting in fourth, Abreu slowly worked his No. 97 Keith Kunz Racing machine through the field, working his way into the second position just before a red flag fell with 15 laps to go to set up the race-winning drive.

It would take a little lobbying from his car owner to make sure the position change occurred.

Abreu used an impressive slide job to work his way around Zach Daum for the position just before the caution flag fell with 15 to go. However, the initial ruling from race officials was that Abreu would have to surrender the spot because the lap wasn’t completed.

At the urging of Keith Kunz, race officials reviewed the decision after a medical incident off-track forced the race to be red flagged. The result of the review would prove critical, as Abreu was given the position.

From there, the battle came down to Abreu and Clauson, the 2014 and 2015 winners of the prestigious event.

Clauson, a former NASCAR XFINITY Series competitor and USAC Midget and Sprint Car champion, dominated much of the 55-lap event.

Starting on the front row, Clauson was mired behind Christopher Bell for the opening stint of the race. Clauson would inherit the lead on lap 10, when Bell misjudged a move around lapped traffic and spun his machine off-course.

From there, Clauson proceeded to dominate the middle section of the event, leading by as much as a straightaway in-between caution flags.

Clauson wouldn’t see a challenge for the lead until lap 45, when Abreu used another vintage slide job to claim the top spot.

Abreu wouldn’t relinquish the top spot from there.

Clauson fought back, coming within a car-length on the final lap, but lost any chance at challenging for the lead when his machine bounced awkwardly off the cushion in Turn 1. The Noblesville, Indiana native would ultimately settle for second.

In what many be his final race before embarking on a full-time season in NASCAR’s Camping World Truck Series, Abreu, 23, soaked in the moment, unleashing a wild display of donuts, jumping into Clauson’s arms from his machine and climbing the makeshift fence to salute the crowd at the Tulsa Expo Center.

After giving Abreu fits for much of the race, Daum would end the day in third. Jerry Coons, Jr., brought his machine home fourth, with Kyle Larson rallying from 20th to round out the top five.

After his disappointing spin from the lead, Bell would climb back through the field to end the night in 12th. NASCAR Sprint Cup Series regulars Kasey Kahne and Ricky Stenhouse, Jr., would end the night in 13th and 16th, respectively.

The caution flag fell five times on the feature, including twice for incidents involving veteran Sammy Swindell. Bell, Stenhouse and Alex Bright were among others involved in incidents throughout the 55-lap feature.

Abreu’s victory comes in the same week as the announcement of his 2016 plans. The Californian will compete full-time in the NCWTS with Thorsport Racing, joining two-time series champion Matt Crafton.

Crafton took to Twitter to congratulate his new teammate after the victory.

@@Rico_Abreu what an awesome drive tonight. Looking forward to having you as a teammate. #wheelman

While a more restricting move to NASCAR may be in the near future, tonight Abreu can celebrate a rare back-to-back triumph in one of dirt’s biggest races.

I wonder who his sponsor will be…. http://www.pedalextenders.com/ ???