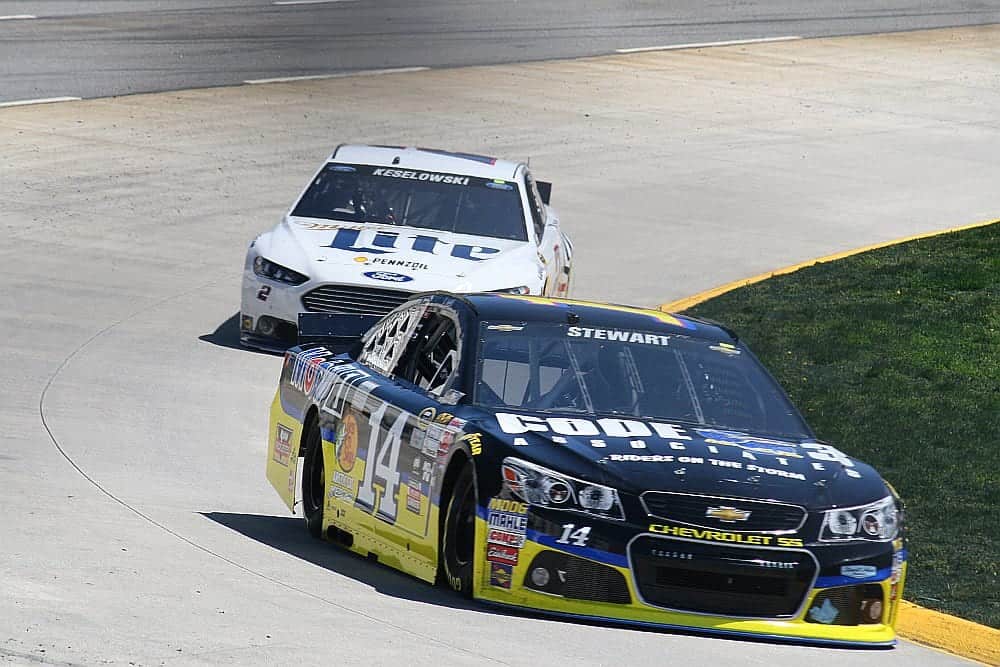 Heading into 2016, which team can fans expect to have a breakout year?

Aaron Bearden, Assistant Editor: HScott Motorsports. Don’t expect the team to find Victory Lane, but in its third season, and with the Hendrick Motorsports affiliation and Clint Bowyer joining the team, HSM could be set to shock a few people and perhaps even contend for a Chase berth a la Kurt Busch with Furniture Row Racing in 2013.

Mark Howell, Senior Writer: The time seems right for two teams in 2016: HScott Motorsports with Clint Bowyer and Chip Ganassi Racing with Kyle Larson. Bowyer is in a good place (at least for the year), and Busch is ready to show his talent by finally making it to Victory Lane. I expect good things from these two organizations.

Sean Fesko, Contributor: Money talks, and two mid-tier teams have gotten much-needed funds for 2016 and should be primed for a breakout year: Chip Ganassi Racing and HScott Motorsports. For Ganassi, the pieces have been there for a couple of years and they actually made the Chase in 2015. With Rob Kauffman’s money boosting the team, don’t be surprised if both Kyle Larson and Jamie McMurray make the Chase due to wins and not points. Likewise, HSM has 5-hour Energy funding, an alliance with Hendrick Motorsports and a more-than-capable driver in Clint Bowyer. That team is going places, if only in 2016 before Bowyer jumps ship.

Amy Henderson, Senior Editor: I think you’re looking at teams at different levels here.  Among the elite teams, Richard Childress Racing has been so close for a couple of years and it really seems like if it can find one or two things, the team will contend for wins. And if that happens, look for satellites JTG Daugherty Racing and Germain Racing to pick it up a notch as well.  Looking deeper in the field, I think that the money Brian Scott brings will only help Richard Petty Motorsports pick it up, and I also like the direction in which Tommy Baldwin Racing is headed.  Finally, it could be a big year for the Wood Brothers — Ryan Blaney ran well everywhere he raced, even if the final result didn’t reflect that, and with a full schedule this year, it could be an exciting year.

Mike Neff, Short Track Coordinator: Depending on your definition of breakout, the status quo will hold true for the most part in 2016. You can always have a surprise at a plate track or a road course but you can assume the big dogs will still dominate Victory Lane. The team that will make the most strides is HScott Motorsports. With their one-year deal with Clint Bowyer the team will get feedback from a Chase driver and, with a little luck, just might contend for a spot in the playoffs.

Let’s talk drivers for a minute.  There’s a lot of talent in the Cup Series at any given time, but who’s the best of the best right now?

Neff: It is hard to pick against the defending champion. He had a remarkable season with the comeback from the severe leg injuries to the title. He continues to add to his record win total in the XFINITY Series and is almost the all-time win leader in the Camping World Truck Series, though he’s not scheduled to run any races at this time in the series. Busch has won many of the biggest short track races in the country. He also won on dirt in the Prelude to the Dream. While Kevin Harvick is absolutely in the discussion, it is Busch  at the top of the mountain right now.

Bearden: The obvious answer would be Kyle Busch, but I’ll say Joey Logano. He won or came very close to it on short tracks, superspeedways, road courses and more. Logano’s only 25 years old, but he’s rattled off 11 wins in two years, including a Daytona 500, and outshone 2012 Sprint Cup Series champ and teammate Brad Keselowski in the process. Sliced Bread’s finally turned into the real deal.

Howell: While Kyle Busch is the man of the hour, I think we’ve got to give Jimmie Johnson his due. Six-Pack has the ability, the team and the enthusiasm to continue his winning ways. Once he gets the new format figured out a bit better, he’ll be lifting a seventh Cup trophy.

Fesko: After last season’s run to the championship, it would be easy to say Kyle Busch. His talent is undeniable, but it isn’t so cut and dry when you consider the two-season stretch that Harvick has had. Since joining Stewart-Haas Racing, Harvick has won eight races, finished in the top 5 in more than half his starts and in the top 10 in 67 percent. Since he and his team have self-destructed on the way to more than one win, however, I’ll have to make it a tie between the last two Sprint Cup champs.

Henderson: He may be aging and a bit past his prime, but until he steps away 11 months from now, Tony Stewart is the best pure driver out there.  The man is a three-time champion, but he’s also an IndyCar champion and a USAC Triple Crown winner. Nobody else in racing right now comes close, with the possible exception of Juan Pablo Montoya in IndyCar, and even he’s a weak second.  Jimmie Johnson is smooth, tenacious and brilliant; Kyle Busch is pure speed loosely packaged; Joey Logano is the best thing since sliced bread. Stewart is a cut above.

Tony Stewart will step away from Cup competition after the 2016 season.  Realistically, what can we expect from Smoke in his last hurrah?

Fesko: It all depends on how well Stewart can adapt to the new low-downforce package. If he can figure it out, even if it takes him a few months, watch out. Smoke is hungry to go out on top, and he’s said he won’t race with kid gloves in his final season. His bucket list is big, and Stewart is one of a handful of drivers that could actually accomplish everything in a season.

Howell: Stewart is finally getting the car he’s wanted for a long time. I’m thinking he’ll be a solid top-10 contender with a decent shot at winning at least one race come summer. As long as Smoke doesn’t get caught up in the farewell tour hoopla, he should have a respectable final season in Cup. One question: Will Eddie Gossage give him a pony?

Neff: Realistically Stewart makes a run at a fourth title. It might seem ridiculous after the dumpster fire that was his 2015 season, but the low downforce package plays right into Stewart’s hands. He will most certainly get back into the Chase, and then anything is possible. Stewart wants to start off with a win in the Daytona 500 to avoid being lumped in with Rusty Wallace and Mark Martin as great drivers who’ve never won the 500. He also wants to score a win at Darlington, where his best runs are two third-place finishes. In the end, expect Stewart to be back to his championship contender form and possibly pull off what Jeff Gordon couldn’t: a title in his final race.

Henderson: Like I said above, Stewart is one of the best pure drivers we’ve ever seen.  His step has slowed and his passion for driving a Cup car has fizzled a bit.  He’s not the driver he was in his prime, but he is capable of winning races, and this year’s rules suit him much better than what we’ve had the last couple of seasons.  Wins might be a stretch given Stewart’s recent performance, but I do think we’ll see his best year since his injury.

Bearden: With a rules package more to his liking, I’ll say eight top 10s, a couple top 5s, some hilarious interview snippets, maybe a sneaky victory, and a step back down to the short track racing he loves following the season.

A few teams made changes in the offseason, but many teams went with the status quo instead.  Which team most needs a shakeup to improve performance in the new season?

Howell: The massive makeover needs to be at Roush Fenway Racing. That team’s been stuck in a death spiral for too long, and no amount of personnel shifting seems to help. Maybe it’s time for the organization to make some tough choices and shake up its driver lineup. Such changes are neither easy nor popular, but drastic times call for drastic measures.

Henderson: Going out on a limb here, but I would have liked to see Darian Grubb’s role at Hendrick Motorsports as Jimmie Johnson’s crew chief.  Johnson’s performance has suffered slightly the last couple of seasons because of some questionable calls by Chad Knaus.  It just doesn’t seem like the old spark is there.  Johnson can win a seventh title, but in this Chase era, I’m not sure he can do it with Knaus.

Bearden: Richard Childress Racing. Roush Fenway Racing seems like the obvious choice, but it’s going to take more than a switch up to add the speed it’s missing. Childress is one or two tweaks from winning races and contending for a title.

Neff: It is easy to pick on a good team when it’s down, but Roush Fenway absolutely needs to do something to light a fire under the organization. If Stewart’s season was a dumpster fire, RFR’s was a forest fire. The organization was simply unable to find the speed necessary to compete with the rest of the series in 2015. Its driver lineup consists of a seasoned veteran who is in the twilight of his career and two drivers who are still searching for the formula to run up front. RFR has made some crew chief changes for 2016; we’ll see if that is what it takes to put the team back up front where it used to run.

Fesko: Roush Fenway Racing, no doubt. It shuffled crew chiefs around, but it won’t be enough. The team’s cars are part of the problem, but its drivers lack the fire that it takes to succeed in Cup. Greg Biffle could win races – he has before – but age is catching up to him. Ricky Stenhouse, Jr. has regressed in each season since his rookie campaign, and Trevor Bayne didn’t show any speed last season. I’m surprised at least one of these drivers didn’t get the boot after 2015 in favor of Chris Buescher. It might be the only way to right the ship.

1 thought on “Faceoff: Who’s the Best In NASCAR?”