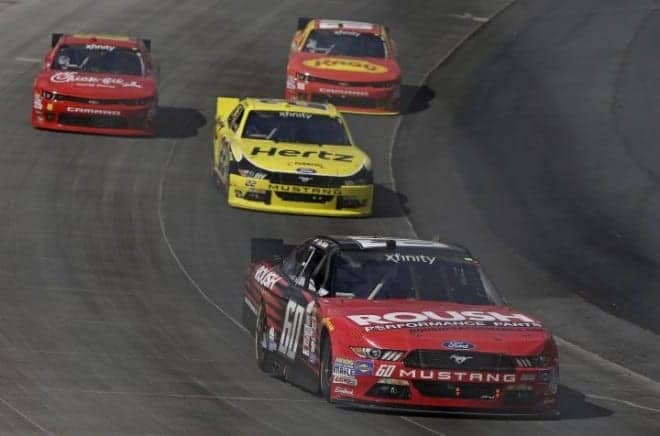 As NASCAR looks to entice the younger demographic, the sanctioning body has announced the addition of a playoff format in the XFINITY and Camping World Truck series. The format, similar to the newest version of the Chase for the Sprint Cup adapted into NASCAR’s premier division in 2014, will be implemented for the 2016 season.

After months of rumors, incorporating a playoff system to the lower tiers of NASCAR will enable consistency for drivers moving up through the rankings, according to NASCAR Chairman and CEO Brian France during Tuesday’s State of the Sport address. Like the Cup Series, the Chase in XFINITY Trucks is a win-and-you’re-in format, with 12 drivers being featured in the XFINITY Series playoffs and eight in the Truck Series.

“Fans, partners and the industry have embraced the new Chase format like nothing we’ve seen in the sport’s history,” said France in a press release. “Winning never has been this important, and the excitement generated the past two seasons in the Sprint Cup Series has led to this implementation of the Chase format in all three national series. Competition in both the NASCAR XFINITY Series and NASCAR Camping World Truck Series will undoubtedly elevate to new heights and shine a spotlight on the rising stars of our sport.”

Each Chase will consist of a seven-race battle for the championship, with each division beginning its playoff series at different racetracks.

The XFINITY Series Chase will begin at Kentucky Speedway, with the Round of 12 continuing at Dover and Charlotte. Meanwhile, the Truck Series Chase starts at New Hampshire Motor Speedway with the Round of 8, with the series advancing to Las Vegas and Talladega. There will be two elimination rounds in each division, with a Championship 4 fighting for the title come Homestead.

Chase drivers in both divisions will have their point total reset to 2,000 markers at the start of the playoffs. In the second round for both series, the remaining drivers will have 3,000 points, with the Champion 4 resetting to 4,000 points.

The second round of the Chase for the XFINITY Series will feature events at Kansas, Texas and Phoenix. For the Truck Series, Round 2 will visit Martinsville and then have companion events with the Cup Series and XFINITY Series for the final two events of the round.

In addition, Cup Series drivers that made the Chase in 2015 will not be enabled to race in the final contest at Homestead in the lower ranks, giving the spotlight to the drivers battling for the championship.

A charter system is likely coming to NASCAR, according to France. However, the announcement did not come on Tuesday. Instead, France said that a decision is close on deciding the specifics of the charter system for Sprint Cup Series team owners, stating that it “will make the racing better in the long run and secure the ownership experience.”

With this crap and the stupid 20 minute rule in the trucks, I am officially out, done with this manufactured crap. I can’t stand reality tv shows and that’s all NA$CAR is any more. I will stick to the dirt tracks and dirt tracks only. NA$CAR, go piss up a flagpole.

Hey, let’s take a point system nobody likes & extend it to two series that nobody watches… Nero had nothin’ on BZFs fiddle. BZF recokons he’s more cultured than us Southerners so I imagine it’s a violin, not a fiddle…

When does college football come back on?

stick a fork in it…..brain fart has killed everything that he’s touched.

college football comes back in august. baseball around the corner

It’s official! Brian France has lost his mind! Either that, or the drugs have burned out his brain.

Oh well, does it really mean anything for these two series anyway. Who watches them?

DISLIKE button – CLICK! CLICK! CLICK! Idiotic! Where to these people come up with this harebrained BS? Smh! As it has with the Cup series, where a guy who missed 11 races was handed the Cup in ’15, inclusion of “chase format” gimmick alone will destroy the integrity of everything it touches! …and also prove to be an epic FAIL! I have been a NASCAR fan my entire life (+40 years) & I have become more disenfranchised with every passing season. NASCAR & Brian “Danny Boy” France is officially on my fifth rung, below IMSA, IndyCar Series, SCCA Trans Am & F1 …so I wont be spending any of my disposable income on CWT series or NXS anytime soon!

I can hardly wait to see what the NEXT round of gimmicks will bring.

Words cannot describe this idiocy. The man and his yes man truly hate what is left of the fan base. They must, cannot be another reason. Good freaking grief. Just when you think he cannot come up with any more stupid stuff cause you think he used up all his stupid ideas…surprise!!! But not really. :(

I won’t address how dumb this all is, becasue everyone else pretty much has addressed it here. But I have some questions:

Does anyone think that there are 8 drivers in the Trucks every year worthy of of making the Chase?

Does anyone think that there are 12 drivers in Xfinity every year worthy of making the Chase?

Re: Countdown Clock: What happens if 20 minutes runs into the last 10 laps. Nobody has really addressed this. Do they keep it green or do they throw the yellow with say 8 to go?

I’m starting to believe France is getting paid to kill off the fan base of this sport. He seems to be doing everything possible to tick off fans, drivers, sponsors etc. Don’t be surprised to see a mass exodus of Cup drivers in the next few years. They are getting up there in age and they don’t appear to enjoy this new championship format. I still believe Gordon and Stewart getting done has everything to do with the state of Nascar now. Others will follow.