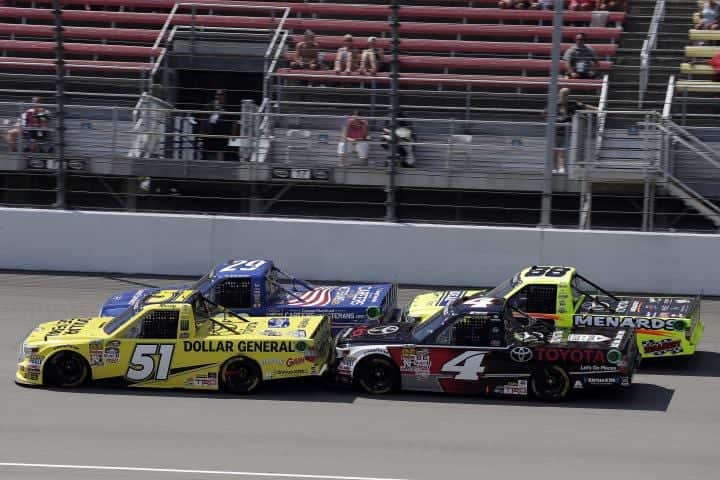 Racing will be quite different in the Camping World Truck Series come the 2016 season, with NASCAR introducing the creation of a caution clock for the sport’s third-tier division.

The clock, which will be present at all races with the exception of Eldora Speedway, will be set in 20-minute intervals. Beginning at the wave of the green flag at each event, once the clock expires, it will automatically bring out the caution flag. If the yellow flag comes out at some point during the 20-minute interval, the clock will reset itself once the green flag comes back out.

At each race, the clock will be on until 20 laps to go, enabling the drivers to battle for the final 20 laps in green-flag conditions. However, at Pocono Raceway and Canadian Tire Motorsport Park, the clock will shut off with 10 laps to go due to the lower lap count. The move also means that there will be few green-flag pit stops during the season, taking away the need to conserve tire wear throughout the majority of the season.

Going back to the old school way of racing, the XFINITY Series will feature heat races during select events in 2016. With the return of the Dash 4 Cash competition, there will be an extra challenge for drivers competing for the cash incentive.

Bristol and Richmond in April, along with Dover in May and Indianapolis in July, highlight the four Dash 4 Cash events throughout the year. The top two XFINITY Series regulars in each heat race will be eligible for the bonus, with the highest finishing of the four drivers taking home the $100,000 bonus. Winning multiple Dash 4 Cash events will automatically qualify a driver for the 2016 Chase in the XFINITY Series.

DISLIKE button – CLICK! CLICK! CLICK! Idiotic! Where to these people come up with this harebrained BS? Smh! As it has with the Cup series, where a guy who missed 11 races was handed the Cup in ’15, inclusion of “chase format” gimmick alone will destroy the integrity of the CWT series. “Caution clock” will destroy the integrity of each & every race! …and also prove to be an epic FAIL! I have been a Nascar fan my entire life (+40 years) & I have become more disenfranchised with every passing season. Nascar & Brian “Danny Boy” France is officially on my fifth rung, below IMSA, Indycar, SCCA Trans Am & F1. …so I wont be spending any of my disposable income on CWT or NXS series anytime soon!

It may seem bad at first glance, but with the clock, there won’t be nearly as big of a need to conserve tires, which could set up for better racing throughout an entire event. I’ll wait to see it in action before deciding.

Bad ideas all the way around. The only good thing is that the caution clock will at least be more legitimate and trustworthy than debris cautions.

The truck series is supposed to be a place for drivers to gain experience, as they move up! No green flag pitstops, no long greenflag runs, no need to conserve tires, no need to use pit strategy!? This relates to Cup racing, how?

NASCAR is becoming a complete joke! Years ago I would tape the races so I could watch them again during the off season. Now I don’t even bother turning on the TV to watch many of them.