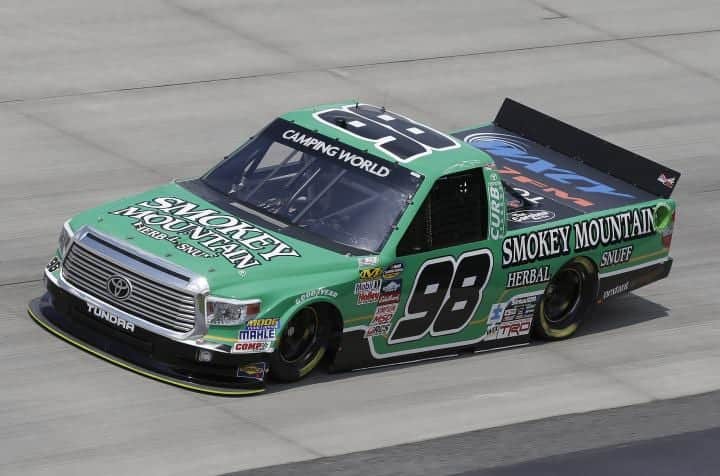 On Friday morning in Tulsa, Okla., ThorSport Racing announced that Rico Abreu, most recently of HScott Motorsports with Justin Marks in the K&N Pro Series East, will join the Ohio-based operation on a full-time basis in 2016.  Abreu will drive the No. 98 Toyota Tundra with sponsorship from Curb Records.  Doug George, a former champion of the K&N Pro Series West and former competitor in the Truck Series, will serve as Abreu’s crew chief.

The 22-year-old open wheel veteran is looking forward to his first full season in the trucks.

“This is one of the best opportunities I have been given,” Abreu said during a press conference.  “My team, sponsors and fans will know that I’m giving 100% effort every time I’m at the track and on the track. My goal is to get the most out of every lap and every opportunity this season. I’m looking forward to meeting new fans and representing ThorSport and Toyota well.”

ThorSport Racing owner Duke Thorson said he is excited to have Abreu onboard.

“We look forward to Rico joining our race team in 2016,” Thorson stated.  “Rico has proven himself at every level in racing to date, and is a winner and true racer in every sense of the word. He brings a style and attitude that reflects who we are, and what we are all about. We are prepared to give him every single opportunity to win, and look forward to seeing what he can do in his first full-time season in the Truck Series.”

Last season, Abreu made his transition to stock car racing and spent the early part of the season learning how to race the heavier cars (the move was announced very late, after Abreu had won the Lucas Oil Chili Bowl Nationals and less than a month before the K&N Pro Series East season opener at New Smyrna Speedway).  However, it didn’t take long for Abreu to find his sea legs.  Abreu won his first of three poles at Langley Speedway in just his sixth start.  His next race, the NAPA 150 at Columbus Motor Speedway, saw Abreu win the pole, lead 86 laps and take his first career win.

By the end of the season, Abreu had earned four top-5 and eight top-10 finishes, good enough for fifth in points.

Abreu also started the final two Camping World Truck Series races of the year at Phoenix and Homestead for NTS Motorsports.  He crashed out in Phoenix, but had a rather uneventful run to 13th at Homestead.

I hope Thorsport has upgraded their pit crews for Rico. Just ask Johnny Sauter how great the pit stops were last year.