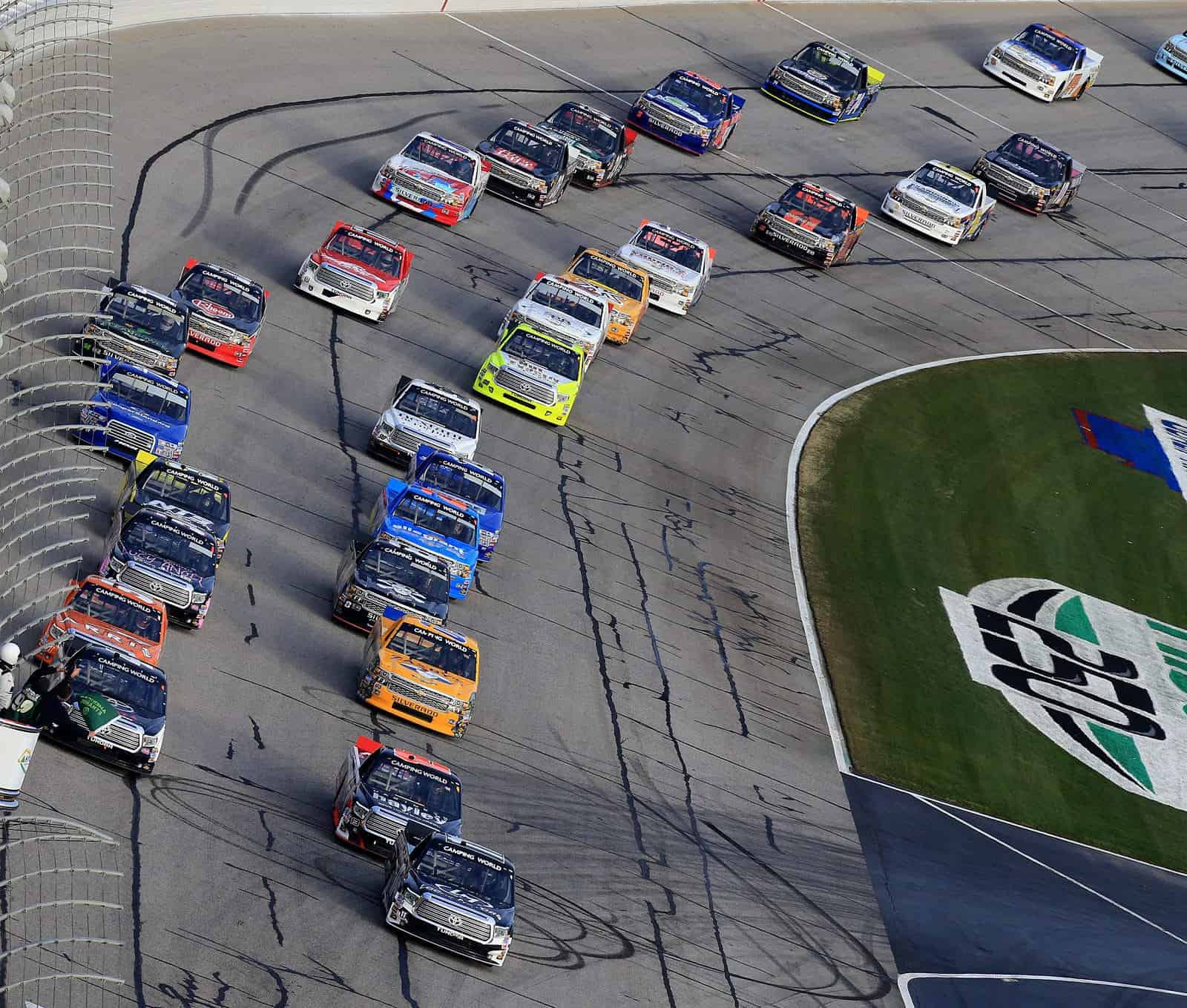 NASCAR’s media tour at Charlotte Motor Speedway opened with a bang on Tuesday. Among other announcements, the sanctioning body introduced a Chase format for the Camping World Truck Series that will feature eight drivers competing for seven events in a battle for the championship. A decision that many fans dreaded, the elimination format will mirror the one that has been used in the Sprint Cup Series the past two seasons, though with some modification.

The seven-race Chase will feature eight drivers competing for three rounds, while the final four remaining will settle the title at Homestead-Miami Speedway. Drivers will receive three bonus points for victories during the first 16 races of the year, and at the end of each round, two drivers will be eliminated from the championship battle.

Fans have long railed against the Chase, claiming it cheapens the championship. In fact, I’ve even seen references to not being a legitimate champion. Whether a champion crowned under the Chase is legitimate is really open to interpretation, but NASCAR Chairman/CEO Brian France claims “fans love elimination style, they love the emphasis on winning, and so that’ll be a welcome addition in both those series.”

I’m not convinced fans will embrace a Chase in the Truck Series; actually, I expect many more to tune out and quit watching or attending. Part of what helped to keep the series unique and one of its own was that the title was still determined by the full season, and if the champion managed to run away and clinch ahead of the season finale, they definitely earned it. In fact, in those seasons, I never heard any fan outcry complaining that it was awful to know the champion before the last race of the year.

Aside from the fan excitement aspect of introducing the Chase to the series, France also expanded to explain a benefit for the up-and-coming drivers in the series too.

“For the drivers, I think it’s also important that they get conditioned to what it’s going to take to,” France said. “It’ll make them better prepared to handle the next level.”

Huh? I thought that was the point of a rookie season and that bright yellow tape on the back bumper. Sure, it’s a different championship format to drive, however is that Chase experience really all a driver needs to prepare for the next level? I think it’s more being prepared for the higher level of competition and talent, and that’s something that only comes with seat time in the next series.

In addition to the creation of a Chase for the Truck Series, NASCAR also introduced a caution clock. The concept is rather simple, really. With the exception of the Mudsummer Classic at Eldora Speedway, each race will feature a caution clock, set for 20 minutes, that will start at the drop of the green flag. If nothing happens on the track to bring out a yellow flag, a competition caution will fly, and the clock will be reset. When an event gets down to 20 laps remaining, the caution clock will be removed and drivers will be left to settle the race under the old rules, with the only exception being Canadian Tire Motorsports Park and Pocono, where that timeframe shrinks to 10 laps to go.

“We think it’s going to add to the strategy during the race, and if you look at the Camping World Truck Series, that is an area where some of our younger drivers, younger teams, newer teams really can use the competition caution to be able to adjust on the truck,” Steve O’Donnell, executive vice president and chief racing development officer for NASCAR, said. “We’ve seen that in the Cup Series when we’ve had a competition caution early in the race. It’s allowed the teams to make some last-minute adjustments early in the race.”

I’m usually not one to condemn an idea until it’s been put into practice, because you never truly know how something will work out until it’s tried. But frankly, the introduction of the caution clock simply amounts to an easy way to throw a phantom debris caution. Rather than needing to chatter on the officials communication channel about some random piece of something sitting on the track that no one can see, NASCAR is simply guaranteeing that regardless of what happens on the track, the field will always be pulled right back together every 20 minutes.

Don’t get me wrong; I’m all for tight racing. After all, side-by-side battles and beating and banging are what drew me into the sport in the first place, and it’s what has appealed to me for so many years in the Truck Series. But to take a team that has worked so hard to put a fast truck on the track and punish them by taking away a lead that was earned seems almost akin to participation trophies often handed out to young children playing sports. In reality, it’s just another gimmick that NASCAR thinks will improve the on-track product but will instead turn away those long-time fans that have turned to the Truck Series as their last, best hope for a piece of the earlier days.

With all of that said, it’s certainly possible that my tune will change after seeing the caution clock in use. After all, could it be that the yellow usually flies within that 20 minute timeframe anyway? A quick calculation using the run time for the first four races (Daytona, Atlanta, Martinsville and Kansas) last year shows that, more often than not, the caution flew for an on-track incident before the clock would have expired. The numbers that I came up with were a bit of a reality check about how often the clock will actually come into play. It doesn’t change my view of the clock as just another gimmick, though.

Despite the changes that NASCAR threw out there for the 2016 season, the teams that have declared they will be running full-time this season, combined with those that have not yet made their announcements, leave hope for the future of the series that looked like it was dying a slow, painful death not that long ago.

I just hope the sanctioning body doesn’t kill the series by trying to fix what wasn’t broken.

Beth, nice to see you join the club. We all are confused and having a bunch of “what the fluck” moments. Those moments should not be so often in a pretty simplistic sport. But BZF marches on with his yes men right behind him. Shame on those sellouts…

If I remember correctly last year many were complaining about the state of the truck series, and that something had to be done. Well it has surely been. Will it be an improvement? We shall have to wait and see, but, somehow it seems wrong. My gut tells me that they have just made this no more than riding around burning up gas until the end.

“Caution clock” is the most idiotic & counter-intuitive harebrained thing I have ever heard of in motorsports. This lone fell swoop replaces the best racing action in Nascar, with a global mockery & laughing stock that I hesitate to a race! This is like clearing the scoreboard of an NBA, NFL or NHL game after every quarter! I’m dumbfounded!
CWT & NXS “chase” “…getting drivers ready” is a moot, if not comical point by a whack of pseudo-politician corporate double-talking heads in Sears sucker suits.
Prior to the advent of, & even during the “chases” drivers give 100% effort for wins & best finishes, all the time. It is impossible to give more than your best effort & “chases” do not change that unassailable equation. If anything, “chases” create an environment where there fiscally responsible to coast at certain times & during certain races. If you have won early in the “regular” season, (ie: in ’15 Cup #2), you are locked in the “chase” &, in a way, it makes sense to dial it back & not tear up race cars or waste tires. And ‘chases’ also cause the UNSPORTING utter BS we saw with #4 at Dega & the whole #20 vs #22 mess at Martinsville, neither of which is there any “getting ready for”!
Seasons where championships were decided prior to the last race where so because drivers & teams earned it via dominate season & DESERVED IT! “Chases” PENALIZE dominate performers (in ’15 – #22) & creates an environment were teams & drivers who [miss 11 or 24 “regular” season races, &…] don’t deserve it are handed the Cup at the end of the season. This is systemically manipulating & devaluing a season long, historically righteous & iconic 36 race championship, that formally was the epitome of motorsports championships …into one race! Why would people with no interest in motorsports & short attention spans suddenly be interested in motorsports AFTER you have destroyed all of it’s integrity? Furthermore, why would such newbies watch, go to or pay attention to any of the “regular season” or “chase” races, if it is all boiled down to what happens during the final race?
Imo these “chases” are like shooting yourself in the gut, to not spite your foot! Idiotic, and imo, a sure indication that Nascar’s demise is on the horizon!

Never mind that historically many of the top Truck Series drivers are not up and comers, but rather drivers like Sauter, Bodine, Skinner, Musgrave, Benson and so on that had and lost multiple Cup rides. So the idea of a Chase preparing drivers for Cup is a reach to say the least.

So true…they keep trying to tell you that every single person in the lower series are basically in training to get the big show. Bull. Many folks have fine careers in the lower series and earn a living for their families. Team owners are fine with it, a lot of the drivers are fine with it, with no plan to go anywhere else. Just another lie spewed from Castle Daytona.

I have not one time witnessed anyone or “they” saying that ‘every single person in the lower series are basically trying to get to the big show” and I doubt you have. If so, tell me exactly who said it. I won’t hold my breath…

I don’t like the idea of a “caution clock”, but I’ll take a wait and see approach. The Trucks used to have a “half time break”. People have been throwing this idea out for the last few years. I’m a little curious to see it in practice. I’m ambivalent about a Chase in the lower series. However, it could give some of the smaller teams some of the spotlight if they qualify.

“After all, side-by-side battles and beating and banging are what drew me into the sport in the first place