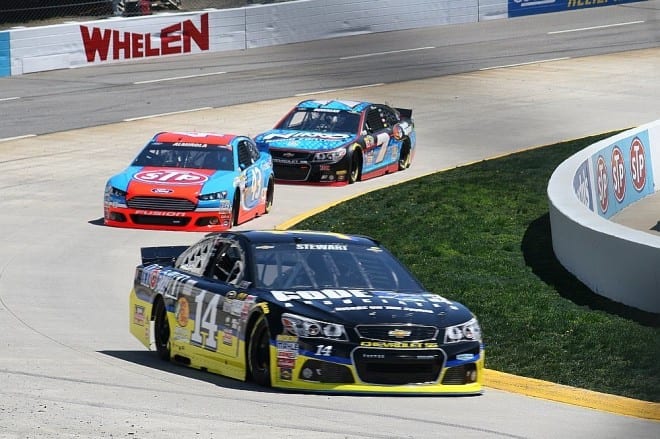 Friday Faceoff: Did NASCAR Add Too Many Gimmicks?

NASCAR announced several changes last week, including a caution clock in the Truck Series. Is this going to change anything in terms of what fans see on track and/or for race teams?

Clayton Caldwell, Contributor: The caution clock was a gut shot to me when I first heard it. I don’t mind the Chase in both the Truck and XFINITY series, but the caution clock is something I will never buy into. It totally ruins the integrity of the sport and will produce lackluster results other than five laps after a restart. I can’t wait to see drivers run single file for the first 80 laps in the Daytona truck race only to have a wreck fest in the last 20. It’s going to be ugly. You have to wonder if the powers that be care at all about racing or just entertainment. If people want to see wrecks, go watch a demolition derby! This is racing, and the caution clock ruins racing.

Sean Fesko, Contributor: The rationale for the caution clock was to give younger drivers more chances to work on their trucks in order to be competitive. While I think that’s a nice sentiment, drivers don’t get those extra chances in the XFINITY and Sprint Cup series, so why should they have the opportunity to do so in Trucks? The new rule isn’t going to prepare them for the inevitable longer runs in the upper series, and they need the experience of running an ill-handling race vehicle for laps on end to grow.

Amy Henderson, Senior Editor: While I don’t think the caution clock will make a terribly big difference in the CWTS races as there are generally a good number of cautions anyway, I don’t like the premise one bit.  It’s not about letting teams work (and they should be learning in the K&N Series, not a national touring division), it’s about artificially tightening up the field at regular intervals — and in doing so, it takes away pit strategy in an era where teams have few places to strategize.  I’m also suspicious in that I wonder if implementing it in Trucks, where it won’t have as big an impact, is part of a plan to sneak it into other series later on, when NASCAR can say, “but it didn’t even come into play very often in trucks, and it made the racing more exciting.”  It’s manipulation of races, and that’s not good for the sport at all.

Jeff Wolfe, Senior Writer: One of the things I have always liked about NASCAR is that there is no clock for the length of the event. Sure they race against the clock, but we all know a race can go on for a long time. No limits of any kind on how long something will last. Just the idea of a clock being involved in anything other than telling us speeds is not good.

Several smaller teams, including Tommy Baldwin Racing, Front Row Motorsports and BK Racing, have announced team and driver changes recently. Which team made the best move as they look to improve in 2016?

Henderson: I like the moves made by all three teams.  Dropping to two teams was a smart move for FRM and BK, and FRM added two big talents; Landon Cassill may be the most underrated driver in the series right now. I’m also really pleased that BK stuck with Matt DiBenedetto, because he’s got a ton of raw talent. TBR adds a veteran driver with a little more star power (thanks, Junior!), and while I don’t love what I’m hearing about how it went down, we also really only heard one side of the story, so jumping to judgment isn’t happening from me. A final shoutout to Circle Sport-Leavine Family Racing for going full time and aligning with Richard Childress Racing; that’s a big step.

Mark Howell, Senior Writer: I think Front Row Motorsports is poised to do some great things in 2016. Its addition of Landon Cassill was a smart move that will only strengthen the team. In comparison, I thought how Tommy Baldwin Racing handled its dismissal of Alex Bowman was anything but proper. Learning of his job loss via Twitter was nothing less than an insult to Bowman and all he did for the team. I’ve always admired Tommy Baldwin, but someone in his operation dropped the ball big time.

Wolfe: I want to say Front Row should make a leap toward competitiveness with Chris Buescher and the alliance with Roush Fenway. But given how bad Roush cars were last year, that improvement is no given.  So I want to say it but can’t. Agree, too, that the way Baldwin handled Bowman’s exit was bush league.

Phil Allaway, Senior Editor: My best guess that is Front Row Motorsports is in the best position to improve.  It’s not even so much that it now has Landon Cassill, a very underrated driver that has spent his time in Sprint Cup toiling away with small organization.  The alliance with Roush Fenway Racing is going to pay dividends very quickly.  Chris Buescher is a strong driver in his own right, but that extra information is the huge win here for FRM.  It will take them to the point where it could legitimately challenge for the odd non-restrictor plate top 10 every now and then.

NASCAR also announced changes for the XFINITY Series, which include a Chase format (which will also be in use in Trucks) and heat races to set the starting lineups in the four Dash 4 Cash races (Bristol, Richmond, Dover and Indianapolis). Will these additions make the racing more exciting for fans?

Allaway: The format for the four races with heat races is incredibly convoluted, and I legitimately do not understand it at all.  All I know is that the race is going to end up shorter because of it and I cannot co-sign that.  The Chase will add absolutely nothing to the XFINITY Series; it’ll just end the same way it already does.  Booting Cup drivers from the Homestead finale is an interesting notion, but why not all the Chase races at minimum?    The changes aren’t going to make the racing more exciting — they’re gimmicks.

Caldwell: I think heat races are always fun. I have been a naysayer in shortening races, and that’s basically what the heat races for the Dash 4 Cash events are doing, but I’m excited to see how it plays out. It’s a lot like what we’ve seen in Eldora for the Truck Series race, and that has proved to have some exciting racing. As far as the Chase goes, I wish they would somehow figure out a way to lessen the amount of Cup drivers in the races. I think it would make it more legit as far as crowning the champion. This format can very well produce a champion that does not have a win, and then you have to wonder if it’s awarding mediocrity.

Fesko: The Chase will be exciting for those fans that love the format and boycotted by those that hate it. The heat races are where the real intrigue occurs. Breaking up the show into segments with the highest-finishing NXS regulars competing for the Dash 4 Cash is a brilliant move and gives the NXS that little something extra that has been missing in its quest to differentiate itself from Cup.

Howell: Like it or not, the Chase format has added drama and tension to late-season competition. Seeing it adapted to the NCWTS and the XFINITY Series will certainly up the ante for teams in those divisions. I admit I like the non-Cup clause that’s been added to the rules — anything to keep the competition more balanced is a good idea. As long as the focus is on winning races, it might prove beneficial. As for running heat races:  YES! I’m a huge fan of this development. Heat races are what make local racing so exciting. I’m all for adding more racing as an attempt to add excitement.

And now for something a little different: Which two drivers from different eras and/or series in NASCAR would you like most to see race each other, and why?

Fesko: A cop-out answer would be Richard Petty in his prime and Jimmie Johnson, just to see who would come out on top, but the better choice would be Petty and Richie Evans, the nine-time Modified champion who was nearing 500 career wins before his fatal crash in 1985. Imagine these winningest drivers going head-to-head in an IROC-type car.

Henderson: There are so many pairs you could put in this category!  I’m going to go with Jimmie Johnson and Dale Earnhardt, though, because at the end of the day, they’re so similar in their tenaciousness and single-minded desire to win, and both are and were bulldogs when they smelled the lead, though their driving styles are vastly different.  I think the level of respect would have been very high between the pair. Honorable mention here to another pair of strikingly similar drivers: Tony Stewart and AJ Foyt.

Howell:  I wish Curtis Turner and Tim Richmond could have raced at the same time in NASCAR. Their on-track talent would have made for some wild races, and their off-track personas would have added some much-needed flair to the Cup Series. Nothing about these two could have been called vanilla. I’d love to see Pops go wheel-to-wheel with Richmond.

Wolfe: I would love to see Matt Kenseth and Dale Earnhardt go at it now and turn it into  an I’m-getting-the-last-hit-in battle.

Allaway: I’d like to see Dale Earnhardt, Jr. take on an in his prime Bobby Allison in the 1970s.  Earnhardt always talks about how the 1970s are his favorite era of NASCAR racing.  Well, it would be put up or shut up time.  Could Earnhardt modify his modern techniques to handle an old-school Chevrolet Laguna?  I have no doubt that Allison would give Earnhardt everything that he could possibly want and more.

Caldwell: I think Dale Earnhardt and Kyle Busch would put on a great show racing each other. Both drivers were extremely aggressive and would do almost anything to win a race. There is no doubt both of them could wheel a racecar and you’d have to wonder how many times they would be leaning on each other at the end of a race and how many disagreements the two would have over racing space. I think it’d be great to watch.

The Frontstretch Staff is made up of a group of talented men and women spread out all over the United States and Canada. Residing in 15 states throughout the country, plus Ontario, and widely ranging in age, the staff showcases a wide variety of diverse opinions that will keep you coming back for more week in and week out.
@Frontstretch
Previous Joe Gibbs Racing Prepping for the Future with Erik Jones, Daniel Suarez
Next Jan Magnussen Fastest Overall in Wet Night Practice