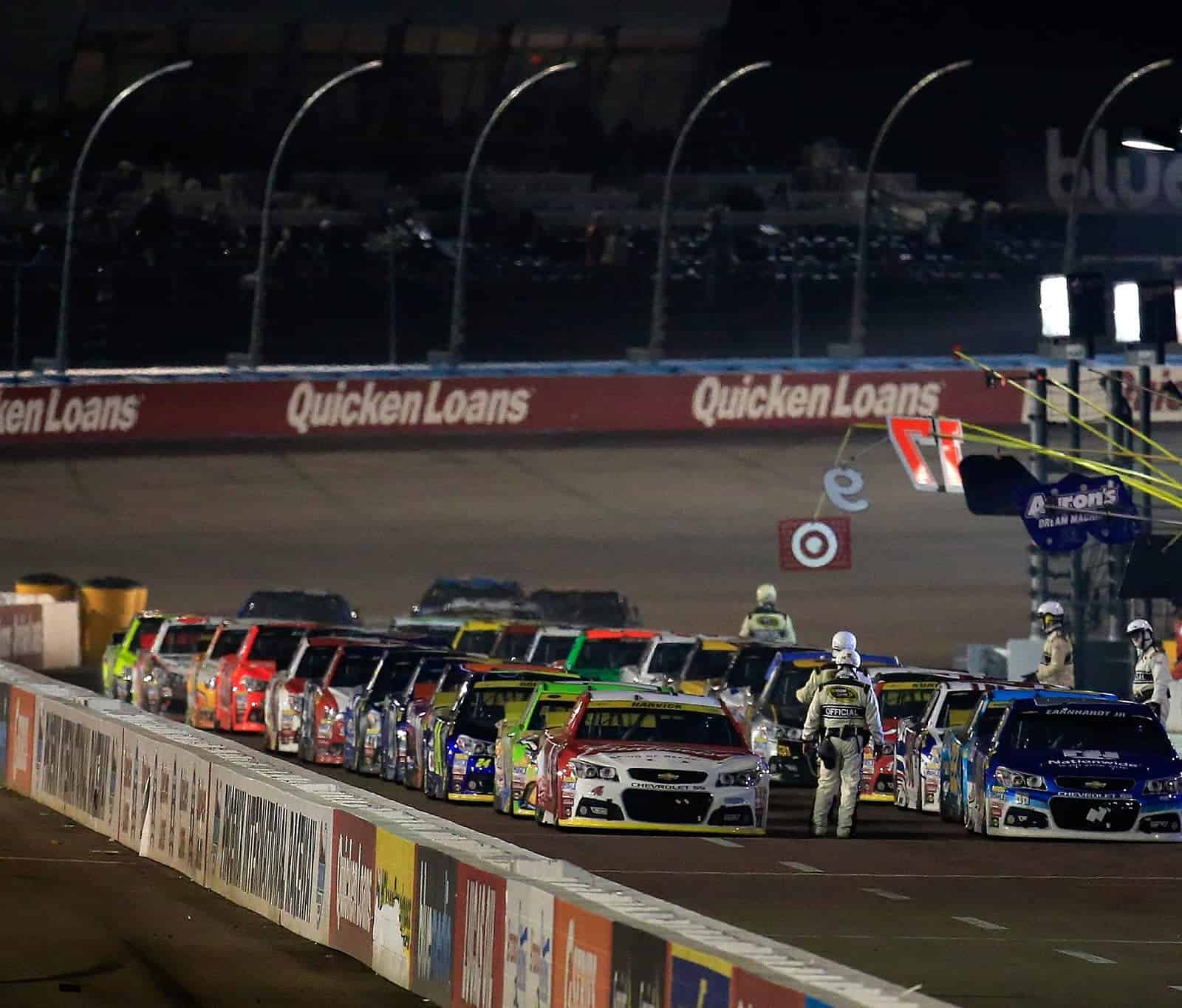 1. It will make very little difference to the racing you see.

While the Sprint Cup field will now be comprised of 40 cars instead of 43, thanks to the charter announcement, the impact on the actual racing will be minimal, at least in the short term.  Fans won’t see a different product on the track because of the charters, at least not for the first few years.  The impact is going to be seen later on in the nine-year deal, when increased revenue for the teams involved, which will come from the season point fund and other programs, allows more teams to be competitive.  But will fans see any real difference in 2016?  Unless they were watching the backmarkers most weekends, no, they won’t.

2. It is designed to help smaller teams, not hurt them.

Social media have been lit up with fan complaints about how the charter system will harm the smaller teams and drive them from the series.  That could not be further from the truth; in fact, the opposite is true.  The charter system helps those teams in three key ways: It gives them additional revenue, though admittedly less of it than the bigger teams will get, at least on the point fund end, it gives them increased value for sponsors through guaranteed starting spots, and it allows them to put more focus on their race packages rather than on simply trying to make races. Leasing their charter for a year may bring a team much-needed funds as well.

It’s been reported that Premium Motorsports will lease its charter to HScott Motorsports and the No. 46 for $1.6 million.  That pays for a lot of parts and pieces to help the team improve. Charters are not going to take a 30th-place team and make it a winner overnight, but the system can help it become more competitive over time, which in turn makes it even more appealing to sponsors.  It creates a cycle of success rather than those teams spinning their wheels just trying to survive.

3. It will probably limit new teams entering the sport.

That’s another reason fans are using to decry the new system, and in the end, it’s probably true, at least when you’re looking at growing the field past 40 teams every week.  Anybody who’s read my columns knows I oppose change for the sake of change and I respect the sport’s history immensely.  And small teams being able to come in and make it big is a part of that history.  It will be sad to see it become a thing of the past.

But it’s not going to hurt anything in the long run.  How many teams have come into the sport in recent years and been truly competitive?  For every Furniture Row Racing there are probably 10 Swan Racing teams who try and fail to be competitive.  Remember, Furniture Row took a decade to make elite status, and whether the team can stay there still remains to be seen.  It’s better for the sport if the small teams who are already there can gain a foothold and become more competitive; that’s what will eventually make a difference in the on-track action fans see.

And starting a new team is hardly the only way to be involved; an ambitious newcomer can buy an existing team or buy into one on a level that can, make a real difference to that team.  The XFINITY and Truck series will still offer opportunities for team ownership, and in reality, a new owner is better off in those series if they don’t have experience in racing at that level.

As much as I hate comparisons with stick-and-ball sports, this instance is one where it’s actually applicable.  Does Major League Baseball (or the NBA, NFL or NHL) suffer because there aren’t new, and generally weak, teams joining the league at will?  No.  And neither will NASCAR when all is said and done.

The offseason mergers and consolidations were no accident.  Teams knew the charter system was coming, and they adapted.  BK Racing dropped one team and snapped up race cars from Michael Waltrip Racing, Tommy Baldwin Racing forged an alliance with Richard Childress Racing, Front Row Motorsports dropped one of its three teams which did not run full time in 2013 and 2014, and Hillman Racing and Premium Motorsports and Circle Sport and Leavine Family Racing created mergers.  Those moves drop the field to 38 full-time teams, ensuring that a team running the full year will rarely be in any danger of going home early.  The alliances, mergers and consolidations are likely to make those teams stronger than they were before, and that means more competitive on the track, which equals increased racing action for fans.  The vast majority of teams have spoken in favor of the system.

I’ll say it one more time: When the dust clears, if it helps teams become more competitive, that’s a good thing for fans because the on-track product will be better.

There’s been talk of franchising in some form for many years in NASCAR, and teams have been, by and large, supportive if it if not outright asking for it.  When the sport was thriving and 50 cars were showing up for 43 spots in the field, there was no reason for NASCAR to do anything that redistributed the wealth.  But those days are gone, and the sport needed to ensure a strong foundation for the future.

Is it perfect?  No.  There should have been something closer to true revenue sharing between the haves and have nots.  This would produce cycles of success for teams similar to what’s commonly seen in other sports: a team rises to the top and dominates for a few years before falling behind someone else and heading into a rebuilding period.  In NASCAR, where a few organizations are perpetually a step above, fans complain about the lack of change at the top.  But without a better distribution of wealth, it won’t change anytime soon.

I’d have also liked to have seen charters awarded slightly differently to start, based on actual longevity in the sport and limited to three per organization, period.  That small change would initially have affected just two teams: Wood Brothers Racing, which would have received a charter, and Hendrick Motorsports, which would have had to choose a team not to have one.  It would also have disallowed the sale of charters to fourth teams for Joe Gibbs Racing and Stewart-Haas Racing and ensured one for the No. 46 team at HScott Motorsports. As an alternative, I’d support just giving out 40 charters, closing the books for the time being, and going racing with the teams already here.

Amid the other moves fans have seen and will see this season, this one actually affects them the least.  It won’t change what you see on the racetrack.  It won’t drive the small teams out of the sport.  It’s not going to keep a talented driver out of a ride any more than the dearth of top rides always has.  In short, it’s the biggest deal of the year, but for all it affects the racing, you’ll forget it even exists by mid-season.

It’s the same drivers in the same bumper cars with the same drivers being shown every “race”. Once again, thank you Brian. You’ve done so much to help the stakeholders in NA$CAR, just like Jimmy Spencer said years ago. At least now you’ve admitted it.

More than anything, I don’t like how this affects the Wood Brothers. That is not the right way to treat a team that’s been around longer than most of today’s owners and drivers have been alive.

From hearing owners like Tommy Baldwin speak, this will really be a boost to mid and lower level owners. They now know they are guaranteed in the field all season, will get a guaranteed amount of purse money and can market that to potential sponsors. I feel bad the Woods didn’t get a Charter, but they haven’t run full time since 2008. I think Roger Penske and Ford will make sure things work out for them though. This system was inevitable. In the long run I think it will encourage new owners to get involved. If a new manufacturer or big time owner wants to start a team, they can buy charters and be guaranteed starting spots. I remember when Toyota came in 2007, and struggled to make races.

Please read my comments in Amy’s other post. Thanks
And now this one
#1. If it doesn’t do anything then why do it?
#2. One small team leasing a charter is going to help the other small teams HOW?
#3. I totally agree with 90% of that. But please do not compare WRASCAR to major league sports as it is no longer a sport, it is a “show”.
#4. Big words in the last sentence of this one, “if it helps”.
#5. Just because it’s “been around a long time”, doesn’t mean it should be done.Bad ideas have been around a long time. And “redistribution of wealth”, I won’t even go there!