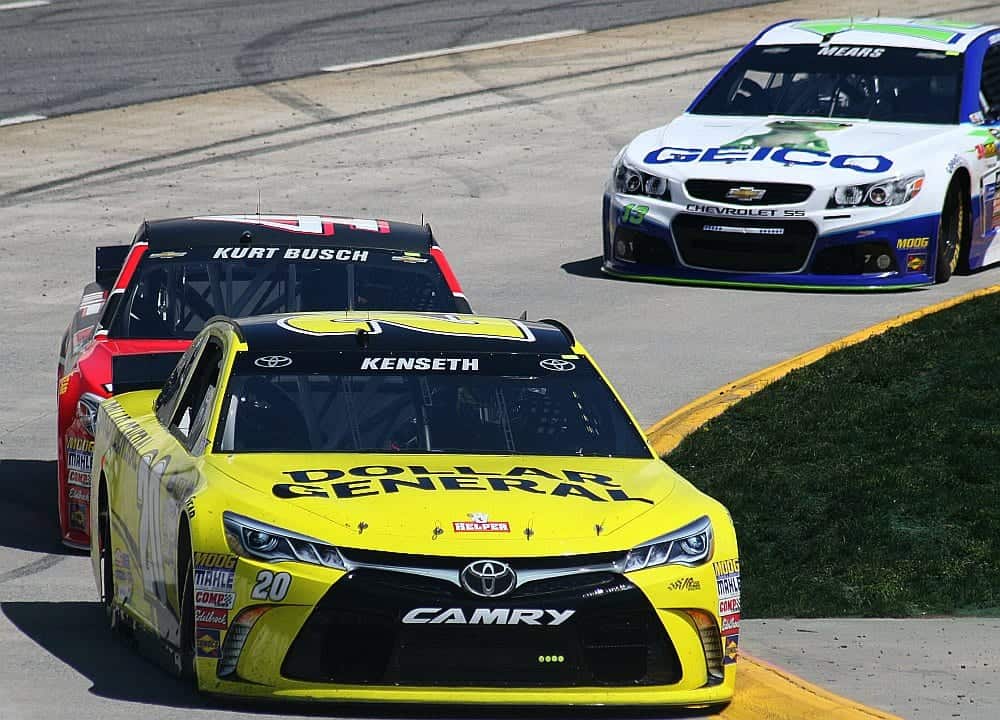 With the changes NASCAR made for 2016, including a new aerodynamic package and charter system, can fans expect better racing?

Vito Pugliese, Senior Writer: The Charter System won’t have much of an impact on racing in the short-term; save for freeing up a few pit stalls and space in the garage area. The Aerodynamic package should provide some better racing; mainly because just about anything would be an improvement over what fans sat through for the most part last season. It will be better, but not where it could be until they do away with the don’t-call-it-a-restrictor-plate tapered spacer.

Zach Catanzareti: Contributor: It’s a safe bet the 2016 season will be even better than last year. Change always bring more difficulty to the teams and drivers, which usually makes it more fun for us. This aero package is just what the drivers want and after two tries on different tracks in 2015, the cautions were up and the whole race seemed to keep a certain level of excitement.  I do believe the charter system will have almost zero impact on the racing at least in the short run so I think the aero package and the new class of drivers will make a whole new set of storylines spark aflame.

Jerry Jordan, Contributor: I think NASCAR is trying to do everything it can, to not only improve racing, but to give fans an overall better experience at the racetrack. The new aero package is just a part of it and it should make things more interesting as the drivers learn how to maneuver the cars on the track. That being said, I think you will see a shift as some drivers will adapt quicker than others. As for the new charter system, it is a way to bring NASCAR into a realm that lets the owners actually operate viable race operations. Think back to Roush Racing, which had to bring in an investor from Fenway Partners, to keep the doors open. The same holds true with Richard Petty Motorsports and several other operations. Penske and Hendrick used money from their other companies to stabilize teams from time to time. This model gives owners a chance to build an asset.

Sean Fesko, Contributor: Yes. The new aerodynamic package produced some great racing in 2015 when tested at Kentucky and Darlington, and fans can expect the increased competition at each of the intermediate races this season. As for the charter system, I think it’ll be a couple of years before fans really see benefits as the system needs to prove itself to potential sponsors.

Phil Allaway, Newsletter Editor: The aerodynamic package that debuts at Atlanta should make for better racing.  I’m really looking forward to that race.  Atlanta races are already pretty competitive, but it says something that NASCAR’s already allotted teams 13 sets of tires for the race there.  The charter system completely grinds my gears.  I’d definitely be less angry if they didn’t cut the size of the field as part of this system.  It was a completely unnecessary move that does nothing but put good people out on the street

A few Cup teams seemed on the verge of something more in 2015–who can expect a breakout season in 2016?

Catanzareti: I’ll have to go with the other three JGR boys who didn’t even see the Final 4 last year. Kenseth may have a different mindset into ’16, but boy was he on it last year.

Mark Howell, Senior Writer: Kyle Larson, to me, seems poised on the brink of a breakthrough season. He’s been gaining valuable experience and that will only mesh neatly with his natural driving talent. Combine that with a successful car owner and some enthusiastic sponsors, and Larson might be looking at the year of his career thus far.

Jeff Wolfe, Senior Writer: After an OK rookie season and a disappointing second season, this is a big year for Austin Dillon. The rule change may help him as we’ve seen how good he can be on the dirt tracks, which requires a driver to feel what the car needs. This season may well define if Dillon is going to be another also-ran who occasionally contends, or a real contender in the years to come and I think he will respond with a much better 2016.

Amy Henderson, Senior Editor: How about Tommy Baldwin Racing?  They secured the best sponsorship they’ve had in years, a veteran driver, a technical alliance with Richard Childress Racing, and a charter in the off-season.  Expect a noticeable impact on the track.  I like the new-look Front Row Motorsports as well—Landon Cassill and Chris Buescher should help that team step up its game.  One of the biggest mistakes a team has made recently was Hendrick Motorsports taking Kasey Kahne’s star power over Cassill’s talent, and fans will see why as Cassill climbs the ladder.

Aaron Bearden, Assistant Editor: I’m going to take a page out of everyone’s 2015 prediction and say Kyle Larson and Chip Ganassi Racing. Everything’s lining up to make this a special season for the young dirt-track star. Ganassi gained a major financial backer over the offseason in Rob Kauffman, NASCAR switched things over to a more driver-controlled rules package, which favored Larson in 2014, and, quite frankly, Larson feels that he has something to prove in his third year. Don’t be surprised if Larson, and perhaps even teammate Jamie McMurray make it to victory lane once or more before the Chase.

Matt McLaughlin, Senior Writer: It’s been awhile since a rookie really stirred the pot, but perhaps Chase Elliott will do so given the equipment he’ll be in. And it’s up to Ryan Newman to keep enough purse money flowing in to fund Pop Pop’s toy shop.

With a lot of talented youngsters waiting to pounce on rides, which drivers need to pick it up in 2016 or be in danger of getting sent packing?

Howell: If I were Ricky Stenhouse, Jr. and Trevor Bayne, I’d be watching for the young drivers who suddenly seem to be hanging out around the hauler this season. These two seem like drivers poised on the verge of being SOL (Suddenly Out of Luck). If these drivers don’t turn things around soon, they’ll likely be looking for work with other teams. Given the current state of racing at Roush Fenway, however, that may not be too bad a deal.

Bearden: Speaking of Larson… This could be a make-or-break season for the young talent. However, if the seat’s hot for him, it’s burning for the Roush Fenway Racing duo of Trevor Bayne and Ricky Stenhouse, Jr.

McLaughlin: Kasey Kahne and Greg Biffle come readily to mind. No one at Roush Racing should sleep easy at night. And it’s about time to admit that the Danica experiment has been a one trick pony freak show since the start.

Pugliese: Biffle is probably safe only because Roush Fenway needs something in the way of stability after losing the faces of the organization. I would say Denny Hamlin needs to do something remarkable this year. It’s hard to believe that he’s been in the No. 11 for 10 years now, but there is Kyle Busch-level talent in Erik Jones that is waiting in the wings.

Jordan: The guy who needs to improve the most is Trevor Bayne but you can’t leave Ricky Stenhouse Jr. out of the mix, either. They both need to perform because Ford Performance isn’t putting a crap ton of money into the Roush Fenway Program without expecting some return on investment. Looking at other drivers, I think Kasey Kahne needs to pick up the pace. He isn’t a bad driver and he has shown he can win. He just needs to put a consistent run together over several races.

Millenials do not have a love affair with cars as the generations before them. How can NASCAR bring them into the sport?

Henderson: Here’s the thing about sports, NASCAR included: most fans don’t become fans because they just sat down and started watching.  They became fans because someone they knew, and usually someone they looked up to, are fans and they show them the ropes by taking them to events, watching with them on TV, nurturing their interest.  If NASCAR wants to bring new fans into the fold, it all starts with making the old ones passionate again.  Unfortunately, NASCAR doesn’t seem to understand that the next generation will come to the sport through the ones before, and prefers to try gimmicks and social media experiments in place of a much simpler solution.

Bearden: NASCAR’s done well to try to grab young fans online with social media interaction, and the current playoff format has made the points system simpler to understand. The big keys for the series moving forward are to continue to make races easy to follow on cell phones and social media, work on amenities like Wi-Fi and driver interaction at the track, and try to advertise more based off of the experience at the race track. Most people are sold once they attend their first race. The trick is getting them to one.

Pugliese: Partner with Fan Duel and Draft Kings, and push the Fantasy angle. If there’s money involved and guys can gamble on something exciting, it’ll find an audience. Football is falling out of favor with many parents and children, but everybody loves those two legalized gambling sites. Except New Jersey.

Fesko: Believe it or not, NASCAR is trying to bring them in already with gimmicks like the Chase, caution clocks, etc. The problem lies in the question: millennials just aren’t into cars like their parents and grandparents. No matter what NASCAR does, it isn’t going to cater to them unless they do something even more drastic like the electric car concept Bill Nye suggested.

Wolfe: What NASCAR needs to do is sell the people, not the cars. The cars on the racetrack basically look the same to the casual observer. They are not going to be able to tell the difference between a Ford, Toyota or Chevy just by watching them on TV. What can be interesting is telling the stories of drivers, crew members, etc., on how they got there, what their struggles have been, and how they are overcoming or have overcome those struggles. That’s something everyone can relate too because everybody struggles with something. It’s the people, man.

Allaway: I’d argue first that this is not necessarily a true statement.  It is driven by somewhat sensational articles that ran last year in publications.  While yes, some people are holding off on getting their licenses (which is a completely stupid move that creates nothing but problems for you long-term), there is still quite a robust number of younger people whose lives completely revolve around cars.  NASCAR needs to market to those people who like speed.