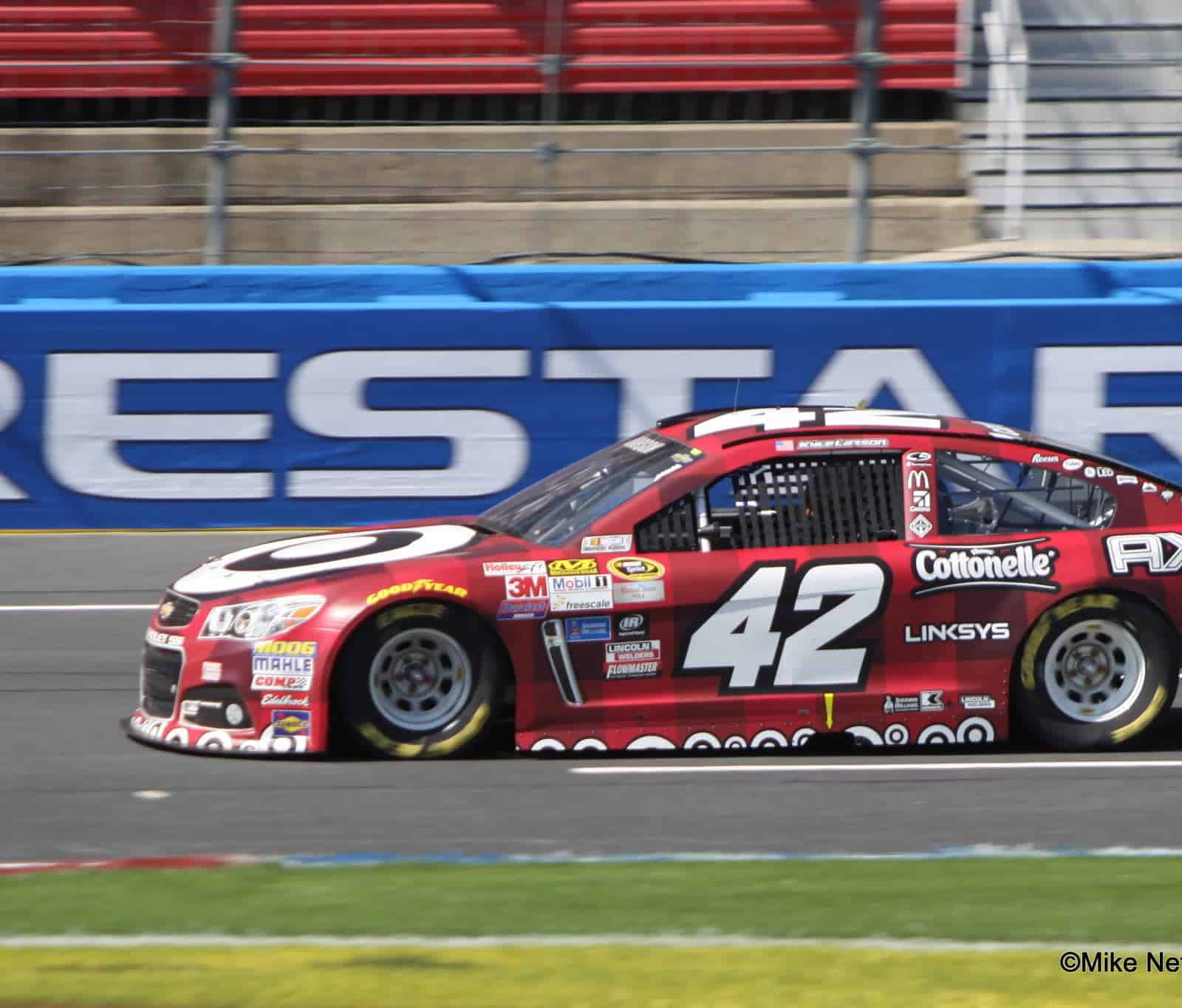 Your 30s are an interesting time. Marriage, kids, and moving up in the working world all put increasing demands on the need to become an adult but there’s also a yearning to stay young. Suddenly, you want that guy at the bar to check your ID and think it’s fake. Those Saturday nights your group of friends actually can meet out, that increasingly rare occurrence turns into a trip down memory lane. You want to think you can drink like you did in college, stay out until 2 a.m. and bring the house down. But you know what happens instead? You’re home by 10:30, the pizza you had gives you acid reflux and the sound of the baby wakes you up at 4:30 a.m. Try as we might, you see Father Time comes for everyone, taking us to the next stage in life regardless of whether we’re ready.

It’s that philosophy of change, present within my own life that I feel envelops NASCAR this February as we head toward the 2016 season, also known as year 13 A.C. (After Chase). The sport is rolling out different rules, debuting a charter system designed to give owners leverage and expanding its playoff format to the XFINITY and Camping World Series. Yet the biggest shift ahead doesn’t involve what we’ve just seen on paper.

It’s all about the drivers running up front.

Sunday’s Daytona 500 will be the first without Jeff Gordon since 1992. We were reminded of that swiftly when young Chase Elliott took the pole Sunday, at age 20 Gordon’s replacement in a No. 24 car that made the Chase Final Four last year. Elliott, not even a thought in anyone’s mind back in ’92 when father Bill sat on the pole for the Great American Race has raised expectations already he’ll be a weekly contender. It’s a kick in the ass to an entire generation of fans that have never seen a NASCAR career like Gordon’s go from beginning to end.

Instead, it’s now Chase chasing “the Chase,” joining a crew of solid twentysomething drivers competing for Rookie of the Year in top equipment. Ryan Blaney, running for the Wood Brothers will have to qualify the No. 21 on speed every week but benefits from Team Penske support. Ford has high hopes for XFINITY Series champion Chris Buescher as he steps into the No. 34 at Front Row Motorsports. It’s a movie that’s in some ways a sequel; just a few years back, eight drivers ran for Rookie of the Year honors as drivers like Kyle Larson, Austin Dillon, and Cole Whitt were supposed to signal a changing of the guard.

Up until now, it hasn’t happened; just one driver under 30 made the 16-driver playoffs last year (Joey Logano). But the cadre of veterans that have dominated the postseason in recent years can only hold off Father Time for so long. Gordon was just age 44 when he retired last year; Tony Stewart, who starts his final season on the sidelines with an injury will be 45 when he hangs it up November. Many of the other big names NASCAR has relied on, both during its period of growth and subsequent decline are approaching that same tipping point. Hendrick Motorsports teammates Jimmie Johnson and Dale Earnhardt, Jr.? They’ll be 41 and 42, respectively this season. Inaugural “Final Four” champion Kevin Harvick? He turned 40 in December. Recent title contender Matt Kenseth is age 44; best buddy Greg Biffle is 46 and struggled to scrounge up primary sponsorship to be competitive in 2016. Suddenly, NASCAR’s best appear closer to earning a rocking chair than another championship trophy.

Certainly, like in all sports they won’t stay on top forever. The Changing of the Guard will be quick and it will be substantial; I’m reminded of 2005, the year Rusty Wallace retired, Sterling Marlin lost his top-tier ride with Chip Ganassi, Mark Martin began the first of his “I’m thinking of leaving” tours and Terry Labonte scaled back to part-time competition. In their wake came Carl Edwards, third in points during his first full season while Kyle Busch won Rookie of the Year and Denny Hamlin made his debut with Joe Gibbs Racing. All of a sudden, dominoes were falling everywhere and it seemed like half the rides in the Cup Series were changing hands the next year or two.

We are poised for the same to happen again. Conventional wisdom would point to Larson having a breakout year in his third full-time season. Elliott and Blaney will be given every chance to succeed while Logano, winning more races the last two years than any other Cup driver is realizing his full potential. Young Erik Jones is set for a part-time schedule later this year and Ty Dillon will be replacing Stewart in top-tier equipment at Stewart-Haas Racing.

Can these new names bring in a new generation of fans? That’s the big question in the wake of NASCAR’s fight for relevance as there’s no doubt the loss of both Gordon and Stewart, longtime familiar faces leave the sport shifting gears. Logano has failed to catch on in quite the same way and there’s a void just waiting to be filled. Empty seats will be changed not just through a rules package but by engaging personalities; NASCAR was built on emotion and rivalries as much as the cars themselves.

Such a seismic shift could also apply to ownership. The new charter system, on the surface doesn’t change much other than guaranteeing money to a potential seller. Well, the reality there is we could see a number of  charter sales within the first few years. Jack Roush is going to be 74 years young; Joe Gibbs is 75 and Roger Penske is 78. Those three alone control at least a quarter of the “automatic berths” NASCAR just handed out for all 36 events and we haven’t even gotten to Richard Childress and Rick Hendrick, both of whom are over age 65. Clearly, the power structure is in need of some young blood and while Stewart is ready to transition into team ownership at age 45 there have to be others out there willing to step up and enter the arena of Cup Series competition.

Could this agreement, designed to give parity throughout the 40-car field provide the leverage for younger, smaller owners such as Tommy Baldwin to get competitive? Can it establish a value lucrative enough for younger entrepreneurs to try their hand at the sport? And during the process, can NASCAR actually establish limits on team ownership and collaboration so it doesn’t feel like the entire starting grid is getting provided by Ford, Chevy, and Toyota’s “A” team? Financially that’s a huge question as it’s the same people, time and again sitting on top of NASCAR’s throne. Try as they might, the likes of Hendrick and Gibbs can’t live forever and at some point they’ll need to transition their dynasties or have them broken apart as the sport enters its next phase of competition.

How these issues play out is yet to be determined. But as a new year dawns at Daytona, for me it’s no longer a question of if the shift will come. It’s a question of when.

After all, the only person who’s never lost a race is Father Time.

You’re right, there are a lot of changes going on in NASCAR and the big question is are the fans interested? I can only speak for myself and that is the stuff that went on in the off season and Chase Elliott winning the pole for the 500 didn’t change my point of view. I’ll be a casual fan and see if NASCAR’s racing improves enough to be worth my time.

Question is are more “people” interested? “Fans” of course are, by definition, always interested. The first race at Daytona won’t be a fair test because there isn’t much else going on, and its been a couple of months since the last race.
My prediction is that the number of butts in the seats is about the same, but we will be inundated with news of how much growth there has been online and in social media.

good point, Russ, and you are right, speedweeks and the 500 are always anomalies in the season.

Nascar qill have to improve greatly for me to maintain much interest. There are lots of other activities happening Sunday afternoon and if nascar does not improve, they will have lost me again.