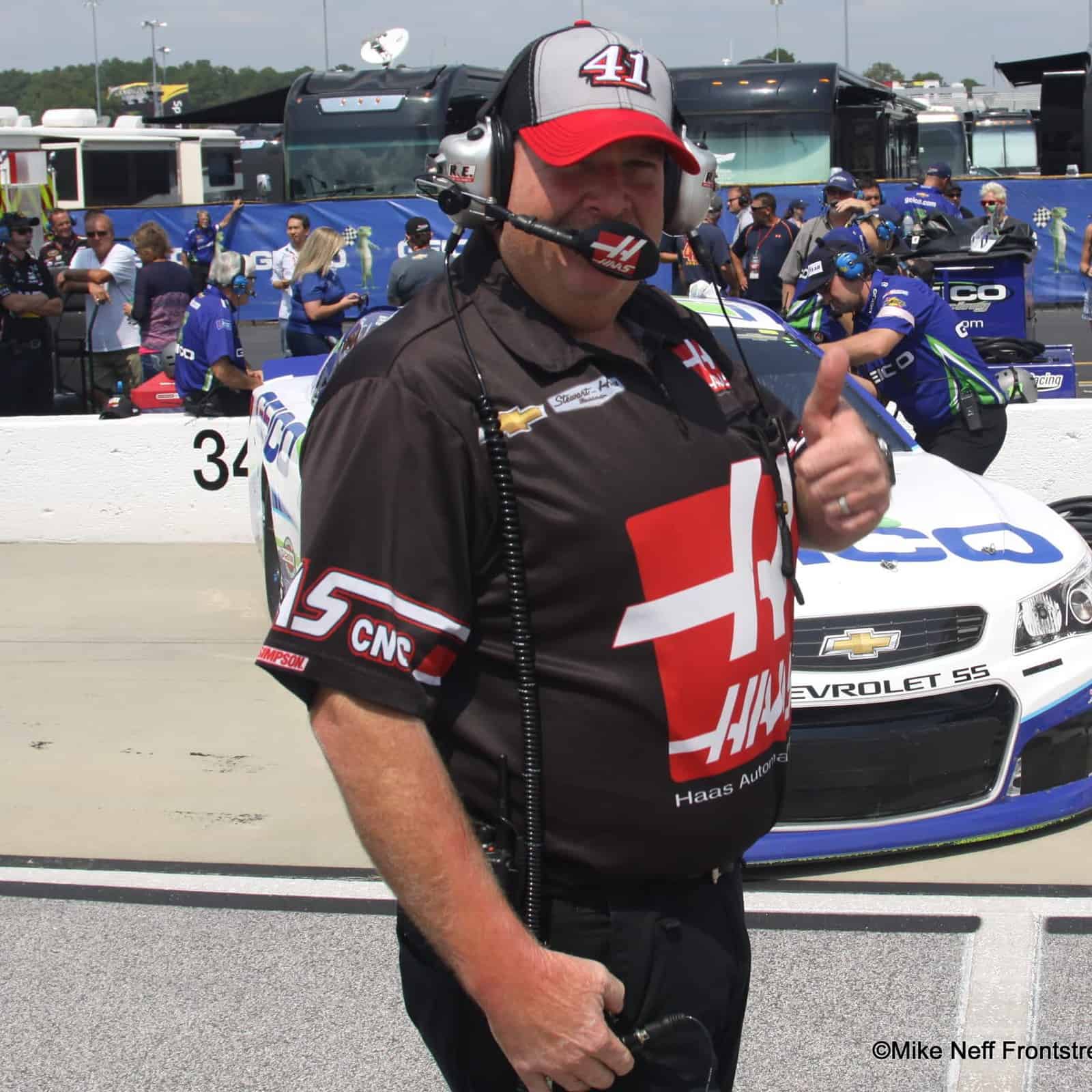 The offseason is over, what little there is, and NASCAR is back at it hot and heavy in Daytona. Throughout Speedweeks, teams have no less than eight practice sessions in addition to qualifying and the Duel events. Preparing for the biggest race of the season to start the year is a pressure-packed effort and unforeseen events can make it even more challenging.

Kurt Busch’s crew chief, Tony Gibson, enjoyed a brief time with his family over Thanksgiving and December but was wide open as soon as the new year began. The end of his week was intense as well thanks to the end-of-Duel incident that damaged the body of Busch’s No. 41 Chevrolet. His team was in the garage until midnight on Thursday and was back at it 7:00 AM Friday. It’s a grind, to be sure but he finally had some time Saturday morning to sit down with Frontstretch for the first issue of 2016’s Tech Talk to set up Sunday’s Daytona 500.

Mike Neff, Frontstretch.com: You look great. Have you been working on slimming down and getting more fit?

Tony Gibson: Yes, I’m doing good. I started at the second Pocono race last year losing weight. I’m down about 36 pounds right now. I’m doing pretty good on it, I have about 15 more that I want to lose. I will work really hard in the Spring and Summer with a lot more outside activities at night when it isn’t dark when I get home. I can do a lot more walking and riding bikes and stuff like that. It has been fun.

Neff: You’ve already been wide open at the track this week thanks to circumstances. It has most likely been that way for most of the offseason as well. Did you have any opportunity to decompress and do some family stuff between Homestead and Daytona?

Gibson: My daughter graduated from Appalachian State the second week in December. We took our side-by-sides for the whole week of Thanksgiving for vacation. When we came back from that we went straight into getting prepared for the whole family coming up for the graduation. We did that and then it was Christmas and then New Year’s. After that, we had to thrash to get a car ready for the tire test in Las Vegas on the 12th of January. The offseason was short; it was pretty much the month of December. There was so much going on that I pretty much don’t remember much of it. Our downtime is so small anyway that we don’t really have any. You try to absorb it and take advantage of it while we can get it. The next thing you know, we’re right back at it.

Neff: We’re here at Daytona with a package that we have had for four years now. Do you feel like we need to change it up? Do you think everyone has figured it out to the point that they are all so equal on the track?

Gibson: I’d like to see them do something different and I believe NASCAR is looking to do some things differently. I think the reason they didn’t do it this year was because the Charter system was coming in and some other rule changes were coming down. We had enough stuff going on so they didn’t want to address speedway stuff. It is what it is and it does pretty good. I think they are definitely looking at changing some things around though, maybe looking at putting things more where we are on the mile-and-a-half package with the low center of gravity stuff. They’re looking at it and working on it with the teams. I hope they do something different.

Neff: We’ve debuted the digital dashboard now. Different teams are handling it differently. What is your approach?

Gibson: I was a huge fan of it from the start. We were the first ones to race it, at Darlington last year. It went really well. We spent a lot of time before we raced it developing it with Kurt, getting things laid out and working out the bugs. We were huge fans of it coming in. I like it. I feel like it brings our cars closer to what people drive on the street. Most cars today, when you turn the key on, they light up and everything is digital. I think it is cool that NASCAR is trending that way, just like the fuel injection stuff. That is the kind of thing we have to do to correlate the race cars to the street cars.

Neff: Trent Owens the other day said there are 16 different pages that can be programmed into the digital dash. Knowing these drivers, that is probably 14 too many. How many different configurations are you using on your dash for Kurt on a given weekend?

Gibson: We only use two of them. We use one for qualifying and another for the race. Some of the stuff is mainly just layouts and different things that the driver wants to see. Kurt is pretty narrow on what he wants to see on the dash. We don’t use a whole lot. We use a different layout for qualifying than we do for the race. It just shows RPMs and a couple of other things that we use. For us, it is fairly simple.

Neff: We saw a couple of guys pick up trash during the Duels the other night. You’re trying to run the smallest opening possible because very bit you open up costs you downforce and air flow. With the changes to the radiator pans going forward this year are the openings going to be a greater challenge for cooling the cars or is the radiator going to be able to handle it as it had in the past?

Gibson: The radiator is pretty much the same as before. The spec radiator that NASCAR is coming out with will be as efficient as what we have now. The biggest thing with the paper on the grill is that you’ll see different cars that will hold it longer. The Fords have a new body and the nose structure seems to lend itself to holding onto the trash more. Last year, they had a serrated grill that shook it off better. Looking forward to the point where we and the Toyotas get new bodies, that is something we have to look into. It is something that can hurt you more than help you sometimes.

If you’re the leader, you’re the first one to get to the trash and you don’t have anyone in front of you to help get it off. We always had those problems at Daytona and now it is worse. Now that we have it like a coliseum in here the air doesn’t get in and whip around and get that stuff moving, so it just lays there. The next thing you know, we run over it and pick it up. This is one of the worst places we see for that kind of stuff.

Gibson: It is more of a handling thing. If they handle better, there is speed there. Everyone runs pretty close to the maximum camber that NASCAR allows us to have. That is why you are noticing it more and more. It is more for handling than anything more.

Neff: It seems like cars are not yawed out, or technically yawed in, like they have been in the past. Is that a result of tighter rules to get the left-rear corner more in line or is the benefit not there?

Gibson – Yeah, NASCAR has tightened up the rule on how much toe we can run in the rear. Whenever they take a rule and tighten up tolerances you can always see that kind of stuff.

Neff: Kurt came in third in his Duel, with damage, and we’ll talk about what all you did to square it away in a minute. When you first look at the car, what are you checking to decide if you need to go to a backup?

Gibson: The biggest thing is frame damage. We got hit on the right side between the tires. Obviously, it didn’t hit any tires so that was obviously a good thing. The next thing was, did it bend the frame when it hit the frame rail? We really didn’t know that until we got it over here after the race, jacked it up and started cutting stuff off of it we realized there was no damage but sheet metal. Once we saw that, we were game on to put a new side on it. It is a really fast car. It is a good car that drives really well. We felt like we had all of our body guys down here. The guys that put the body on at the shop were down here and we carry enough stuff to put a full body on a car if we need to. Considering that we had all of the parts and pieces and the people, we said, “What the hell,” let’s just go ahead and try to fix the side of this thing because track position is huge.

Neff: Speedway cars are about nano-inches, for lack of a better term and you are hanging a body in a garage stall at the racetrack. How difficult is it to get within the tolerances and measurements that you had for the car when it rolled out of Kannapolis on the hauler?

Gibson: You can’t get it exact because we don’t have roamer arms here. We do have templates and NASCAR has their templates. We know how we fit the NASCAR templates when we got here last week with it and we’ve made some handheld templates to bring with us too. I feel like we’ve got it pretty darn close. Is it exact, no, but it is close enough to win the Daytona 500.

Neff: During the TV broadcast you were wrapping the car. Is that something that you’ve done in the past or are you just looking to expand your resume for after the end of your crew chief days?

Gibson: No, I suck at that kind of stuff. I was helping Dog and a few guys from Joe Gibbs Racing. They came up to us after the race Thursday night and told us that, if we needed help wrapping it, to give them a call. They were gracious enough to come down and help us and I was just trying to hold it for them while they did what they do. I’m not very good at that kind of stuff. A big thanks to the Gibbs guys for coming and helping us.