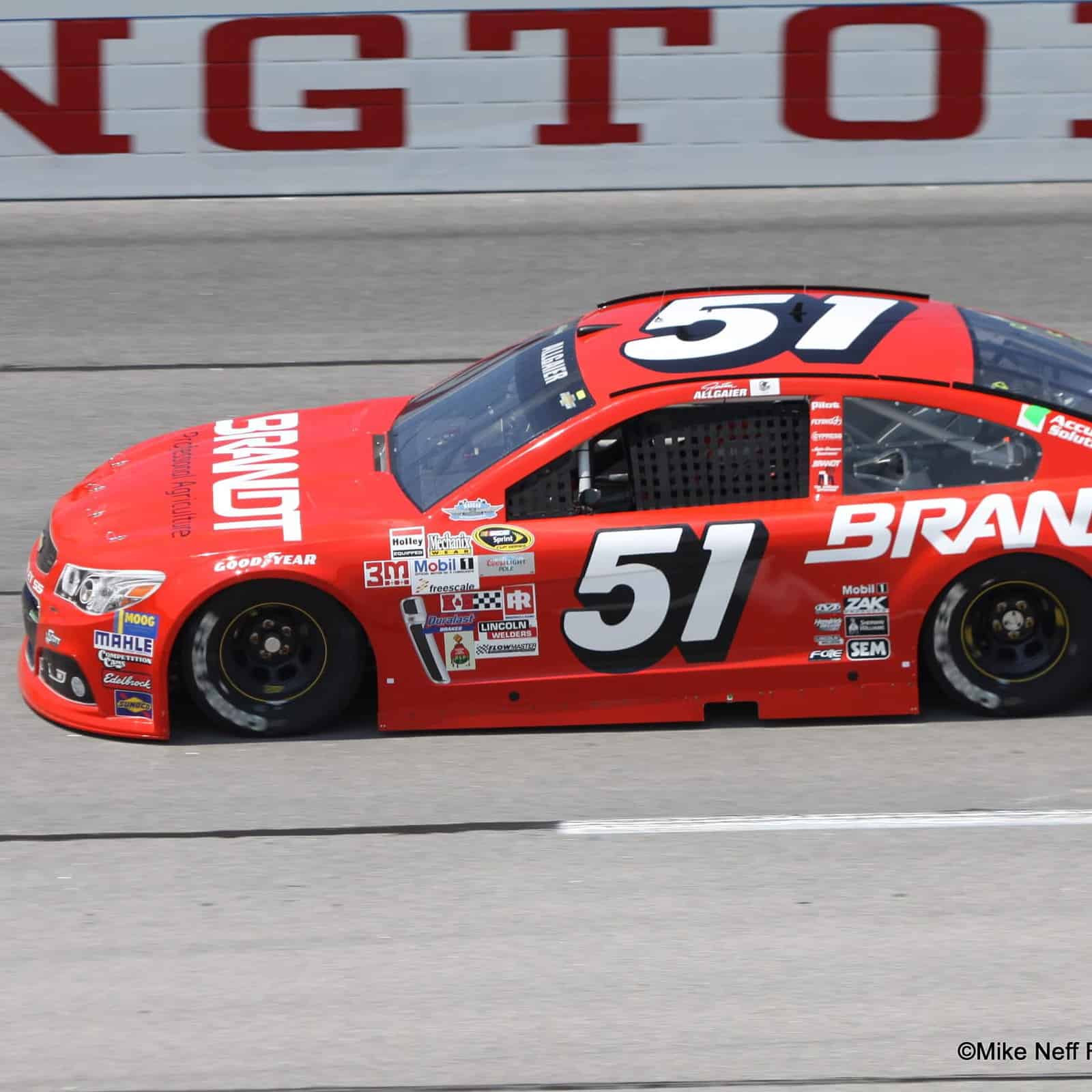 Justin Allgaier is back in familiar territory. After a two-year stint in the Sprint Cup Series, he has returned to the XFINITY Series to race for a championship. He finished 12th at Daytona in his first race with JR Motorsports, putting himself in contention for the win before a pit road speeding penalty doomed his chances at victory.

Expectations for Allgaier are high this year. He is certainly one of the favorites to make the XFINITY Chase, and has a legitimate shot at the championship with the support of JR Motorsports behind him.

While it is a shame that Allgaier’s immediate plans do not include any Sprint Cup Series appearances, he has a golden opportunity to claim the championship that eluded him during five previous years of XFINITY competition. Essentially, Allgaier has become the latest case study in a career question that several other NASCAR drivers have faced over the years: is it better to take a competitive ride in a lower series or take any open seat in Sprint Cup?

It is not unheard of for drivers to win championships after finding few desirable options in Sprint Cup. It was particularly characteristic of the Camping World Truck Series in the 2000s, when Bobby Hamilton, Ted Musgrave and Johnny Benson all won championships after long Cup Series careers. Yet all three of those drivers were aging veterans when they became champions, and none of them readily assumed that they would ever be full-time Cup drivers again. Indeed, Hamilton ran only three Cup Series races after winning his championship, while Musgrave and Benson never started another Sprint Cup event.

Allgaier, however, only turns 30 this year, and age should not prevent him from finding potential opportunities.

An example closer to Allgaier is his new JR Motorsports teammate Elliott Sadler. The Virginia native began running full-time in the XFINITY Series in 2011 after 12 seasons in Sprint Cup. He won three Cup Series races throughout his career and qualified for the inaugural Chase in 2004, but fell into a long, slow decline in performance after that. It certainly did not help that Sadler drove for Robert Yates Racing, Gillett-Evernham Motorsports and Richard Petty Motorsports while those three teams all experienced ownership changes and inner turmoil. So when Sadler joined forces with Kevin Harvick Inc., many fans assumed he would contend for championships and work his way back into the Cup Series sooner or later.

While Sadler, now 40, did contend for championships, his return to Sprint Cup does not appear to be imminent, if it happens at all. Sadler and sponsor OneMain Financial have bounced around from team to team, racing for KHI, Richard Childress Racing, Joe Gibbs Racing, Roush Fenway Racing and now JR Motorsports. He was twice been a runner-up to Ricky Stenhouse, Jr. in the championship standings and won five races since 2012. But a lack of consistent success with any one team has prevented Sadler from really being a dominant force in the XFINITY Series.

Allgaier never experienced the success that Sadler did in the Cup Series, having raced in the premier series for only two years with the young HScott Motorsports. But the biggest difference is that Sadler has raced in NASCAR for nearly 20 years, and everybody who follows the sport has a thorough understanding of what he can do behind the wheel. The same cannot be said for Allgaier, especially concerning his Sprint Cup performance.

Allgaier began his full-time XFINITY career in 2009 with Team Penske. Fresh off an ARCA championship, Allgaier was one of the few XFINITY regulars who could go toe-to-toe with Sprint Cup drivers, and some observers of the sport pegged him as a future star. However, the rise of Brad Keselowski complicated any plans to move Allgaier up to Sprint Cup, and in 2011 he joined Turner Motorsports, aligning with sponsor Brandt. Allgaier won two more races in the XFINITY Series (to go along with his first victory with Penske), and finally got to take a shot at Cup racing late in 2013 when Harry Scott, Jr., the former co-owner of Turner’s team, purchased Phoenix Racing from James Finch.

By the time Allgaier did get a chance at full-time Sprint Cup racing, talk of his future stardom had considerably quieted down. It did not help matters that Kyle Larson and Austin Dillon dominated the Rookie of the Year battle. In a season filled with growing pains for driver and team alike, he wound up 29th in points without a single top 10. He did get a top 10 at Bristol in 2015, but slipped to 30th in points. HScott Motorsports had a chance to hire Clint Bowyer for 2016, and though Allgaier out-performed teammate Michael Annett on most weeks, it was Allgaier who wound up as the odd man out.

Obviously, Allgaier did not have complete control over his departure from Sprint Cup. Yet in taking the Brandt sponsorship with him to his new team, it is reasonable to assume that he could have found another Cup Series ride, if that was what he and the sponsor desired. That brings us back to the original question: is it a better move for Allgaier to be more competitive in a lower series or take any available Sprint Cup seat?

It is important to understand that Allgaier’s situation is not like Hamilton’s, Musgrave’s, Benson’s or even Sadler’s. He is not an aging veteran who had a long Cup Series career, but he is not a newcomer in the vein of Chase Elliott.

Allgaier most closely resembles the previous driver of the No. 7 car, Regan Smith. Smith, who got shuffled out of the Cup Series at the end of the 2012 season, won six races with JR Motorsports, including his very first start. Though he never won an XFINITY championship, Smith proved that he could race competitively in NASCAR under the right situation. Uncertainty and a lack of sponsorship prompted Smith to leave JR Motorsports after 2015. The offseason was tense for Smith, he landed a full-time Cup ride with Tommy Baldwin Racing and finished an impressive eighth in the Daytona 500.

If Allgaier runs well with JR Motorsports, he could follow Smith’s path back to the Cup Series. Seeing him win races and challenge for the championship would certainly look better to team owners than finishing at the back of the pack in the big show every week. He may have taken a step down, but racing in the XFINITY Series once more should ultimately be a step up for Allgaier.