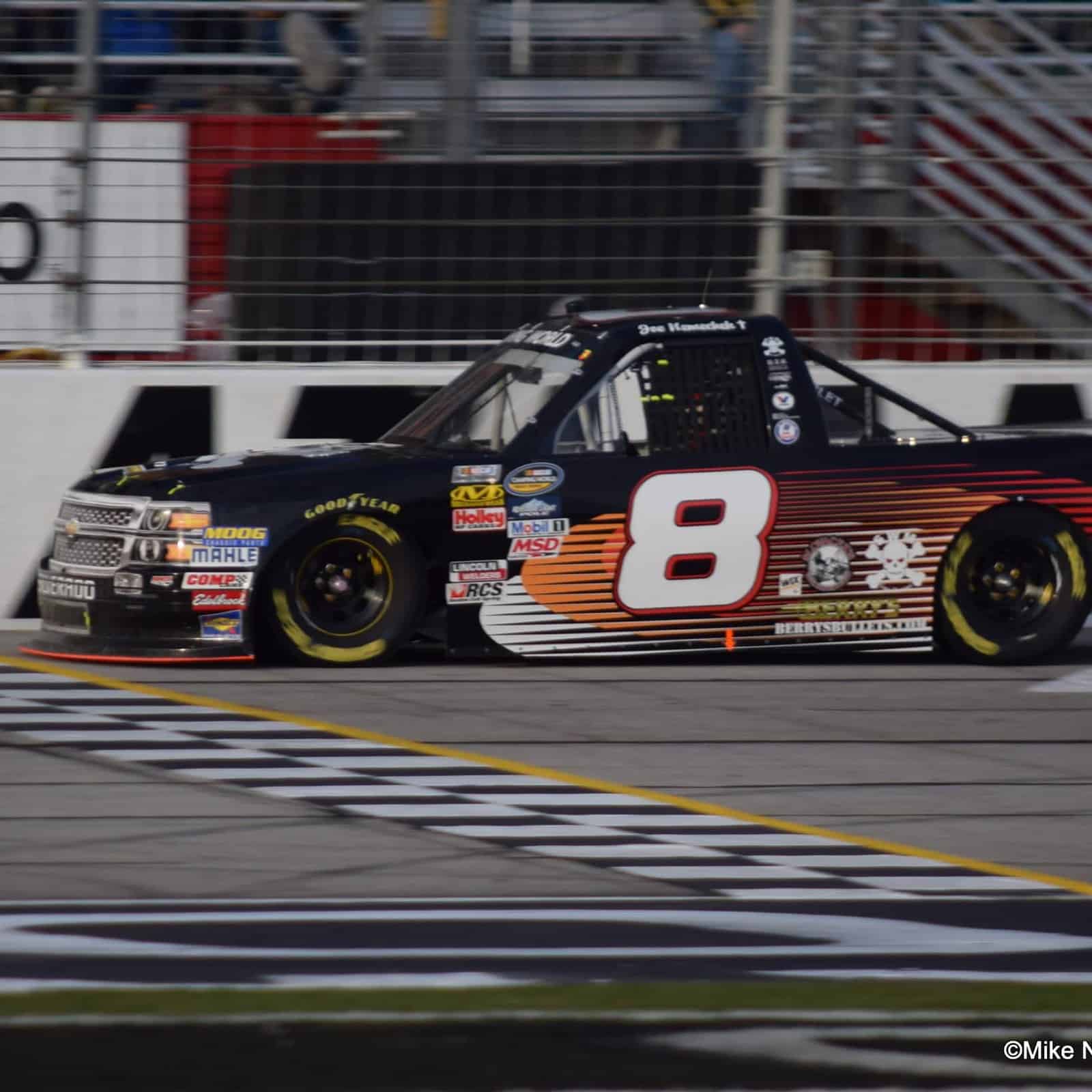 In a Nutshell: John Hunter Nemechek survived the war at Atlanta Motor Speedway and wheeled his way to a second career victory in Saturday’s Great Clips 200. In a race that was slowed by a late-race red flag, Nemechek inherited the lead from Christopher Bell inside 10 laps to go and held off a charge from Cameron Hayley to take the win by 0.305 seconds. Timothy Peters and Daniel Hemric finished third and fourth, respectively. Meanwhile, Grant Enfinger, Ben Rhodes and John Wes Townley took the checkered flag three-wide, separated by mere inches, but it was Enfinger who got the edge and rounded out the top 5.

Who Should Have Won: Christopher Bell. Much like a good chunk of last season, the No. 4 Toyota was stout on race day, and Bell wasted little time chasing Matt Crafton before taking the lead for the first time on lap 7. Bell overcame a tire failure that put him a lap down following an unscheduled pit stop and a late-race pit road mistake that cost him the lead. It looked like he was a lock for Victory Lane inside 10 laps to go before another tire failure ended his day. The 21-year-old led three times for 42 laps before being forced to settle for a 26th-place finish.

Daytona winner Johnny Sauter struggled with speed all day on Friday; during a trio of practice sessions for the series, the driver of the No. 21 Chevrolet managed to post a 13th-quickest lap in the first practice but dropped through the field the rest of the afternoon. After qualifying 16th Saturday morning, it looked like the team had figured out at least a bit of speed, but Sauter still had half of the field to pass if he was going to have any hope of competing for a win.

The problems for the No. 21 team began before the green flag even flew when Sauter couldn’t even get the truck fired when the field began pace laps. A quick trip down pit road allowed the team to help him get going, but the newest addition to GMS Racing was left to start at the rear of the field.

Having made up ground through a long green-flag run to open the race before the first caution flew, Sauter was inside the top 10 when his truck just shut off on the following restart. Taking the No. 21 down pit road, the team initially planned to change the ignition box but opted not to when Sauter got it running again. But a lap later, he still couldn’t get up to speed and was forced to go to the garage for repiars.

While the crew quickly changed out the ignition box and got Sauter back on track, he was still nine laps down and well out of contention for a trip to Victory Lane after a thrilling win last weekend. The No. 21 team limped home in 28th, and Sauter dropped nine spots in the standings to 10th.

Despite the struggles, Sauter walked away from Atlanta with a much more positive perspective than you would have expected.

“The difference between yesterday and today was incredible. I don’t know why we had issues but I’m glad we figured it out and were able to get a shot to run some good lap times and make improvements,” Sauter said. “It’s just unbelievable how great the No. 21 Chevrolet ran once we got back out there. I can’t thank Marcus and these guys enough for sticking with me. It’s early in the season but I really think we’re on to something big here at GMS Racing. I’m ready for Martinsville. I hate that we have to wait so long to get back on track but I’m excited about what we’ll have when we get there.”

The good news for Sauter is that a drop from first to 10th in points isn’t as much of a harm this year than in years past, thanks to the Chase. While he doesn’t want to continue a free-fall through the standings, the small consolation prize is that he’s already qualified to race for the championship after winning last weekend.

Kyle Busch Motorsports came into Atlanta Motor Speedway looking to check off the final active track on the schedule that it hasn’t won a race at, and at the beginning of the race, it looked like Bell might be the one to take the KBM flag all the way to Victory Lane.

But it wasn’t meant to be for the organization Saturday afternoon. The trio of Christopher Bell, William Byron and Daniel Suarez started third, 15th and 13th, respectively, but none of the three actually got to finish the Great Clips 200.

First to fall was William Byron, who was reeling in Matt Crafton just past the 50-lap mark when his engine expired in a large puff of smoke. The No. 9 Toyota was towed straight to garage and loaded up to head back to the shop; Byron was the first truck out of the race and finished 32nd.

Meanwhile, Bell led early before a tire failure sent him down pit road for an unscheduled pit stop and right off of the lead lap. After taking advantage of the wave-around, Bell managed to once again race down Matt Crafton to take the top spot, which he held until the caution clock expired for the second time on lap 107. A mistake pulling into his pit box, thanks to the sun in his eyes, dropped Bell to fifth for the following restart.

Shortly after the green flag flew, chaos ensued when Bell moved up the track and clipped teammate Daniel Suarez, who was racing side-by-side with Crafton for the race lead. The spinning No. 51 Toyota clipped the right rear corner of the No. 88 Toyota, and both Suarez and Crafton took hard hits to the SAFER barriers. Both drivers looked visibly shaken after their trucks came to rest, but were released from the infield care center shortly after arriving.

Following the red flag period to clean up the carnage from the Crafton/Suarez wreck, Bell once again took the lead, this time from Cameron Hayley, and it looked like he was home free en route to Victory Lane as his lead expanded. But with just eight laps remaining, that pesky right front tire let go and Bell was sent hard into the outside wall.

After watching team owner Kyle Busch go to Victory Lane earlier in the day in the XFINITY race, KBM had high hopes of complimenting that win with one of its own. Instead, all three trucks were loaded up on the wreckers and sent home with the consolation prize of knowing the team has plenty of speed this year.

No. of Rookies to Finish in the Top 10: 2; Grant Enfinger, finished fifth; Ben Rhodes, finished sixth

Rookie of the Race: Grant Enfinger

“I was fighting tightness a majority of the race. I got shuffled back on the opening lap of the event, which hurt us with track position but I fought my way back up and came out with a truck in one piece and a top-5 finish. I had one fast Alamo Rent-A-Car Chevrolet thanks to my crew chief Jeff Stankiewicz and my No. 33 GMS Racing crew who worked so hard this weekend and at the shop to prepare this bullet. I’m so appreciative of this opportunity and wouldn’t be able to do it without the support of Alamo Rent-A-Car, Champion Power Equipment, WURTH USA and Portable Shade.” Enfinger

Points Update: The entire top 10 is separated by a mere 14 points two races into the season. Parker Kligerman leads the standings after back-to-back top-10 finishes to open the year, up two spots from last week. Daniel Hemric jumped five positions and trails Kligerman by a single point. Race winner John Hunter Nemechek moves up 12 spots to third, followed by Timothy Peters, who moved up eight positions to fourth. Tyler Young, up one spot, rounds out the top 5.

Ryan Truck and Brandon Brown each dropped multiple spots and now sit sixth and seventh, respectively. Rookie Ben Rhodes moves up eight positions on the strength of a sixth-place finish to eighth, followed by fellow rookie Grant Enfinger, who advances nine spots. Meanwhile, Johnny Sauter, who led the standings after his win last week dropped all the way to the bottom and rounds out the top 10.

“I was debating on the radio whether I wanted the outside or the inside line. I had restarted on the outside twice there and Jerry (Kennon) came on the radio, and he said ‘Bottom, bottom, bottom. Do not restart on the outside. I don’t know what it is about this place, but it’s really slick on the top. It’s a great way to get our second win. The pit crew won us this race. I can’t thank all those guys enough. It’s an unsponsored truck for us again – two times in the winner’s circle.” John Hunter Nemechek

“I’m beating myself up a little bit. It was a great run for our Cabinets by Hayley Tundra team – best career finish. I can’t complain about that, but I just know in the back of my head if Matt Crafton was in my truck, he could have won that. I just – I needed to run a little bit harder, but great run to start up this year. This was my hardest track all year. I needed to get this one over with and to come out of here second, I’m pretty happy with the team and proud of everything Toyota, everybody has done for me. It’s just an amazing start to the year.” Cameron Hayley, finished second

Up Next: The Camping World Truck Series will take the next month off before heading to Martinsville Speedway Saturday, April 2. The Alpha Energy Solutions 250 will be broadcast live on Fox Sports 1 at 2:30 p.m. ET and can also be heard on your local MRN affiliate or SiriusXM channel 90.

Pfft! Im happy for John HN, but he had a 3rd – 4th place truck at best & was the benefactor Nascar systemic manufactured drama! The caution clock FUBAR’ed [fouled up beyond all recognition] this race. Without the caution clock, we would have had a naturally occurring round of green flag stops in the closing laps. But the 2nd clocked caution flew with just over 20 laps to go & erased the need for green flag stops. This farcically mandated that the field be bunched up. Then, as designed & promoted, on the ensuing restart, a rookie (Bell) hooked & violently wrecked the two front runners (Suarez & Crafton). Which gifted this race to a team & someone (JHN) that in no way earned it! Did the caution clock help Suarez’s & Crafton’s team budgets? Do Suarez & Crafton fans [or any legitimate race fan] like it when top performers, who earn & deserve race wins, get wrecked or injured by Nascar’s whore’ed up manufactured BS? How does Nascar figure that this farcical caution clock legitimately “improving it’s product” …when all it does is destroy the integrity of their events?