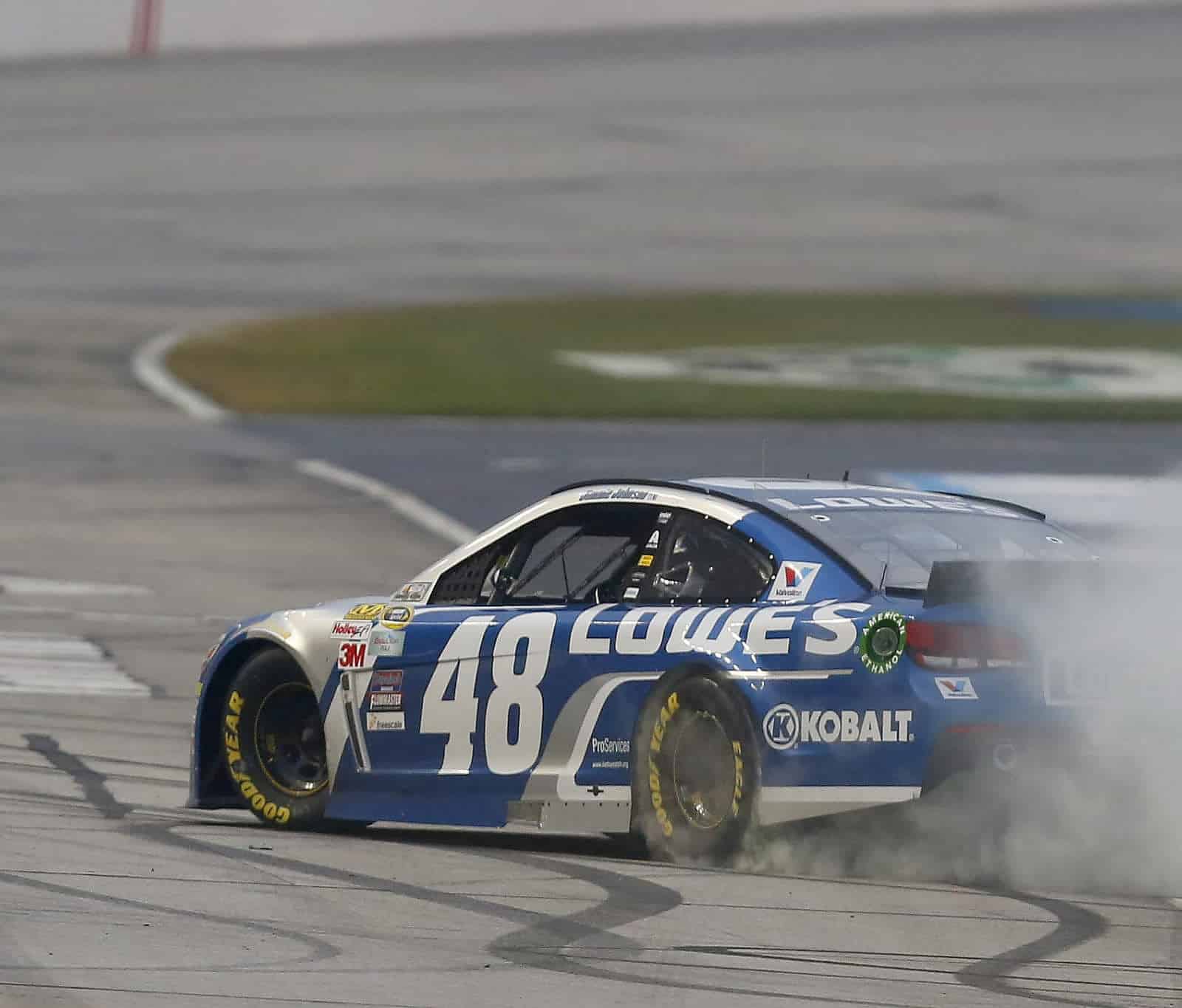 We’ll give a call to the “new improved” Kyle Busch. Busch set the fast time in Friday’s qualifying only to have that time disallowed because of a rear toe setting being out of spec after his run. Thus Busch had to start Sunday’s race at the back of the field. In years past, that would have been a disaster with Busch getting angry and trying to charge up to the lead in the first 20 laps. Time and time again, we’ve seen Busch at the wheel of a fast car suffering a misfortune, losing his temper, and wrecking out of races. Instead on Sunday the reigning Cup champion methodically worked his way towards the front, emerging solidly in the top 10, then the top 5. In the overtime portion of the race, Busch had a shot at the win, but was nipped at the line by Dale Earnhardt Jr., relegating the No. 18 to third. Still, Busch left Atlanta with the highest points total. (Though thanks to the Chase seeding nonsense he’s listed as third.) Perhaps Busch learned an important lesson last year, one that separates the fast young drivers from perennial title contenders: Hitting hard stuff going fast hurts. A bunch.

We won’t call it a shout-out but speaking in a very loud conversational tone kudos to Chase Elliott as well. Daytona proved a disaster for Elliott despite starting on the pole. An early season disappointment can betough to put aside for a rookie driver particularly one who entered the big leagues with such high expectations. On Sunday, Elliott remained in or around the top 10 all afternoon despite the new rules package and low grip that bedeviled some more veteran drivers. Elliott wound up eighth at the end of the race. To finish in the top 10, you have to finish races. To finish in the top 5, you need to routinely finish in the top 10. And once you can finish in the top 5 consistently, you become a threat to win races. Elliott’s solid finish won’t make the highlight reels, but it clearly delighted his highly partisan Georgian fans on hand. As Jon Bon Jovi once queried “Who says you can’t go home?”

The low downforce package was implemented in an attempt to make NASCAR racing more exciting. There was evidence that it might do so eventually, but no reasonable person saw the change as an overnight fix or a guarantee that every race was going to be a barnburner featuring a five-wide photo finish at the stripe. Doubtless Goodyear erred on the side of caution for this first race, particularly on Atlanta’s well-worn and notoriously abrasive surface. (The last time this track was paved was 1997. Remember when Geoffrey Bodine took the pole at over 197 MPH? Heck, do you remember Geoffrey Bodine? I think I saw him snipe hunting with Jeremy Mayfield, Robby Gordon, and Jimmy Hoffa out back last week.) There were some tire wear issues early but as the track rubbered in, they became less of an issue. Perhaps Goodyear will be emboldened to bring even stickier rubber with even more dramatic fall-off in the future. One race into the season with the low downforce package I’d conclude, “Man, the dope is there’s still hope.”

Where…did the polesitter and the defending race winner wind up?

Kurt Busch– Busch inherited the pole when his younger brother ran afoul of the inspectors post-qualifying. He ran in the top 5 most of the day, but some slower pit stops late in the race and a loose car sent him backwards. Despite that, Busch was able to rally back to a top 5 finish.

Jimmie Johnson– Johnson ended up right where he did last year….celebrating in Victory Lane at AMS and off Kevin Harvick’s Christmas card list. To win, Johnson had to overcome an unplanned pit stop early in the event caused by a loose wheel and while he clearly didn’t have the fastest car Sunday the race is not always to the swift….

A lot of pundits, this one included, figured that the Atlanta race was going to be slowed by frequent cautions as the drivers adjusted to the low downforce package and tires blistered and failed as a result. Instead the race went caution free for almost two-thirds of the scheduled distance before a potentially deadly (sarcasm dripping off each key-stroke there) coffee cup was spotted outside the racing groove. As a result, most of the race was fairly sedate (some might argue it was even monotonous) though at irregular intervals, there was in fact some good racing. (I’m thinking of Harvick and Martin Truex, Jr. swapping the lead back and forth there for a while and the three-way battle between Earnhardt Jr., Brad Keselowski and Kyle Busch.) Ryan Newman’s late spin sent the race into overtime so for a second week in a row non-fans can be excused for thinking that you don’t have to watch an entire stock car race, all the action is in the last five minutes.

When you don’t have the fastest car, sometimes a driver and team has to gamble. Chad Knaus decided to short pit the No. 48 with 50 laps to go, a move that initially dropped Johnson off the lead lap. But he was able to make up a lot of ground with that fresher rubber and as the other leaders peeled off to the pits, Johnson emerged as the leader with a solid 14 second gap back to second-place Harvick. Harvick done licked all the red of his candy in a determined effort to catch back up. After that, Johnson merely had to get a good restart in overtime to win the race for a second consecutive year.

I only watched the first 65 laps and the last 50 laps but I did see the final pit stop sequence (the one with about 40 laps left). I don’t understand why everyone keeps saying that short-pitting won it for Johnson. It certainly helped but what helped even more is that the 4 team had trouble getting one of the front tires off and lost about 6 seconds as a result compared to the 48’s time (maybe more on the overall time from entry to exit of pit road). Without that problem the 4 would have probably gotten back around the 48 before Newman blew a tire.

Otherwise I am shocked and stunned that NASCAR let that race go 200 laps before finding a reason to throw a caution. That definitely impresses me but it’s unheard of over the last 10 years. For once all the drivers/cars that sucked all race couldn’t hide behind the lame rules to stay on the lead lap with multiple wave-arounds (no glass slipper for the princess).

What was really cool was that I didn’t feel any anxiety that I usually would get (prior to Gordon retiring) when I walked away at lap 65 to do yard work. I wasn’t constantly wondering what I was missing, if my driver was still on the lead lap, if my driver had an issue, etc.,, I was totally unburdened by NASCAR. I am really enjoying that.

Bill B, I did about the same. I watched the beginning of the race — probably the first 30 laps then decided that wasting the beautiful weather staying inside was not a good way to spend my day. I came back in to see the last 40 or so laps.

Like you I was surprised when I caught some of the recaps that there hadn’t been a bunch of cautions.

And it was very liberating and enjoyable NOT having to “worry” about how Gordon was doing.

What, no comment about kenseth, the gasman, the cree chief and spotter and na$car control having communication issues?

Personally I still got a Sunday afternoon map.

Bill B, unburdened is spot on. I got home and tuned in at the command to start engines. Of course i was able to hear boogity !….. lame does not begin to describe that… Was in and out till about 25 laps to go. I did not even turn it on on radio as I was in my workshop. ….. GinaV24, I do remember Jeff saying ” I’m loving what I am seeing ” in reference to the racing. It is clear he must have been watching the track and not the “on air ” monitor for the view that we at home were getting….. Janice, I am sure you meant nap. You sure as heck did not miss anything…. LOL… I see tonight that ratings were down 25 or more percent. I could tell “them” why, but “they” don’t care. This never missed a minute of a race fan for many years is really doing well at being a casual fan. I guess the 800 mil. a year in tv money makes mine or anyone else’s opinion meaningless to BZF. O well, if I remember, I will tune in to 15-20 minutes of next weeks parade.

Didn’t seeca lap but listened a little and read a lot of comments from people about Gordon watching battles throughout the field. How many of us recall there being an incident on track in pre-2001 NASCAR and hearing Ned Jarrett say, “I had been watching that for about 3 laps…” If Gordon continues to follow more than just the monitors, he will be really good in the booth.

it would be really nice if the TV producer would show the fans at home some of that action instead of just letting us hear about it from one of the announcers.

Ratings aren’t going to go up if they just continue to do the same old, same old but then again the $ is already spent and no one in NASCAR or in charge of the TV stuff really cares about the fans.

Oh, I don’t disagree that we should be seeing it. I was trying to compliment your boy by saying at least he’s trying.