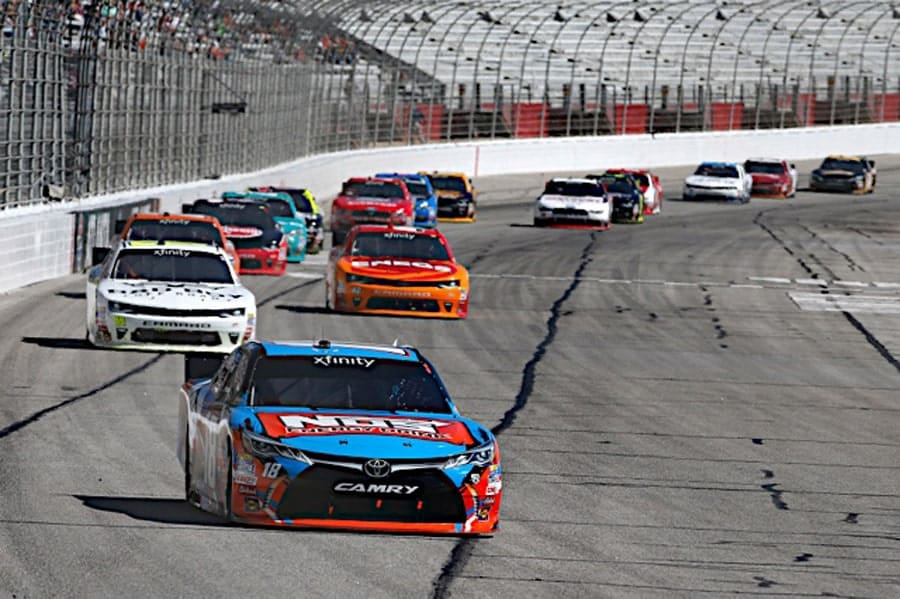 Following the XFINITY Series’ second race of the season, the biggest storyline was Kyle Busch, once again, curb-stomping the competition on his way to his first XFINITY victory at Atlanta Motor Speedway. Busch faces a similar task this weekend at Las Vegas Motor Speedway, another venue where he has never won an XFINITY race. However, there will be much more to watch than Busch when NASCAR’s second-tier division rolls into Sin City.

Las Vegas has hosted nine XFINITY races since the track was reconfigured in 2006. Only two of those events were won by series regulars: Ricky Stenhouse Jr. in 2012 and Sam Hornish Jr. in 2013. In both cases, it was a sign of good things to come for the winners. Stenhouse went on to win five more races in 2012, more than any other series regular, and claimed his second consecutive series championship. The following year, Hornish’s win was one of just four by XFINITY regulars. Although Hornish did not win again, he put together a strong season and came up only three points shy of the championship.

Much like Atlanta, Las Vegas is often a preview of who will do well throughout a given season. A good performance at Vegas usually indicates that a driver will also run well at the similarly-configured 1.5-mile tracks that make up one third of the XFINITY schedule. In 2014, Brad Keselowski’s Las Vegas triumph was the first of five wins that year in only 11 starts. Last year, Austin Dillon won Vegas and three other races, finishing outside the top 10 only four times in 20 starts. Even among Sprint Cup regulars, those who win at Las Vegas tend to have excellent XFINITY results later in the year.

Another storyline worth watching is whether or not the mostly revolving door of winners at Las Vegas will continue. Since the 2006 reconfiguration, Las Vegas’ nine races have featured eight different winners. Only Mark Martin, who claimed victories in 2008 and 2011, was able to repeat as a victor in that time.

What are the chances of seeing a ninth different winner in 10 years? Dillon and Keselowski are the only drivers from the group of eight winners that are on the entry list for Saturday’s race. Cup Series regulars Busch and Chase Elliott, the two drivers with a win in 2016 so far, could continue the trend, but the door certainly sits open for an XIFNITY regular to take home the trophy. JR Motorsports drivers Elliott Sadler and Justin Allgaier have looked strong in the opening weeks, while Erik Jones and Daniel Suarez should have good days too. If you are looking for more of a sleeper, consider Brendan Gaughan. The veteran driver last won at Kentucky in the fall of 2014, and would no doubt like to notch a win at his hometown track as much as Busch.

Yet even if the probable scenario plays out and a Cup Series driver runs away with the victory, Las Vegas will still be important to XFINITY regulars with hopes of making the Chase. Five of the seven Chase races, including the season finale at Homestead-Miami Speedway, take place at 1.5-mile tracks. Success at the intermediate speedways is more important than ever, and that means that Las Vegas’ position as a springboard to championship runs has never been more powerful.

Indeed, what happens in Vegas does not always stay in Vegas. Sometimes it goes all the way to Homestead.

Two Weeks In, Both Races Won By Cup Series Drivers.

Again like I have said before KEEP CUP DRIVERS OUT OF THE SERIES…….

Cup Drivers have led 250 Laps of 283 Laps ran so far. That tells me a XFINITY DRIVER DON’T STAND A CHANCE…

What does Kyle Busch have to prove any more in the Xfinity Series, WE KNOW HE CAN WIN IN THAT SERIES….

Rod you are correct, and who is this author trying to fool? This will be a Busch-Keselowski show and the rest fighting for scraps. Two cup champions who should have grown up by now and realized beating up on small busch teams doesn’t prove a darn thing. Oh well another week that I won’t be watching this sham of a series.

Gentleman, The Cup drivers are the reason no one watches the lower two series. Viewership is so low that SportsMediaWatch doesn’t even bother to track them. It’s over. I would suggest that you do as the rest of America has done and find something that is actually entertaining.

I thought it might be good for the Xfinity Series to have a chase format
Now that two races have passed without a regular in the series getting a victory, one has to wonder if this was really the best idea for a series that is almost always dominated by upper tier drivers.

Sure, the idea to give the Xfinity Series and even the Camping World Truck Series seemed like a great way to increase viewership, competitiveness among drivers and excitement in the bottom two series, but all that will likely be overshadowed if Sprint Cup drivers continue their history of dominance in the Xfinity Racing Series.

In fact, out of the 33 races in the Xfinity Series last year, only ten races were won by a driver competing for a championship in that series. That means Cup drivers captured the checkered flag in 22 of the 33 races last year. The trend becomes even more disturbing if you look at the 2013 Xfinity Series season, where Cup drivers took home the trophy 27 times, including the last six races of the season.

That history of dominance was continued this year at Atlanta, where defending Sprint Cup Series champion, Kyle Busch led 119 of the scheduled 163 laps in The Heads Of Georgia 250 and ultimately came away with the win. Unfortunately for Xfinity Series regulars, this victory marked the second time in 2016 that a Sprint Cup driver has won a race.

Looking further into some of the statistics in 2016, four of the drivers that finished in the top-ten during The Powershare 300 at Daytona were Cup Series regulars, including the top three finishing positions. Even worse, Cup Series regulars combined to lead a total of 102 laps in that Daytona event.