“There are other worlds than these.” If you are a book nerd, like me, you might recognize this as a line from Stephen King’s The Dark Tower series. In this case, I’d like to alter that to say “there are other races than these,” so that I can use it as the basis of my little piece of commentary this week. Stay with me on this one because it manages to hit a couple of interesting points and it does actually pertain to NHRA.

It started with an innocent question from a non-motorsports oriented coworker a few weeks ago about the level of diversity in racing. I happily started to fill him in when he followed his first question with one about how many minority drivers there are in NASCAR and does Danica Patrick really suck. I write about NHRA and sometimes IndyCar. I don’t write about NASCAR, but this happens constantly. For most of the uninitiated, motorsports and NASCAR are the same thing.

Much of the time, that’s pretty much the end of the conversation for me. The next thing I tend to say is that I don’t really know since I don’t cover NASCAR. Sometimes I try, as I did on this occasion, to add the “but in NHRA we have plenty of diversity…” though I’ve had mixed results with that approach. I might as well have said the words “drag racing” in Swahili. If I didn’t know about NASCAR, as far as they were concerned, I didn’t know about motorsports. That’s a bit of a letdown.

Indeed, watching the masses descend on South Georgia Motorsports Park a couple of weeks ago for the big radial race gives me some hope too. It’s all drag racing and while the diehards definitely have their preferences, when you are trying to get the uninitiated to even know you exist, we’ll take it anywhere we can get it.

I tried again today to brag on the diversity in drag racing to that same coworker, telling him all about the all-female Top Fuel final. I got just about as far as I did last time, but I don’t scare off easily. I still don’t cover NASCAR, but if you want to talk about motorsports, I am happy to oblige!

* NHRA will make 2016 a season-long 50th anniversary celebration of the Funny Car class. Funny Cars officially debuted in 1966 after competitors began modifying their cars with bigger motors, longer frames, and bigger rear tires that were moved up just a touch, making for cars that looked a bit “funny.”

The history, stars, and cars of the class will be highlighted throughout the season with exhibitions, car displays, and appearances by some of the legends of the sport at several events.

“The Funny Car class continues to be a flagship for the NHRA and in 2016 we are thrilled to be able to celebrate 50 years of the cars, stars and amazing performances that have made that category one of the most popular in NHRA history,” said NHRA president Peter Clifford. “ This celebration is for the fans, because we know how much they love the unpredictable nature of these finely-tuned 10,000 horsepower machines.” 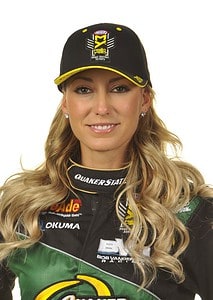 Some things most people don’t know about Leah: Like so many of her fellow drivers, Leah is a graduate of the NHRA Summit Racing Jr. Drag Racing League. She began racing at the age of 8 and has raced every season since on at least a limited schedule. She also won the 2010 NHRA Hot Rod Heritage Racing Series in a Funny Car in addition to her time in Pro Mod and currently in Top Fuel.

Want to know more about Leah? Check out this Frontstretch Beyond the Cockpit with her from last season.

Let’s stick with the theme and take another look at Leah Pritchett’s Top Fuel win this past Sunday from the CARQUEST Auto Parts NHRA Nationals from Phoenix. It was Pritchett’s first win in the category. She’s also the first female winner in Top Fuel since Hillary Will won in Topeka in 2008. Pritchett faced off against fellow female competitor Brittany Force, the first all-female final in Top Fuel since 1982, when Shirley Muldowney went up against Lucille Lee. The 1982 matchup was the only other all-female Top Fuel final.

Word of the Week: Burnout

Watching the cars do burnouts before a run is a fan favorite, but it serves more purpose than simply to amuse spectators. Competitors roll through water in an area called the waterbox to wet their tires, and then do the burnout both to heat the tires as well as clean off any debris that might have been picked up on the way to the staging lanes. It’s an important part of race prep that just happens to look really cool too.

Why do race seasons always seem to get off the starting line in fits and spurts? The NHRA takes a few weeks off before returning to action March 17-20 for the Amalie Motor Oil NHRA Gatornationals from Gainesville, Florida.