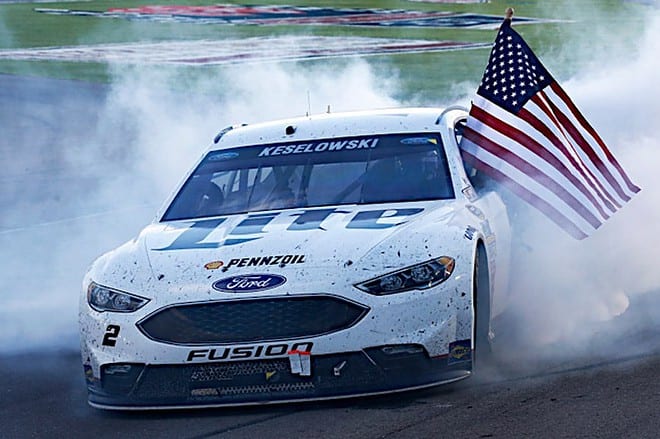 Who’s in the headline – It had been 33 races since Brad Keselowski visited Victory Lane. Keselowski took the checkered flag first in Fontana last year in the fifth race of the season. On Sunday, he led the race three times but only led a total of 24 laps. The win put a third different manufacturer in Victory Lane in 2016.

What happened – Kurt Busch started on the pole and led the race until another idiotic competition caution. Denny Hamlin was first off of pit lane and led after the restart until Joey Logano made an on-track pass for the lead. A green-flag run ensued and Jimmie Johnson took over the lead when a second restart occurred from a debris caution for an apparent water bottle. Logano made a brief pass for the lead on Lap 132, but Johnson rebuffed him and held onto the point through another round of green flag stops.

Another debris caution happened just after Logano took the lead from Johnson on Lap 177, and he held onto the point until an accident in turn two saw Kyle Larson and AJ Allmendinger get together. Matt Kenseth held the point for six laps after the restart from that caution before he lost the top spot to Johnson. Another caution gave the lead back to Logano.

On the penultimate restart of the race, Kyle Busch made a bold move to sweep past the two Team Penske teammates at the front of the pack. Busch held onto the lead after a caution flew for a big accident that took out Kenseth and Chase Elliott. Busch looked to be headed to victory, but as the laps wound down, Keselowski chased him down and passed him with six laps to go then pulled away for the win.

Why you should care – The new aero package was designed to make better racing. The ability to push hard at the beginning of a run or conserve until the end would allow drivers to run down a leader and make a pass. While Atlanta didn’t have as much activity at the point as fans hoped, Las Vegas featured three different runs by cars from second to the lead during green-flag runs, including the decisive run by Keselowski to chase down Busch and pass him for the race win.

The teams may be gaining back some of the downforce that they have lost, but the racing has been better than the past few years. Assuming the sanctioning body stays on top of the gains that teams make and continues to tweak the package to keep taking the downforce away, the racing should continue to trend in a positive direction.

What your friends are talking about – Try as some folks might to tell you that the sport is trending in a positive direction, the metrics continue to say the opposite. TV ratings for Atlanta were low. 27 percent lower than the same race in 2015. The 4.1 final overnight rating is the lowest for the second race of the season since Fox began broadcasting the sport in 2001. While the ratings are down, the race was still the highest rated sporting event of the weekend, .9 higher than the Warriors/Thunder game on ABC which drew a 3.2 rating.

The weather was a big story this weekend. Rain in the desert delayed the race. An even bigger story was the wind. There were gusts in the low 40s and the wind was a major factor in the handling of the cars. Teams had damage to pit boxes, umbrellas and car covers. Photographers and media folks were sandblasted for the entire day and their equipment surely took a beating as well.

Tony Stewart was at Las Vegas this weekend and met with the media. There is no timetable in place yet for his return. Until he returns, Brian Vickers and Ty Dillon will split the No. 14. Dillon will drive all races when Bass Pro Shops is the primary sponsor while Vickers will pilot the ride for the rest.

Speaking of Stewart, the Tulsa County Sheriff has wrapped up their investigation of the incident at the Chili Bowl involving an off duty sheriff’s deputy and the three-time Cup series champion. The altercation went viral on YouTube before it was discovered that the gentleman was a peace office. The statement released by the sheriff said that the investigation into the incident has been concluded and handled according to policy. Any discipline meted out to the deputy was not revealed.

Hendrick Motorsports might be even harder to beat in 2017 and beyond. The company is not looking to replace their agreement with Stewart-Haas Racing. While they won’t be making as many engines and chassis, they will not be releasing any employees. Rick Hendrick shared that the organization has been running at full capacity to fulfill their obligations to HScott Motorsports, Chip Ganassi Racing and SHR. They anticipate refocusing the energies of some employees from their lease program to research and development. The end result is HMS pushing the bounds further than they currently do thanks to greater efforts in development.

Who is mad – Kenseth is beginning to look like Stewart of 2015 in the “Who’s Mad” category. Stewart could have been in this category nearly every week last season and Kenseth is on pace to do it every week this year. This week Kenseth was involved in the wreck with Elliott on lap 225 which knocked him out and resulted in a 37th-place finish.

Larson was a pre-race favorite going into Atlanta but ended the event with a 26th place finish, three laps down. Sunday was another disappointing race with Larson spending half of the race clawing his way to the top 10 only to have a pit road speeding penalty drop him back into the 20s. He was then involved in an incident with Allmendinger. He followed that with another incident with Regan Smith and a 34th place run.

Vickers is filling in for some of the races in the No. 14 car and hoping to take equipment that has contended for championships to some strong finishes. Unfortunately for Vickers, that didn’t happen at Las Vegas. Following a 26th-place run at Daytona, Vickers was in the top 10 midway through the race and looking to move back up when the rear gear on his ride failed. With a limited number of chances to prove he can still get it done in a race car, Vickers can’t afford to be having failures derail his runs.

Who is happy – Austin Dillon scored his third top 5 of his career at Las Vegas. As he begins his third full-time season in the Cup series he is feeling like he is ready to have a breakout year. Mile and a half tracks have been his forte so it isn’t surprising to see him run well at Vegas. Dillon ran ninth at Daytona and 11th at Atlanta. The No. 3 is knocking on the door and just might break through to the Winner’s Circle this season.

Ryan Blaney qualified 14th for Sunday’s race and never ran below that point throughout the race. His sixth-place finish is his second-best run of his career and his best this year. Carrying the banner of the Wood Brothers in his Penske ride is shining a spotlight on the young driver but he is thriving to this point of the year.

Kasey Kahne has been under the pressure of the supposed “Hendrick Test Car” for years. He hasn’t won a race since Atlanta in 2014 and only scored three top-5 finishes last season. After a 23rd-place run at Atlanta, his first top 10 of the season has to have him feeling positive heading to Phoenix where he has a win, five top 5s and eight top 10s.

Keselowski is ties with Geoffrey Bodine, Neil Bonnett and Harry Gant for 44th on the all-time wins list.

This is Keselowski’s second career win at Vegas in eight starts.

Joey Logano finished second for his best run of 2016.

This is Logano’s second career top 5 at Vegas.

Logano has five career runner-up finishes. He is tied with nine other drivers for 83rd on the all-time list.

Jimmie Johnson finished third on Sunday for his 161st podium finish of his career.

This is Johnson’s sixth career podium at Vegas.

Ryan Blaney was the Rookie of the Race thanks to his sixth place finish.

Denny Hamlin, Jimmie Johnson and Brad Keselowski are one win away from locking into the Chase. The remaining drivers who would make the Chase based on points and their point position:

The new aero package had its second run at Las Vegas. 11 different leaders traded the lead 20 times, with four on-track passes for the lead. Racing was again all over the track behind the leaders and tire management actually came into play. The racing at Vegas was above average from the last few years and a late race pass for the lead added excitement. In the end the race wasn’t spectacular but it was worth four cold Bonanza Brown Ales from Tenaya Creek Brewery.

Where do you point your DVR for next week – The second weekend of the West Coast Swing takes place at Phoenix International Raceway. Coverage begins at 3:30 p.m. ET. on Fox. The race can also be heard on your local MRN affiliate or SiriusXM NASCAR Channel 90.

What is it that Mike Neff doesn’t do? The writer, radio contributor and racetrack announcer coordinates the site’s local short track coverage, hitting up Saturday Night Specials across the country while tracking the sport’s future racing stars. The writer for our signature Cup post-race column, Thinkin’ Out Loud (Mondays) also sits down with Cup crew chiefs to talk shop every Friday with Tech Talk. Mike announces several shows each year for the Good Guys Rod and Custom Association. He also pops up everywhere from PRN Pit Reporters and the Press Box with Alan Smothers to SIRIUS XM Radio. He has announced at tracks all over the Southeast, starting at Millbridge Speedway. He's also announced at East Lincoln Speedway, Concord Speedway, Tri-County Speedway, Caraway Speedway, and Charlotte Motor Speedway.
@MNeffShortTrack
Previous Pace Laps: Rookies Impress at Las Vegas, Daniel Suarez’s Hot Start and Trans-Am Getting into Gear
Next Entry List: Axalta Faster. Tougher. Brighter. 200