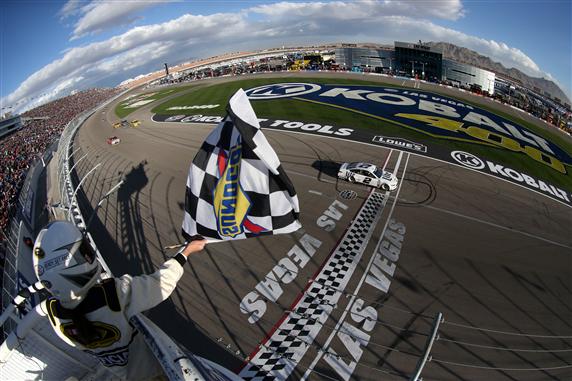 Just a few short weeks ago, when people were making predictions on who would make the Chase, win the championship and win the most races, it wasn’t uncommon to see the Team Penske duo of Brad Keselowski and Joey Logano on top of most of those columns.

After all, Logano won six races last season and probably would have made a run at the championship, if not for some “incidents” that you’re probably sick of hearing about already (think “Matt Kenseth,” “Kansas Speedway” and “Martinsville Speedway” for those of you who need a refresher).

Teammate Keselowski couldn’t have been far behind, right? He was in the Chase, too, and was just as strong as Logano, right? … Right?

See, that’s what I thought too. Except, when Keselowski won Sunday’s race at Las Vegas Motor Speedway, I heard the number “33” thrown out there … as in it had been 33 races since Keselowski had since been to Victory Lane.

I didn’t think that could be right, but it was. It’s been since the fifth race of last year at Auto Club Speedway that Keselowski had been to Victory Lane.

Now, that’s not to say that Keselowski wasn’t capable of winning more. He led 573 laps in the last six races of the 2015 alone (1,185 laps led throughout the whole season). Had Jimmie Johnson not made such a “quintessential” move at Texas Motor Speedway, Keselowski might very well have found himself in the Championship 4 at Homestead-Miami Speedway. Considering he finished second in that race, 2015 might have ended a whole lot differently.

Of course, you know what they say about “ifs” and “buts.” Kyle Busch went on to win the championship, Logano finished sixth in the final standings with Keselowski right behind him in seventh. It definitely doesn’t tell the whole story of their season, but there it is.

So when 2016 rolled around, many media members, fans, etc. predicted the return of the Penske duo (along with the other powerhouse teams that wound up beating them), perhaps in making a championship run.

Enter the season-opening Daytona 500, where Logano was the defending champion. Logano never made it all the way to the front and Keselowski led only one lap. In the final laps, the No. 22 car was in a position to potentially get to the front but was surrounded by Toyotas and Chevrolets and didn’t have the help he needed. Keselowski was mired in traffic. Logano finished sixth and Keselowski 20th. Not bad, but certainly left something to be desired.

However, Daytona doesn’t reflect the type of track that a majority of the schedule is made up of. Namely, intermediates.

Then came Atlanta Motor Speedway, a track that was supposed to showcase who the “real” players of 2016 were going to be. Again, Team Penske was at the top of that list (among others).

Surprisingly, neither was anywhere to be found. Neither driver led a single lap. Keselowski finished ninth while Logano finished 12th. Again, not horrible, but certainly a far cry from where so many expected them to be.

With NASCAR being such a “what have you done lately?” kind of sport, by the time Las Vegas rolled around, Team Penske had nearly been forgotten about. Of course, then the Nos. 2 and 22 cars showed speed in qualifying and practice and they were back on everyone’s radar, but without the same hyperbolic predictions on their performance.

And then – seemingly out of the blue – Team Penske seemed to pick up where they left off last season. While a variety of drivers showed speed during the race, Logano and Keselowski were in the thick of it right until the very end, including a gutsy call by crew chiefs Paul Wolfe and Todd Gordon to stay out during a late pit stop when others came in – a risk that could put them in a spot to run out of fuel. Keselowski led a total of 24 laps, Logano with 70, and they finished first and second, respectively, edging out Jimmie Johnson and Busch, two of the strongest cars all day.

So why such a big swing from one week to the next on otherwise very similar racetracks? Sure, Atlanta and Las Vegas have their own characteristics – a rougher surface for Atlanta being one – but they otherwise fall into the same category of intermediate.

“When we unloaded at Atlanta, didn’t have quite the speed we were hoping for,” Wolfe explains. “That was a little frustrating. We worked hard, didn’t qualify where we needed to be. Got our cars better for the race, but still not where they needed to be to contend for wins.

“From there, I think there were a few late nights back at Team Penske where guys worked really hard.  We felt like we needed more potential out of our cars. We worked very hard on some aero pieces, some different things. Felt like when we unloaded here at Vegas this week, we kind of showed that all that hard work paid off in qualifying, having both cars up front. As we translated into the race today, we showed the strength in race trim.

“Really all I can say is hats off for all the hard work back at the shop. There was a lot put in. This West Coast swing is very hard on the teams early in the season. We were able to bring better racecars to the racetrack and we got the results because of it.”

Vice Chairman of Team Penske Walt Czarnecki added to that:

“Just on what Paul said, this really took a little bit of a sting out of what happened at Atlanta. We thought we had two pretty good cars at Atlanta. Didn’t perform. Ended up with a decent finish. As Paul said, we had a team debrief meeting on Tuesday that went for an hour and a half that was thorough and candid. So Paul and Todd Gordon were pretty confident they were going to come to Las Vegas with two good cars.”

With Team Penske effectively being Ford Racing’s only championship-capable team (unless Roush Fenway Racing surprises everyone this year), it’s a big deal for them to be able to carry the strength of 2015 into this season. Now, Keselowski is all but guaranteed a spot in the Chase in the fall and, based on their run in Las Vegas, Logano probably isn’t far behind.

“Being in the Chase right now for Brad takes a lot of that pressure off, as we know,” said Czarnecki. “It really allows Joey then to really focus on getting that win.  I think even from a points standpoint he’s still in good shape, but we want to get those wins. We know that Team Penske is capable of running with anybody right now and being competitive.”

There have been instances in the past where a team’s strength at the beginning of the season doesn’t necessarily carry through to the end of the season. In this case, though, it’s hard to rule out at least one of the Team Penske cars making it into the championship, a post-season meltdown notwithstanding. The fact that the “guys back at the shop” were able to turn around their performance in literally a week’s time is extremely impressive and shows a resiliency and ability that only the powerhouse teams really have. It’s also not great news for their competition.

Now, what I’m not doing is predicting that either one of these two teams will win the championship. I have no problem with the elimination-style Chase format but picking a champion is all but impossible anymore. I do feel confident that the Nos. 2 and 22 cars are going to be around for the rest of the season in addition to many of the other major players in the Vegas race (Johnson, both Busch brothers, Kenseth before a wreck, etc.) but even making it to Homestead is a task. There are too many variables at play to make such a bold statement.

However, I think Vegas is going to become a blueprint for the major players of the 2016 season. Whoever thought the struggles of Team Penske at Atlanta were due to the lower downforce package might want to take a second look at the stat sheet from last Sunday because they aren’t going anywhere anytime soon.

Hard to get excited at anybody’s wins.. Race 26 happens and it is reset points to make all equal (which they are not). Sprint Cup Welfare. Iif you survive that nonsense, it seems Nascar at the PT Barnum show Homestead has a damn good idea who will close out the season labeled “Champ” with their warm and fuzzy feel good win and story to go along with the fakery. Never mind who really deserves it based on top 5, top 10’s, wins, most laps led etc. That DOES NOT MATTER.