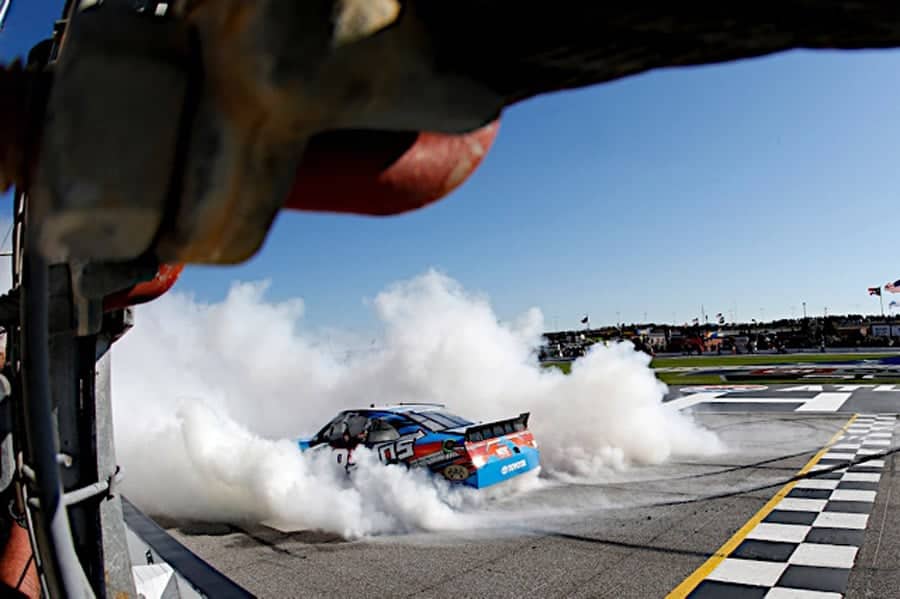 Defending Sprint Cup champion Kyle Busch picked up right where he left off last week in the XFINITY Series.

After securing his first XFINITY win at Atlanta seven days ago, Busch accomplished the same feat at Las Vegas Motor Speedway in the Boyd Gaming 300, putting on a display of dominance before his hometown crowd, starting from the pole and leading all but one circuit of the 200-lap contest.

“This is two for two, so it’s pretty cool to check that box off here in Vegas,” Busch said from victory lane. “There’s only one (track, Watkins Glen,) left, so we’ll see if we can get (a win there).”

Busch started from the pole and showed his strength early on, looking untouchable during the race’s long green flag runs. The only two drivers who could keep Busch in their sights were his Joe Gibbs Racing teammates, Erik Jones and Daniel Suarez.

Jones appeared to be Busch’s biggest threat, until he was tagged for speeding after a pit stop on lap 54. To make matters worse, Jones was caught speeding again while serving his pass-through penalty, and had to return to pit road for a stop and go penalty.

The penalties left Jones two laps down. He got one of them back with a wave-around during the second caution on lap 73, and received the free pass during the race’s third and final caution. Jones spent the last 58 laps trying to run down Busch, but the closest he got his finishing position of third.

Suarez, meanwhile, ran in the top five for most of the afternoon. He had his own troubles on pit road, getting held up by Joey Gase during his first stop, and later losing several positions sitting on pit road after a slow stop during the second caution. Suarez rebounded to second and tried to chip away at Busch’s lead during the final green flag stretch. With all the front runners keeping an eye on fuel, Suarez closed in on Busch during the final ten laps, but never got close enough to attempt a pass.

The Good
Brandon Jones deserves recognition for his strong start to the season. In a series populated by more seasoned racers and Sprint Cup regulars, the nineteen-year-old has scored finishes of seventh, eleventh, and sixth in 2016. Can he keep it up? Brandon Jones will certainly be one to watch as the season progresses.

The Bad
Brad Keselowski shocked everyone by being a complete nonfactor on Saturday. After starting 15th and fighting a car that never seemed to be quite right, Keselowski found himself a lap down just a quarter of the way into the race. Then, on lap 84, Keselowski was forced to pit road with a vibration, caused by a loose wheel. The unscheduled pit stop left the No. 22 team three laps down and unable to recover, culminating in a disappointing 15th place finish.
The Ugly
The only person other than Busch to lead a lap was Darrell Wallace Jr, who led one circuit during a green flag pit stop cycle. Unfortunately, “Bubba’s” strong run came undone on lap 137. Cody Ware went sliding through turn 2 in front of Wallace, and Wallace spun himself out trying to avoid Ware. The side of Wallace’s car slammed into the nose of Ware’s No. 25, jerking Wallace back around and right into the path of Justin Marks. It was the only major accident of the day, and NASCAR red-flagged the race for about 20 minutes to clean up the debris. Nobody was hurt in the incident, but Wallace, Marks, and Ware were all knocked out of the race. They finished 33rd, 34th, and 35th respectively.
Underdog Performance(s) of the Race
Brennan Poole had a strong showing at Las Vegas, finishing as the last car on the lead lap in 11th for Chip Ganassi. Ryan Sieg had another good race as well, finishing 14th.
Double Duty Interlopers
In addition to Busch and Keselowski, Cup drivers in the field included Chase Elliott, Austin Dillon, and Aric Almirola. Elliott ran as high as second but did not have the speed to catch Busch, ultimately settling for fourth. Austin Dillon, the defending race winner, finished right behind Elliott in fifth. Almirola wound up 12th, the first driver one lap down. Piloting the Biagi-Denbeste No. 98, Almirola raced Busch hard in the closing laps, allowing Suarez to take a sizable chunk out of Busch’s lead.

Quotable
“I’m so proud of everyone in Joe Gibbs Racing, and (crew chief) Scott Graves. The entire 19 Arris Toyota team did an amazing job. The car was super-fast, one of the fastest out there, honestly, all race long.” –Daniel Suarez after finishing second

“I thought our Interstate Batteries Camry was good enough to run with Kyle at times, and (I) really would have loved a shot to just kind of have had him straight-up.”—Erik Jones on his third place finish

“I think the 98 was inside of us, got us clear, so we were focused on him, and by the time we’d seen the 25 it was just too late. I was already kind of pitched sideways. It was a hell of a hit, but, you know, thank the lord that we all walked away okay. The second impact was pretty good too, but I’m here, I’m talking to you, I’m all good.” –Darrell Wallace Jr, describing the accident that ended his race

The Final Word
Las Vegas’ trend of different winners continued on Saturday, producing the ninth different winner in the ten races since the track was reconfigured. However, the winner himself was no surprise, and the level of dominance that he displayed was not a huge shock. either. It was clear from the outset that Busch would be a formidable opponent to any challenger, and the for the third time in as many races, long green flag stretches through the middle of the event limited the opportunities teams had to work on their cars.

It isn’t easy for anyone to so thoroughly destroy the competition as the hometown hero did, but the overwhelming strength of the No 18 team led to a forgettable race for everyone not named Kyle Busch.
Joe Gibbs Racing drivers started 1,2,3 for the second race in a row, and the Toyota team appears to have the strongest setups for the intermediate tracks right now. A lot can change throughout the year, and while JR Motorsports and Richard Childress Racing look strong as well, the road to the XFINITY Series championship may run through JGR.

Up Next
The XFINITY Series will run the Axalta Faster. Tougher. Brighter. 200 at Phoenix International Raceway on March 12th. Race coverage begins at 2:30 on FOX.

Do you call that a race he led 199 laps out of 200.
The same story Week after Week and Busch would have had a 3 wins if his wife and Joe Gibbs would have let him run in Daytona. it just sucks not to be able to see the potential of the Xfinity Regulars show what they got without at least 5 Cup Drivers in every race.

At least the Truck Series haven’t had the cup guys ruin their season yet, they have at least 2 truck series drivers with wins . I’m surprised that Kyle isn’t ruining that series like he has the Xfinity Series.

The XFINITY Series will run the Axalta Faster. Tougher. Brighter. 200 at Phoenix International Raceway on March 12th. Get ready to see Kyle Busch Win his 79th race and lead the most laps again.

Imagine that he could go blow everyone away yesterday during Xfinity race, But couldn’t hold off the guys today in the cup race for the win . WHAT A CHUMP !!!!!!!!!!!!!!!!!!!

The competition is a bit different in Cup. Gotta get his wins somewhere else.