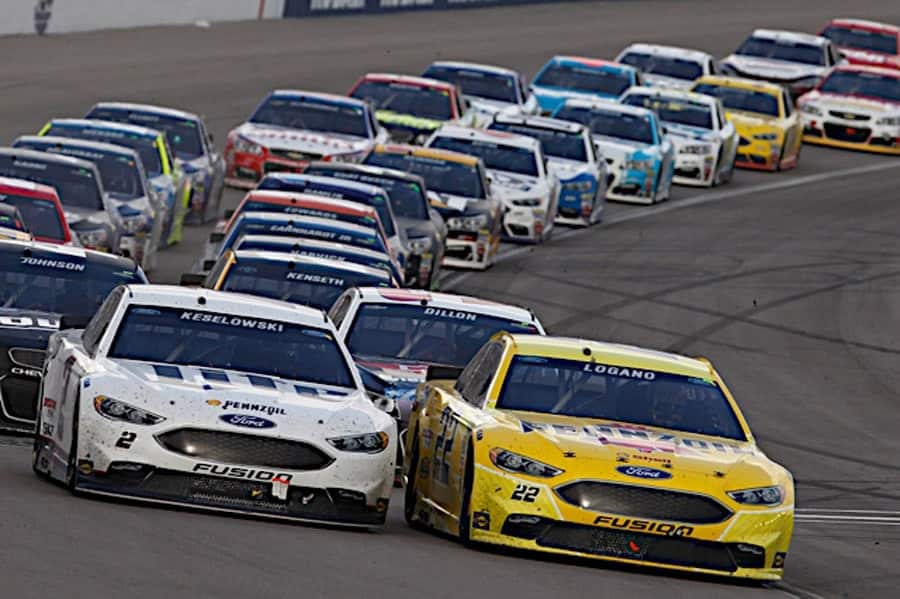 Last season, the West Coast stretch of Las Vegas, Phoenix and Auto Club belonged to Stewart-Haas Racing. Kevin Harvick won both Vegas and Phoenix, and Kurt Busch looked like he’d take the win at Auto Club until a late-race caution bunched the field up and allowed Brad Keselowski to win when all was said and done. For Keselowski, it was his only win on the 2015 season despite dominance on the 1.5-mile tracks the rest of the year.

Fast forward to 2016, and it is Keselowski in victory lane at Vegas, stealing the win from Kurt’s brother Kyle as the laps wound down. For Team Penske, Keselowski’s win was the first half of a one-two finish with Joey Logano taking second place. Owner Roger Penske won’t be content with this victory, however; he’ll want to complete the west coast sweep, something that rival Harvick wasn’t able to do last season.

The duo’s biggest competition in the upcoming race at Phoenix? Mr. Happy himself, who has finished first or second in seven of the last eight races at the track. While Logano and Keselowski are not on that level of dominance at Phoenix, they should be encouraged by the fact that they each finish in the top 10 more than half the time at the track. If they can run that way this weekend and Harvick runs into trouble, watch out for race two of the West Coast Swing to be checked off The Captain’s list.

Rain and Wind and Dust, Oh My!

It’s no secret that NASCAR and Mother Nature have a relationship akin to Logano and Matt Kenseth. Most of the time the two get along well, but every once in a while things flare up and the sport is forced to stand down when the rains come. And it’s not just the tracks you’d expect getting precipitation: last November the Phoenix race of all events was called early due to rain. On Sunday, the feud was again on full-blast, but this time instead of rain (although there was even a little of that) the main issue was wind.

Yes, wind. With gusts up to 50 mph, NASCAR on FOX claimed that the race was the windiest on record. One glance at the flagpole on the backstretch seemed to corroborate that story, leading most to assume the race cars would be wildly out of control in turn 3 with the tailwinds. While that didn’t happen, the wind was gusty enough to buffet cars around a little, and likely even played a part in Keselowski’s eventual victory.

Even more bizarre than the wind was the desert side effect it brought along with it: a dust storm. Now this wasn’t your blockbuster-typical, zero-visibility sand cloud – but it was enough to hinder the visibility of drivers and the cameras in turn 2 as well as the backstretch. Drivers were able to race through the dust, however, putting on the closest-thing to a Sprint Cup dirt race the series has seen since 1970.

Make Sure it Drives Good

Following the Atlanta race just over a week ago, sixth-place finisher Harvick said “Don’t worry about how fast you are in practice,” he said. “Make sure it drives good.” This was in reference to the two Atlanta practices where he placed 22nd and 15th. With the new low-downforce package, it was easier to pass cars and move to the front, something that any fan needed to take into account in making his fantasy picks. Otherwise, they might steer clear of a driver like Harvick.

The same theory was tested again this weekend by those finishing the race in the top 5. Race winner Keselowski was first, fifth and 15th in his practices. Runner-up Logano was second, 30th and 17th. Jimmie Johnson was eighth, 13th and 16th, while Las Vegas native Kyle Busch didn’t place higher than 14th in any of the three yet found himself leading late before eventually fading. Fifth-place finisher Austin Dillon was 18th, second and 11th.

All five drivers had to drive to the front. Keselowski, Logano and Dillon all started in the top 5 but only Logano had a race free of issues. Keselowski had a speeding penalty and Dillon was mired mid-pack due to confusion on a pit stop. Busch and Johnson both started outside the top 10. This new package has put the onus on driver ability and made it easier for teams to adjust on the fly. If the rest of the season is anything like the past two weeks, fans should be in for a great year.

Considering NASCAR is regarded by many to be overly sensitive in recent years in relation to throwing the caution flag (phantom debris, anyone?) it was a complete mystery as to why it didn’t throw the yellow immediately for Cody Ware’s spin during the XFINITY race on Saturday.

Ware lost control of his car while in the first set of turns and slide alongside the outside retaining wall before coming to a stop at the beginning of the backstretch. Darrell Wallace, Jr. tried to avoid the stalled car but ended up making contact with the left-front corner, shredding most of the passenger-side door off of Wallace’s car.

The important thing to remember is that the cars did their jobs and kept Wallace, Ware and Justin Marks (who slammed into Wallace after the initial hit) safe. What’s baffling is why NASCAR didn’t throw the yellow. It’s used when a driver brushes the wall, so it should be used when a car spins out. This led some Twitter users to suggest that NASCAR, with all of its spotters and other Big Brother-type cameras, didn’t see the initial spin by Ware happen and reacted only once Wallace was involved.

Is that what really happened? It doesn’t matter. What matters is keeping drivers safe, and if that means adding extra track spotters to ensure every inch is monitored at all times, so be it.

Chase Elliott, Ryan Blaney, Austin Dillon: all have entered the sport full-time since 2014 but none has been all that impressive (a couple Daytona 500 poles notwithstanding). That is, until Las Vegas. Dillon qualified in the top 5, bounced back from mid-race adversity and eventually settled in fifth. Blaney, running his first full-time season with Wood Brothers Racing, held his own with Johnson early in the race and slotted in behind Dillon when the checkered flag flew. And Elliott ran in the top 10 all day, getting himself up to the top 5 before being swept up in a late wreck with Kenseth.

Add in Logano, a seasoned veteran at 25 years young, and the top 10 took a slightly younger skew than in years past. For Blaney and Elliott, their efforts are indicative of the talent that got them to this year, their rookie seasons in the Sprint Cup Series. For Dillon, however, it must be asked if this new race package is the reason why he’s locked up two top-10 finishes this year – already halfway to tying his best Cup campaign ever.

Whatever the reason is, it’s good to see a handful of fresh faces at the top of the finishing order. With Jeff Gordon retired and Tony Stewart following, it’ll only be a matter of years before other high-profile names follow and someone has to fill the gap. These four young ones are already staking their claim to be the next big thing in NASCAR, and it’s good for the sport that it’s happening while the big boys are still out on the track.