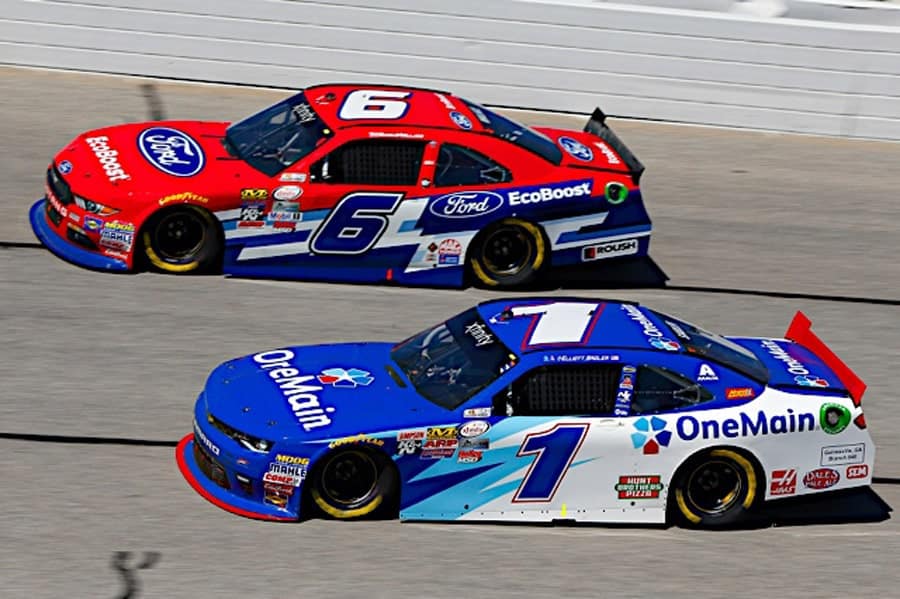 It is still early in the XFINITY Series season, but we are beginning to see which drivers will emerge as championship contenders. There are not many surprises among those names. Most fans assumed that Erik Jones and Daniel Suarez would be in the title hunt, and the Joe Gibbs Racing drivers have shown the most overall speed through three races. Ty Dillon and Justin Allgaier are meeting expectations thus far, but the Chevy drivers highest in points right now are a resurgent Elliott Sadler and rookie Brandon Jones. All four of them look like they will challenge the JGR Toyotas later this year.

So where does that leave the Ford teams? What drivers among them have the potential to step up and defend Chris Buescher’s title for the Blue Oval?

Currently, the highest Ford driver in the points standings is Ryan Reed. Reed stands a good chance of making the Chase on consistency alone, but is he really a championship threat? He did win the season-opening race at Daytona last year, but has not come close to winning anything or even finished in the top 10 since then.

The only other Ford driver in the top 10 in points is Jeb Burton. Burton, still a newcomer to the XFINITY Series, had a solid run at Atlanta with his new Richard Petty Motorsports team. However, the RPM XFINITY program has often produced up and down results, and that probably will not change with a young driver like Burton behind the wheel. The No. 43 team is another one that will probably be in the Chase but is not really championship-caliber yet.

That leaves Darrell Wallace, Jr, who is currently 14th in points after an eventful start to the season. Following a respectable sixth-place effort at Daytona, Bubba had a nice run at Atlanta spoiled after getting hit on pit road by another driver, sending the No. 6 car sliding nearly into the infield. Las Vegas went even worse for Wallace, who took a hard hit trying to dodge Cody Ware and complicated a crash that left some fans wondering what took NASCAR so long to throw the yellow flag.

Even though Wallace has never won an XFINITY race and has not gotten the finishes he deserves this year, he has the best shot of bringing home another XFINITY championship for Ford. He has shown over the course of his still young NASCAR career that, given the right team and adequate time, he can perform at a very high level.

When Wallace raced full-time in the Camping World Truck Series, he showed a lot of that potential. He ran at the front of the pack quite often in 2013 and won his first race late in the season at Martinsville, but that first year was plagued by inconsistency and some rookie mistakes. In his second season, Wallace came back much stronger and looked a lot more like a serious championship contender. He won four races and earned nine top 5s and 14 top 10s (versus five and 12 in 2013). He ultimately fell short of winning the title, but the improvement that he showed in two years racing for Kyle Busch Motorsports was what really earned him the reputation as one of NASCAR’s top young prospects.

It is very possible that Wallace’s second season in the XFINITY Series will show a similar improvement. His 2015 season was a lot like 2013. He had generally good results, made some rookie mistakes, and finished in the back half of the top 10 in points. One more year of seat time with Roush Fenway Racing, including a full season with crew chief Seth Barbour, should pay dividends for Wallace.

Additionally, Wallace may benefit from having a smaller team and a little more attention. In 2013, KBM’s resources were stretched pretty thin, fielding three full-time trucks and one full-time XFINITY car. The following year, the team scaled back to two trucks. Wallace was the only full-time driver, and his results improved.

Wallace is not in the exact same situation this year, but he will not be faced with as much intra-team competition as he did in 2015. Last year, RFR fielded four full-time cars, one each for Wallace, Reed, Buescher and Sadler. With only half as many cars this year, Roush’s downsizing may wind up being addition by subtraction.

In short, there should not be a lot of concern in the Ford camp about its championship hopes. Wallace’s 2016 season is off to a rocky start, but he remains one of the favorites to be in the Chase come September. If he has a few wins by then, and he easily could, he will be a major title threat.