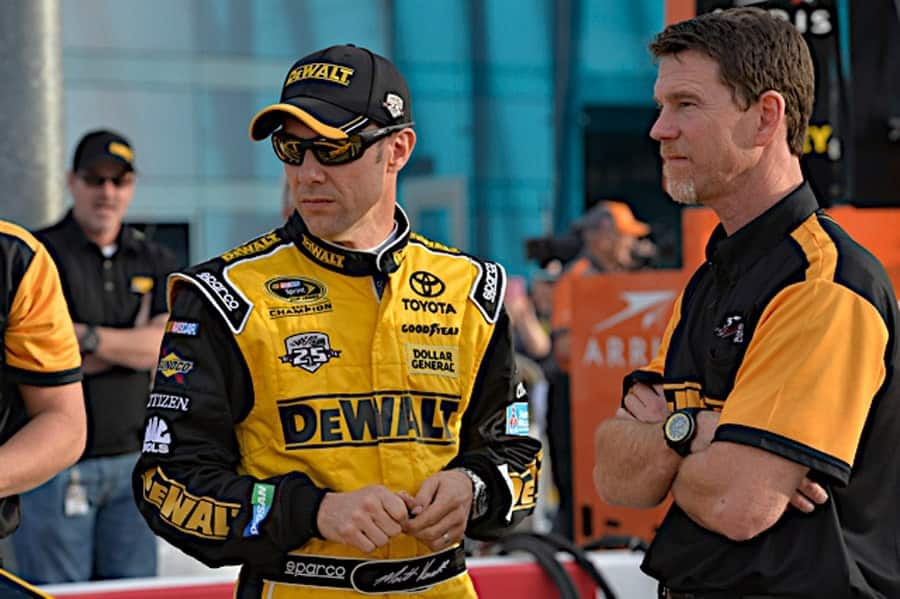 The season is three races old, and the new aero package has been put to the test on two tracks with aged asphalt. Jason Ratcliff, crew chief for Matt Kenseth, has had a car that was capable of contending for the win in all three events. Unfortunately, things have happened in all three events that resulted in only one finish better than 15th: Kenseth’s 14th place at Daytona. With laps led in all three races and strong qualifying efforts, Ratcliff believes they are on the right track.

Heading into this weekend’s race at Phoenix Raceway, the teams have to clean up themselves and their equipment before getting into the action again. Another race with new tires, the new aero package and the elements of the desert are going to test the teams adaptability once again.

This week in Tech Talk, Ratcliff discusses the team’s penalty in Atlanta, the predictability of Phoenix weather and learning about the new tire combinations.

Mike Neff – Starting off the season, it has been a little rough for you. It looked like you were going to win the Daytona 500 and lost it in the last corner. Then you got the weird penalty in Atlanta that knocked you out of contention. This past weekend you were taken out in a wreck. With the current point system, a win will cure all of those ills. How do you feel your system has been evolving outside of those penalties?

Jason Ratcliff – I like the fact that we’ve been able to lead some laps and be competitive. It would be a whole different situation if we weren’t running decently. We’ll eventually get over this, put a few top 5s together and get back into the swing of things. Once we get our momentum going in the right direction we’ll be fine. I’m not overly concerned about it. We just need to keep doing what we’re doing over the last three races and it will all come together. It is unfortunate to start a season with so many missed opportunities and finding ourselves in a bad position, but it could be a lot worse. We could be running 25th every week. We’ll be fine, we just have to stay the course and keep positive and we’ll get headed in the right direction.

Neff – To bring up a sore subject, you had the penalty in Atlanta with the gas man and the adjustment wrench. Were you aware of that rule before it happened or was there misunderstanding of how the rule was applied?

Ratcliff – The rule is no different than it was last year. The interpretation of the rule, on their part, has

evidently changed. This is something we, and every team on pit road, have been doing for some time. I don’t know if we’ve just been fortunate that they just hadn’t seen it the way they did at Atlanta or they’ve changed their interpretation. Either way, I hate we were the example for all to see. It is unfortunate, but on our part, we felt like we were abiding by the rule. Not only because we’ve discussed the rule with them a number of times but also because we’ve performed that pit procedure for over a year now. Every year you come out and have a few growing pains, whether it is from new people coming in and seeing things differently or whatever it might be. We’ll learn from it and move on.

Neff – We’re now headed to the Southwest and Phoenix International Raceway. It is a dry heat but it is definitely heat. Is the weather that welcomes you to Phoenix, outside of the 40 mph winds, the same as you were dealing with in Las Vegas, or is it generally different?

Ratcliff – Vegas was unique; I don’t know that I’ve ever been a part of anything like that. There were sandstorms and the wind was blowing so hard at one point that it was raining but the water wasn’t hitting the ground because it was blowing sideways. Coming into Phoenix we kind of know what to expect. It is fairly consistent out here with the weather. You’re going to get a decent, warm day with the sun out. Usually, for us, the warmest part of the weekend is race day. I don’t know that it is going to be the case this weekend or not. Usually it transitions from a cool morning to the hottest time of the afternoon, where the race track changes on you. You kind of know what to expect. I don’t think Phoenix will be anything like what we experienced in Vegas (laughs).

Neff – Are the tires at Phoenix a new tire combination? Since the low downforce package is now in effect it would seem logical to expect it to be different.

Ratcliff – It is a new combination. It is something that was tested out there last fall. They had a Goodyear tire test where they tested both packages. They brought a tire that has a little more grip. Both sides are new I think. It will be different just because the aero package is a little different, but on top of that, any time they change the tire it keeps you on your toes.

Neff – Since NASCAR has the new package, you’re dealing with new tires most every weekend. Is that something that you rely a lot on your practice time to understand the characteristics of the tire, or does Goodyear provide you with data it’s gathered through the test process?

Ratcliff – Yes and no. We do test the tire on occasion. Last year we were one of the test teams at Phoenix so we have had a few laps on the tire. Other than that, if you aren’t at the test, there is some lab testing done on the tires by Goodyear, and that data is given to each team. Sometimes that data is very helpful and sometimes it isn’t, for whatever reason. It is tough to go into a laboratory, in a controlled environment, and test what you’ll have on a 90 degree day in Phoenix. You take what you can from it and it is better than nothing. Any time they change the tire, even if you’re one of the test teams that gets track time with it, it is always new. You just have to be prepared to go through the different camber and toe settings and try and learn something. Usually the tire data at least gives you a direction.

Neff – With two races with the new package, is it behaving the way you thought it would after your exposure to it at Kentucky and Darlington last year?

Ratcliff – Yeah, I think so. It is less grip. It is exactly what you’d expect it to be. The thing that has been surprising is that it isn’t necessarily reacting in traffic the way we thought it would. In Atlanta I thought it did, I thought it was everything we expected, but in Vegas I didn’t think so. It just goes to show us again, how big a factor the track surface and the tire has. It is still over half of the game. Aero is having an effect but I think it is going to be much larger at some tracks over others, just because of the surface and the tire they bring. So far it has been what we thought it would be.

Neff – Different crew chiefs have given different numbers. Some of it may be smoke and mirrors and some may be legitimate. The estimate was that we were losing about 25 percent of the downforce from last year’s package with this new one. Some teams are claiming to have regained anywhere from 5 to 20 percent. Do you feel like you’ve regained more or less than half of the downforce you lost from last year?

Ratcliff – If we’ve gained anything back it is a small percentage compared to the amount we lost. I don’t know if that 25 percent loss number is exactly accurate. I can’t tell you off of the top of my head but it was significant. I would think it was at least that and maybe more than that. Gaining it back? I don’t know. If guys have found 5 percent of it back, good for them (laughs). We better get to work. You know, we’re definitely making progress every week. It is hard to find 5 percent here and 5 percent there. That is a pretty hefty chore. We’ll keep pushing at it, that’s for sure.

Neff – One thing you deal with in Vegas and Phoenix, that you don’t have too much at any of the other tracks on the schedule, is sand that seems to get on the track constantly. How much of a challenge does the sand on the track at the beginning of the race pose to you?

Ratcliff – The track, at different points of the weekend, is pretty dirty. For instance, if we’re one of the first cars on the track on Saturday, depending on what happened on Friday night, you’ll see a pretty big lap time change from the start of practice to the 15-minute point. Some of that is just laying down rubber and some of it is just getting the track cleaned up. You see a lot of that but I don’t think you’ll see anything like last week. Last week was unbelievable how much sand was flying around out there. Out here in the desert you’ll get that occasionally.

Neff – Does the sand pose a problem with the mechanical devices and electronic equipment that you have to use to support the race effort?

Ratcliff – Oh, it sure did. When I got home that night I had to take three showers to get it all off of me. I was digging stuff out of my ears, it felt like it was two inches deep. I’m sure, when we get to Phoenix, some of these parts and equipment that we put up form Vegas, we’re going to take the covers off in Phoenix and have to spend a few hours getting them cleaned up so they’ll function properly.

Neff – It is always a challenge, especially late in the race at Phoenix, when the sun is going down. What do you do, as a team, to try and minimize that? Do you use duct tape on the windshield? Do you use tinted visors, or is it a combination?

Ratcliff – Yeah, a little of both. Phoenix is one of the more difficult places where we fight that. Just try and get that tape down the windshield as far as we can. Matt uses the darkest visor he can stand. When you get it going down the front straight you can barely see, and you get into the shade when you get far enough into one that it goes behind the stands, and it gets dark. It is pretty tough going from not being able to see anything to having to lift your visor so you can see due to the darkness. It is one of the tracks where it is most difficult to deal with from the start to the finish. You do everything you can to fight it. We’ll even fight it a little during qualifying.