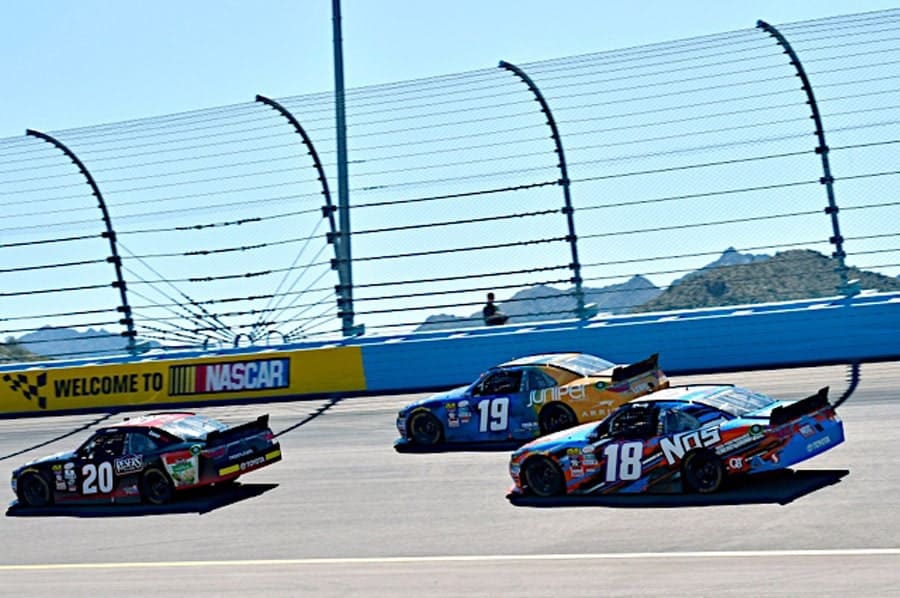 Sprint Cup: Young & Hungry – We are starting to witness a pattern in the Sprint Cup Series: The young drivers are here to race.

The three men in particular are Austin Dillon, Chase Elliott and Ryan Blaney as each of them scored a top-10 result Sunday at Phoenix International Raceway.

If Sunday was your first Sprint Cup Series race, do not mistake these as one-hit runs. In fact, do not forget them as it has become a weekly pattern all season thus far. For Dillon, the Richard Childress Racing driver has far outweighed his teammates in regards to pace, earning

three top 10s in the first four races this season – the other finish being an 11th at Atlanta.

Blaney has proudly, yet quietly, put the Wood Brothers back into legit contention on the Sprint Cup Series step as he backs up his sixth-place Las Vegas outing with a 10th at Phoenix.

Elliott came into 2016 with more pressure to perform than anybody, and he has not faltered. Despite two accidents resulting in non-finishes – both occurring during potential top-5 runs – he has now earned two top-10 finishes this year at Atlanta and Phoenix.

Speed is one thing, but to see three young drivers showing the more important pace week-in and week-out, this could prove to become the biggest story in these opening months of 2016. The next question is: When they will win. – Zach Catanzareti

After taking over a year off from the Verizon IndyCar Series, Mikhail Aleshin rattled off his first top-five finish since the second Grand Prix of Houston on June 29, 2014.

Starting 17th, Aleshin required a consistent effort to rise through the field. The Schmidt Peterson Motorsports driver’s fifth-place result was second only to Ryan Hunter-Reay’s third-place run for Honda, and was his highest non-podium finish to date. – Aaron Bearden

XFINITY: Can Joe Gibbs Racing keep their Speed Up?

Through the first four races of the XFINITY Series season, Joe Gibbs Racing has been on a roll. Kyle Busch has won three races in a row, but teammates Erik Jones and Daniel Suarez have flexed a lot of muscle on race weekends as well. JGR has the hot hand right now, and Jones and Suarez have become championship favorites. But could JGR be peaking too early?

Real proud of the effort by everybody on the @NosEnergyDrink team. ??? Race Recap: https://t.co/MUOF7NNZI4 pic.twitter.com/1ZiNgZGzgD

Remember that this is the first season that the XFINITY Series will use an elimination-style Chase to determine its champion. One thing that has become clear in Sprint Cup Series competition is that the newest format of the Chase favors drivers who run well at the end of the year. Recall that at this time last year, there were a handful of Chevrolet drivers who looked untouchable, namely Jimmie Johnson, Kevin Harvick, Martin Truex, Jr. and Kurt Busch. It was not until later in the year that the younger Busch, Matt Kenseth and Joey Logano really emerged as title contenders when the Chase began.

Something similar could easily happen in the XFINITY Series. JGR may be strong right now, but sooner or later, the rest of the field is going to catch up. When that happens, we should start seeing an elevated level of competition, and hopefully, XFINITY Series regulars will be in victory lane. – Bryan Gable

Sports Cars: Michael Lewis and Jack Roush, Jr. Sweep Weekend at St. Petersburg
Just one week after the season opener at Circuit of the Americas, the GT, GTA, GT Cup and GTS Classes of Pirelli World Challenge traveled to St. Petersburg to race on the undercard of the season-opening race for the Verizon IndyCar Series. While the races at COTA were quite exciting, the St. Petersburg were rather unexciting.
In GT, Michael Lewis won the pole on Friday morning for Race No. 1, then led flag-to-flag to take his first career victory.  By virtue of setting the fastest lap in Race No. 1, Lewis earned the pole for Race No. 2, held after the Verizon IndyCar Series race on Sunday.  He proceeded to lead that race from flag-to-flag to sweep the weekend.  The real story was that EFFORT Racing was able to get their No. 31 Porsche 911 GT3-R for Patrick Long repaired at Alex Job Racing’s shop and to the track in time for the first race.  Long started from the rear of the GT field with no laps on the car and raced to seventh.  Sunday saw Long run up to a fourth-place finish, an excellent run given the adversity.
GTA had a mere two entries for the weekend, down from six in Austin. Scuderia Corsa’s Martin Fuentes swept the weekend for the second time this year in his Hublot-sponsored Ferrari 458 Italia. GT Cup saw Sloan Urry win both races, but Corey Fergus had the most frightening moment of the weekend when he apparently clipped the inside wall in the esses just past pit-out on Sunday. The hit shot Fergus’ Porsche across the track and into the wall hard near where Jim Fitzgerald crashed fatally in a SCCA Trans-Am Race back in 1987. The wall moved significantly upon impact and the engine was thrown from the car. According to Pirelli World Challenge’s Twitter feed, Fergus is ok, but the crash was quite spectacular and resulted in over half of Race No. 2 being run under yellow.
GTS saw Jack Roush, Jr. win the pole for Race No. 1 on Thursday, then lead flag-to-flag to win his first career GTS race on Friday afternoon, despite the much lighter KTM X-Bow GT4 of Brett Sandberg giving chase. Saturday saw Roush pass Sandberg for the lead and hold off the X-Bow GT4 to sweep the weekend. – Phil Allaway

Less than a month from his 16th birthday, Dippel rose to the top spot on lap 30 and held the field off on two late restarts to claim the decisive victory, beating out pole-sitter Spencer Davis, with Jesse Little, Austin Theriault and Kaz Grala rounding out the top five.

Rookie Dominique Van Wieringen also made a name for herself in the event, setting KNPSE records for best qualifying performance (second) and most laps led (29) by a female competitor. The Rette Jones Racing competitor put together a solid race, but was relegated to a 20th-place finish by a late spin.

The KNPSE will return to action on Mar. 26, when the field heads to Greenville Pickens Speedway for the Kevin Whitaker Chevrolet 150. – Aaron Bearden