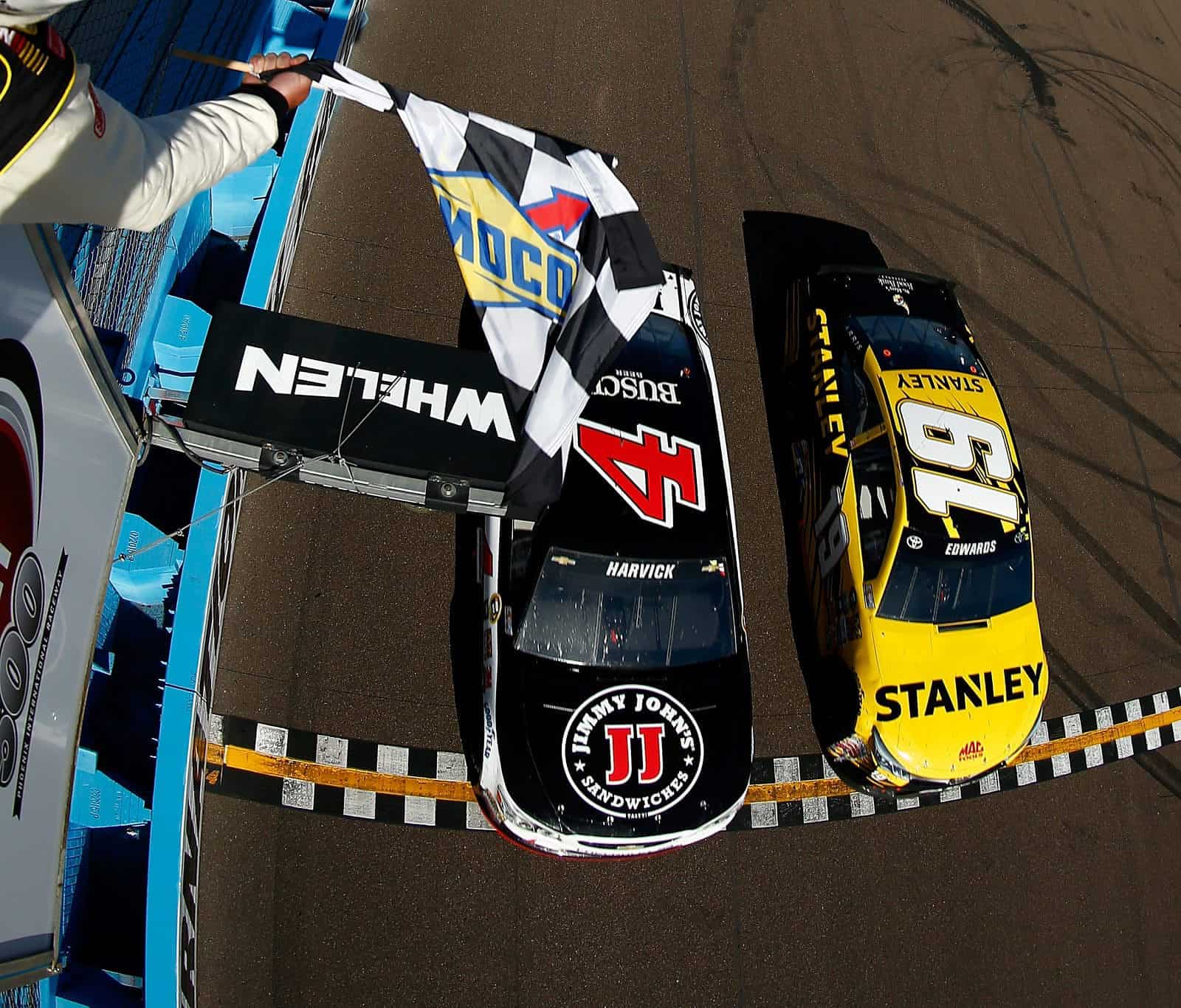 For the second time in four races, the NASCAR Sprint Cup Series set a record for the closest finish at a track. This time, Kevin Harvick outlasted Carl Edwards at Phoenix International Raceway by the same .010-second gap that separated Denny Hamlin and Martin Truex, Jr. in the season-opening Daytona 500.

If you listened closely, behind all of the cheers of the racing fans in attendance, you might just have heard NASCAR executives take a deep sigh of relief.

Look, by no means was Sunday’s Good Sam 500 at Phoenix bad. The race was strategic, and it had more passing than the track has seen in the years since it was reconfigured. However, going into the closing stages, it looked like Phoenix was going to suffer another Harvick-dominated event without much passing or late drama.

Then, by virtue of Kasey Kahne joining a list of teams that suffered right-front tire failures – hello, Richard Childress Racing – with five laps remaining, everything changed.

Suddenly, pit strategy was an issue. Harvick and second-place runner Dale Earnhardt, Jr. had almost no choice but to stay out. No one had beaten Joe Gibbs Racing off pit road all day, and Edwards and Kyle Busch were committed to pitting from third and fourth, respectively.

No, Harvick and Earnhardt were forced to take a calculated risk by staying out and hoping others joined them.

Luckily for Harvick, one driver did – Austin Dillon. Harvick was able to take advantage of this, take the outside lane on the restart without worrying about the inside lane getting a run, and hold Edwards off by the length of one string of an Arizona tumbleweed.

The finish saved what had been a relatively standard Phoenix race. Without the fear of rain that plagued – and shortened – the fall edition of the 500-kilometer race, Harvick was able to play his usual style into what appeared to be an easy victory in the closing laps.

Throughout the race, drivers had voiced light complaints about being unable to pass. Busch made the most notable grumble when a mistake on pit road dropped him to 17th on-track midway through the event, chiming on his radio to say:

“Has anyone been able to pass all day?”

Busch proved the answer to be yes as he drove back through the field for a fourth-place finish, but his question was one echoed throughout the field.

The issue wasn’t with the new rules package or the tires Goodyear brought to the event. Instead, it was merely another case of Phoenix being Phoenix. Sitting as a predominantly flat one-mile oval, or “roval” as drivers call it for it’s road course-like style, passing has proven difficult regardless of what cars are brought to the track. It’s not for lack of effort by the driver and teams, the track has just proven difficult to maneuver when underneath someone, forcing drivers on the bottom lane to methodically wear their competitor down and wait for them to slip up to get by them.

There was nothing wrong with the race at Phoenix. The track just hadn’t lived up to the hype set by the stellar races at Daytona, Atlanta and Las Vegas before it on the schedule.

That is, until the final restart.

Harvick’s bruising, beating and banging victory over Edwards at the line didn’t only further his legend as the ‘Cactus King’  with his eighth win at Phoenix, but it left a tremendous lasting image that should carry NASCAR’s early-season momentum right on to what’s expected to be a phenomenal race at Auto Club Speedway next weekend.

Sure, there might still be some complaints about the racing from fans this week. The term “aero-push” may be referenced once or twice, and some might chime in irate that them Toy-yoders pushed Junyer from second to fifth in Overtime. But the majority of the buzz this week between Phoenix and California should be positive.

Going into the West Coast Swing, the biggest threat to slow NASCAR’s momentum was Phoenix. However, thanks to a finish close enough to make the snakes on Rattlesnake Hill shake their heads in disbelief, the series continues on undeterred to what’s been one of the best races on the schedule in recent years.

Sure, the racing might not have been the most exciting along the way, but the finish was exhilarating, and that’s all that we’ll remember when we look back at this race further down the road.