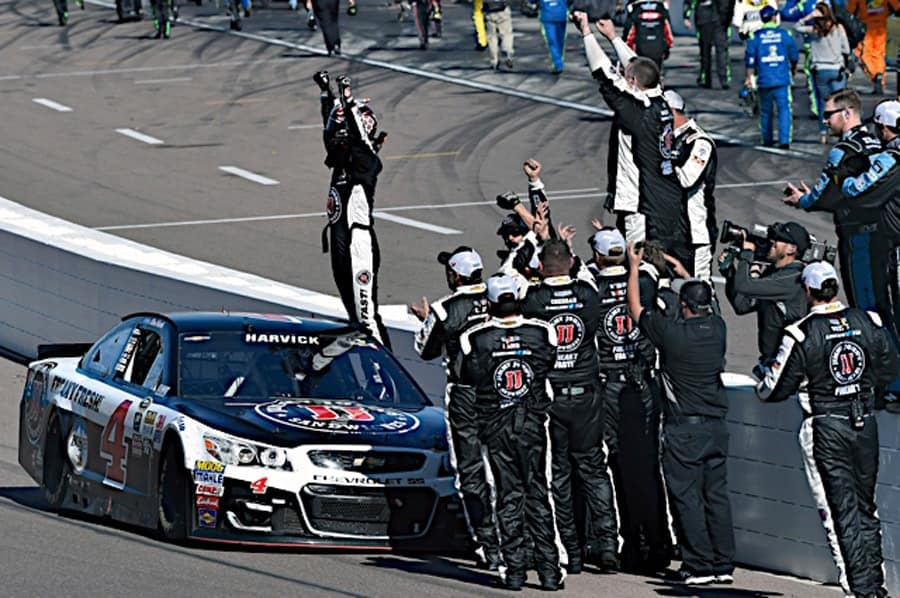 Racing at NASCAR’s highest level takes both talent and equipment.  A good driver in a not-so-good car will generally struggle, and that’s something a lot of drivers face every week, even those who race for the sport’s best-funded teams fight their equipment at times. One test of a driver is whether he can do more than expected with his car, and that’s exactly what Matt DiBenedetto did on Sunday.

DiBenedetto’s BK Racing team has been working tirelessly to improve their equipment, and an influx of cars from the now-defunct Michael Waltrip Racing has made a difference, as has the addition of veteran David Ragan. But DiBenedetto showed his considerable talent on Sunday, giving BK Racing its first top-20 finish at a non-restrictor-plate track since Oct. 2014 at Martinsville with Cole Whitt. DiBenedetto drove like a veteran and led his team to its strongest finish in years. That’s a good day no matter how you slice it.

Phoenix was a new test of the 2016 low-downforce package, and it passed with flying colors on the flat mile oval. The racing is the closest it has been to the boom years of the late 1990s, and it’s allowing teams to really show their mettle at different tracks. Will the improved racing start a new boom for the sport? And if it does, what kind of fan will it bring?

The fans who came to the sport in the early 2000s are a different breed than previous generations of fans, even the ones who did stick around after NASCAR was no longer the cool thing at the water cooler. The new breed of fan lapped up the gimmicks NASCAR was feeding them and asked for more.

Will the improved racing with a throwback feel bring back a generation of fans who felt shunned by the new NASCAR? Or will it bring a wave of viewers seeking for a neatly packaged sport like some others have become? The future is looking brighter than ever, but will the past be all but erased on the upturn of the tide?

Kyle Busch was easily in control early on, and it looked as if he was on his way to an easy weekend sweep with a strong car. But after he lost the lead to Dale Earnhardt, Jr. on Lap 75, Busch was able to lead just one more lap and was never able to make a race of it for the win.  He still finished fourth, making his weekend average finish a solid 2.5, so it’s not like he faded out of the picture. He just didn’t have the best car when it counted.

Kevin Harvick, on the other hand, certainly ran OK early and cracked the top 10 by Lap 40 after starting 18th, but didn’t have that winning look until later in the game. Once he got the lead, it was typical Harvick at Phoenix, and already the track’s winningest driver, added to his total with win number eight.

Phoenix isn’t a particularly long race at just over 300 miles, but it is a difficult one. The track isn’t quite like any other on the schedule, and it can be hard to get a car to handle at the flat one-miler. There weren’t any big incidents, but several teams faced little issues that ruined their days.

Both Ryan Newman and teammate Paul Menard suffered right front tire failures from a melted bead. Ricky Stenhouse, Jr. suffered a similar failure of the same tire. Brad Keselowski blew his right-rear tire later in the race. Casey Mears’ car lost all power mid-run and while it resolved once, it didn’t the second time and required several laps behind the wall to fix a loose wire.

Engine gremlins sent Cole Whitt’s team packing early. Kasey Kahne’s tire failure changed the complexion of the race with just five laps to go. With that exception, perhaps, none of the issues were a game-changer in terms of the entire race. But they will have teams digging through their notebooks when they visit the other flat tracks this season.

There aren’t many worse sights in racing than being the leader on a very late caution and watching nearly the entire field peel off to pit road for fresh rubber while you stay out. That was Harvick’s view Sunday as he and Earnhardt stayed on track while everyone else hit the pits, and only his tenaciousness and a good restart on old tires kept the No. 4 car in front when he and Edwards crossed the line.

Simply put, Edwards ran out of real estate on the final lap of the race. Harvick could not have held his charging rival off for another few yards, let alone another circuit. The two put on quite a show—Edwards shoved the blocking Harvick up the track and gave him a little side slam coming by for good measure.  Harvick countered with a body slam of his own, and that was enough to keep Edwards behind him to the checkered flag in the closes finish Phoenix has ever seen.

Wood Brothers Racing; Ryan Blaney: Remember, this team is racing on tracks they have not visited regularly in years and are outrunning a whole lot of teams who have. Some of that’s due to strong ties with Team Penske. But a lot of credit goes to the very talented Blaney and the team for making it very clear that they’re here to play every week.  They’re looking a little like Furniture Row Racing looked early last year, and we all know how that story ended.

JTG Daugherty Racing; AJ Allmendinger: This team kicks off another strong seasonwith another top-20 run.  They’re capable of this type of finish every week, though competition is fierce for 15th-20th on a weekly basis. It’s likely that they’ll need a win to make the Chase unless they steu up another notch, but they are capable of winning, especially at the road courses where Allmendinger is stellar.  Regardless, they’re off to a strong start to 2016.

BK Racing; Matt DiBenedetto: Eventually, DiBenedetto’s considerable talent was going to shine through, and it did this weekend.  DiBenedetto qualified a strong 23rd and used good strategy to stay on the lead lap Sunday, besting most of his small-team peers and a lot of bigger teams, too. Teammate David Ragan had a strong run as well, and the team left Phoenix looking better than it has in a long time.  Is this they year they com into their own?

A great finish should not be confused with a great race.

It was a 1000 foot race. Courtney Force would be proud.

I enjoyed the racing all day long, but I don’t judge a race only by the action up front. There was lots of racing in the pack throughout–I enjoy that. A good battle is a good battle, whether it’s for first or 31st, so I found it enjoyable. I thought Atlanta was better (probably because I was there and saw all of the action that TV never shows us) but Phoenix had some great racing for most of the day. I’m wondering what people are wanting/comparing the racing to, because what i’ve seen has rivaled the days people claim to want it to be like. The big difference? Back in the day, TV coverage had fewer tight shots of a few cars and more wide ones of the whole pack, and more of the racing throughout the field. The racing is much improved so far this season; unfortunately, the television coverage of it is not.

For those of us not at the race, we can only go by what the tv shows us. And, the tv showed us a rather hum-drum race until it came to the finish.

Right on. I feel like too many people are confusing bad coverage for a bad race. NASCAR is doing its part; FOX isn’t.

It is past time for NASCAR to go to Fox and the other broadcast partners and insist that they show the race w/o all the tight shots. If NASCAR really wants to bring fans back, the first step is showing them that the racing is worth seeing and that starts with TV because people already have that in their house.

another step would be muting DW & his brother Mikey.