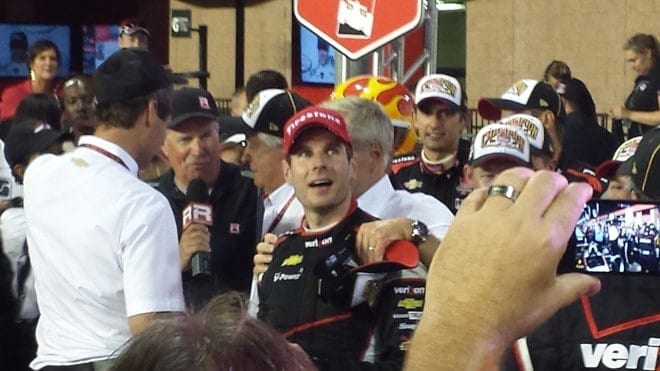 On Sunday morning, Team Penske announced that Will Power will sit out today’s Honda Grand Prix of St. Petersburg, the season opener for the Verizon IndyCar Series.  According to a previous press release, Power has been suffering from nausea.  In addition, the Associated Press’ Jenna Fryer tweeted that Power came to St. Petersburg already feeling under the weather.

Penske tells me they are unsure if nausea is related to Friday crash because Power had "inner ear issues" when he arrived in St. Pete.

Veteran racer Oriol Servia has been tapped to drive in place of Power in the race.  As a result of the driver change, Servia will have to start the race from the rear of the field.

Team Penske President Tim Cindric is disappointed to have to make the move, but understands that it was necessary.

“Obviously this is a very difficult decision to make in the first race of the season, but Will’s health and safety is the most important thing to consider,” Cindric said in a press release.  “We hope Will makes a speedy recovery and with Oriol’s professionalism and experience, we know he’ll do a solid job for our team.”

The 41-year old Servia has five previous starts on the 1.8 mile street course.  One of those was the inaugural open wheeled race in 2003, which was run as part of Bridgestone Presents the Champ Car World Series presented by Ford (the renamed CART).  The other four were in the Verizon IndyCar Series.  In those five starts, Servia has two top 10 finishes with a best of seventh in 2008.

Servia will not go into the race without seat time.  To give Power a chance to try to relax and rest up for this afternoon’s race, the team put Servia in Power’s No. 12 Verizon-sponsored Dallara/Chevrolet during the 30-minute warm-up session earlier today.  Servia turned in the ninth quickest time in the session.

Does he a receive a Chase exemption? Oh wait, I forgot the whole season matters in IndyCar.