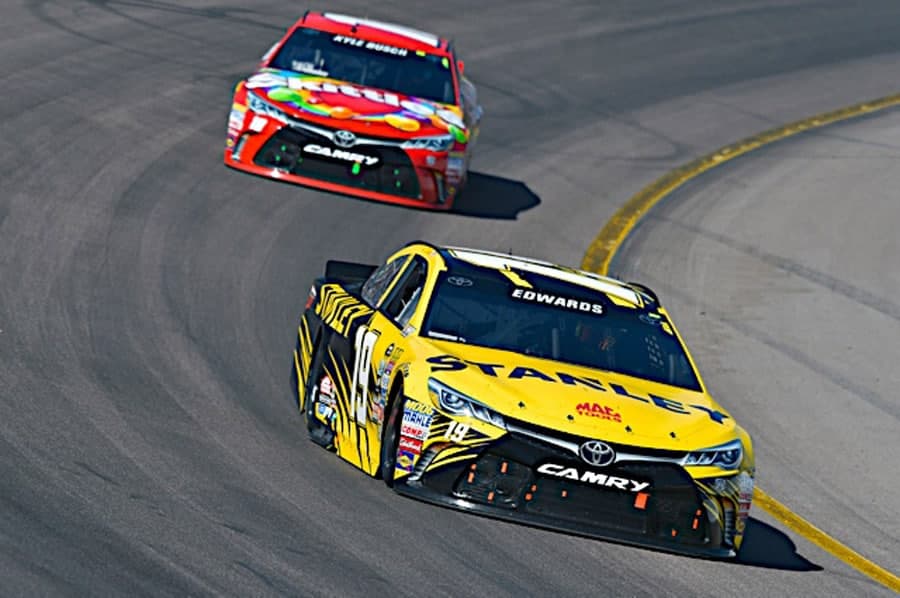 It’s evident every time there is a new rules package that comes into NASCAR that some teams will hit on the setup immediately and others will take longer to figure it out.

Heading into the 2016 season, everyone knew that with the lower downforce package, that reality was very possible. We are three races into the new rules package and so far some teams have hit on it while others have struggled to find a foothold.

Joe Gibbs Racing is one organization that has hit the nail on the head with the new rules package. Denny Hamlin won the Daytona 500 (although Daytona used the same rules from 2015) and three of their four cars are in the top six in points after four races. At Phoenix, all four JGR cars qualified in the top six.

The eye test shows you that JGR has been the fastest organization early in the season. Kyle Busch has started the season with four straight top-five finishes, one of only eight drivers have done that since 1990. Also, Martin Truex, Jr., whose team has a strong association with JGR, is having a solid start to the season. He currently sits ninth in the standings. JGR has picked up from where they left off last season without a hitch.

Hendrick Motorsports is another team that has found their way with the new package. Jimmie Johnson locked himself into the Chase with an impressive victory at Altanta Motor Speedway. Teammate Dale Earnhardt, Jr. sits tenth in points and has run better than he’s finished. Kasey Kahne is 14th in the standings and Chase Elliott is 21st, although much like his teammate Earnhardt, Elliott has run better than his results show. All four HMS cars have been fast this season and have shown signs of running up front consistently.

Another team that has run well has been Team Penske. The organization had their hands full at Atlanta but rebounded nicely since, including a win for Brad Keselowski at Las Vegas. Joey Logano sits seventh in the standings after including a runner-up finish at Las Vegas and rookie Ryan Blaney has been really impressive so far.

Blaney runs for the Wood Brothers who have a close association with Team Penske. He is currently an impressive 12th in points, right behind Keselowski in 11th. Everything seems to be getting in order a little bit for Team Penske and if things can go right all three cars mentioned will make the Chase in 2016.

There was a lot of optimism coming into the 2016 season for Chip Ganassi Racing with Felix Sabtates.

Talented young driver Kyle Larson was paired with a new crew chief, Chad Johnston, and Jamie McMurray’s team was fresh off a Chase birth for the first time in his career. The team also added former co-owner of Michael Waltrip Racing, Rob Kauffman, to their organization over the winter, giving them added financial structure. However, things have not gone well for the team early on.

While McMurray currently sits 15th in the point standings, which would qualify him for a Chase birth, his best finish this season is 16th. Larson hasn’t been much better with just one top-10 finish in the first four races and a 17th place points standing. Both drivers have yet to lead a lap in 2016 and have struggled for speed in the three races since Daytona.

The same can be said for HScott Motorsports, a team that looked to have a lot going for it heading into the 2016 season. They added veteran driver and eight-time Cup winner Clint Bowyer to their roster and with that came an increased association with Stewart-Haas Racing. Even though Bowyer is in a one-year deal with the team fans expected some improvement from the team in 2016.

Unfortunately, that doesn’t appear to be happening. The No. 15 car has not lived up to expectations, recording just one top-25 finish in the first four races of 2016 He sits a shocking 34th in the point standings, while teammate Michael Annett sits 32nd in points in his second year with the organization. It’s been a struggle for a team many thought would make gains in 2016.

Along with both Chip Ganassi Racing and HScott, Richard Childress Racing is fighting for a foothold in 2016. While Austin Dillon‘s stellar start has been a pleasant surprise for the team, the rest of the organization has not had similar success. Ryan Newman sits a disappointing 25th in the standings ,with Paul Menard behind him in 26th. Two RCR-affiliated cars are also looking for success with Casey Mears in 27th  with Germain Racing and Michael McDowell currently 30th for Circle Sport Leavine Family Racing.

The team lost an affiliation with Furniture Row Racing at the end of last season, and one has to wonder if that has had any effect. You also have to wonder if Dillon’s car is an outlier in a team that is a tick off the pace, or if the rest of the organization will find what the No. 3 car has found and begin to improve. Only time will tell.

As the year goes on, teams will continue to work on the rule package. It will be interesting to see if some teams who have struggled early on will find their way and start performing a little better.