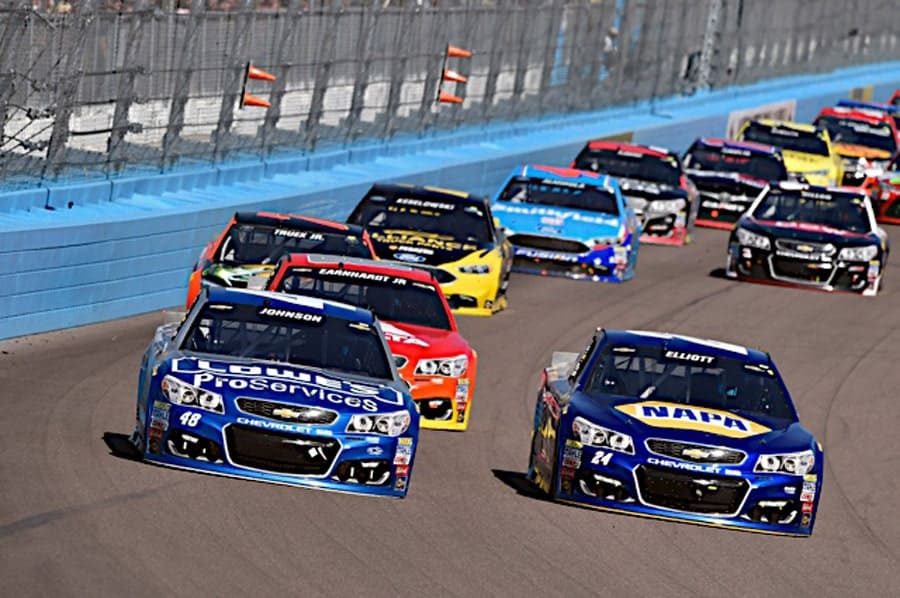 It has been a great first four races for Austin Dillon in his third full year of top-echelon competition. To date, Dillon has secured a ninth-place finish in the season opener at Daytona International Speedway, an 11th-place run at Atlanta Motor Speedway, his first top 5 of the year (fifth place) at Las Vegas Motor Speedway and then another top-10 effort – ninth place at Phoenix International Raceway. His average finish at this nascent stage of the season is 8.5, a whopping ten places better than his 19.4 career average finish. And if he continues at this rate, he will eviscerate his best full season record from last year when he picked up one top-5 run and just five top-10 finishes all season long. In fact, in his Cup career to date, he’s only managed 12 total top-10’s, so this start is extremely encouraging. One of the factors contributing to his on-track improvement may just be his relationship with crew chief Slugger Labbe who took over head wrench duties for the Sonoma race last season. “Slugger is really good at being blunt with things and I’ve learned to be able to take it, and he can take it, too,” notes Dillon. “That is what I love about him. I can tell him right to his face, ‘Hey this is no good.’ He will go to work on it. Same with me, if he thinks I’m not driving right, I will go to work, too. The real question is can they sustain this good one over another 32 races or is this just a “blip”? The work is paying off we just have to keep plugging along and never stop working,” said Dillon. Whatever happens this year what we do know for sure is the man driving the most famous number in NASCAR isn’t going to give up trying to get to where he needs to go.

On the opposite end of the spectrum to Austin Dillon is the amiable veteran Clint Bowyer, who has struggled through a miserable start to 2016. He picked up a 34th-place run at Daytona, finished 35th at Atlanta, had a season high run at Las Vegas ending up 22nd before last Sunday’s 31st place at Phoenix. All told, of the drivers who have competed in all four races so far, only Chris Buescher has had worse results (and that by just two points.) 2016 was always going to be a tricky season for Bowyer with his one-year deal with the minnow team of HScott Motorsports, now in their fourth year of operations, as he waits for the #14 ride of Tony Stewart at Stewart Haas Racing in 2017. “It’s going to be all about using those resources and alliances,” Bowyer said during a pre-season interview with the Charlotte Observer. “If I can do that and get my foot in the door, be an asset to them, I think we can even get more in return. If we fail to be an asset to them, I think it’s going to be stagnant and we’re going to have to be doing things the hard way.” And already it looks like it’s going to be the “hard way” for Bowyer in 2016. Let’s hope for Bowyer’s sake that the finishes start trending better sooner rather than later.

The champion might not have the win he craves, and perhaps should have had, but with four races in the books – four races he missed through injury last season – Kyle Busch is off to an excellent start. He followed up his third-place run at Daytona (19 laps led) with another third-place finish at Atlanta (2 laps led), faded late to end up fourth at Last Vegas (38 laps led) before another fourth-place finish at Phoenix (75 laps led) this past weekend. On the NASCAR XFINITY Series side, by contrast, Busch has been perfect winning all three races he has entered while leading an incredible 493 of 563 possible laps. Dominant doesn’t even come close to describing how he has eviscerated the second series field in 2016. After the disappointment of not closing out the Cup win at his home town Las Vegas track, Busch led early at Phoenix, then faded back thanks to a pit road error of his own making when he slid through his marks and ran over his air hose. “We hurt ourselves on pit road,” Busch said post-race to the USA Today. “That got us behind the 8-ball there for a little while. I certainly was really, really mad at myself for doing that. It seemed like a silly mistake, but I guess even the best of us sometimes make those. It makes it look better when you can rebound from those things and we were able to do that.”

Next Up: Auto Club Speedway

Next up, it’s one of my favorite tracks. The ironic part of that being that this was a track that used to have two terrible races and since it has had its slate cut back to one race has been for the most part fantastic to watch. This will be Cup race number 27 at the 2-mile, low banked D-shaped oval. Brad Keselowski won this race last year with a last-lap pass of Kurt Busch. “At the end, we caught some breaks, made the most of the breaks we caught,” was the winner’s accurate post race assessment to NASCAR.com. Jimmie Johnson, perhaps unsurprisingly, is the winningest active driver at the track with five victories. He also has the most top-5s (12) and the most laps led (955), so don’t be surprised to see the #48 Lowe’s Chevy run strong all afternoon long. After the Auto Club Speedway, we’ll have a break for Easter, so enjoy the race this weekend, folks.

And finally, so four races in and it is, in many ways, much the same as we left things off with all the usual suspects dominating at the business end of the races. Denny Hamlin, Jimmie Johnson, Brad Keselowski and Kevin Harvick have picked up wins, and provisional Chase places, Kyle Busch has done everything but win, and the Joe Gibbs Racing Team in general looks like it has picked up where they left off last season. There are a few outliers certainly – Austin Dillon’s good form as mentioned above – while both the serious Rookie of the Year candidates, Chase Elliott and Ryan Blaney have run well to start out their full time Cup careers. It does seem that it is easier to pass but not perhaps as much as we hoped it might be. Still, there’s a long way to go and so far, so not so bad in my opinion whatever the TV viewing numbers say to the contrary.