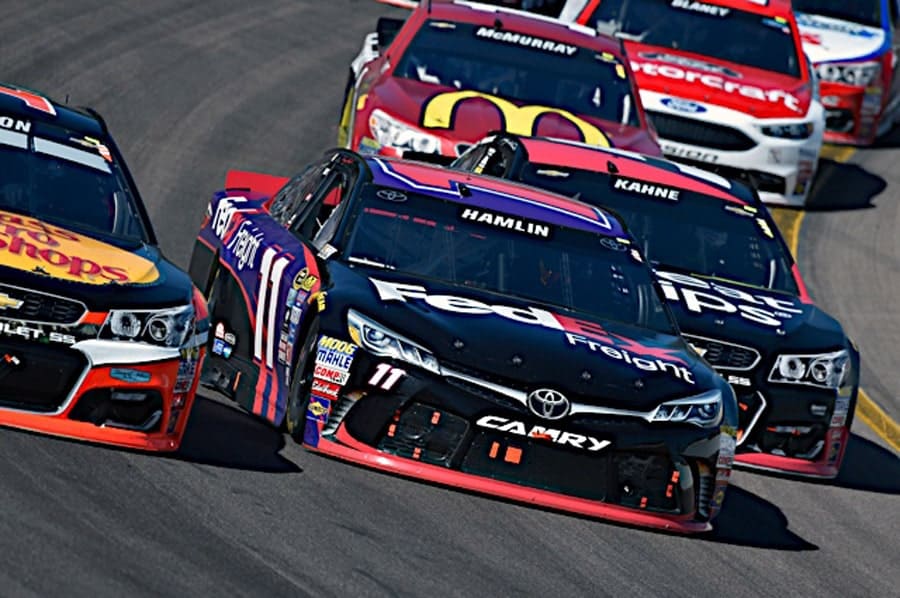 Well, this is a first.

Sunday’s Good Sam 500(k) marked the second photo finish in four races to start 2016, with Kevin Harvick just edging out Carl Edwards to stay atop the throne as the king of Phoenix International Raceway.

Not one to be outdone, our list of Power Rankings voters somehow managed an even crazier feat. The rankings contain not one, but two ties this week. Even better, they’re for the top four spots.

Without further adieu, here are this week’s rankings.

“Hey, he came up short on Sunday but he won the race that really matters to him on Saturday.” – @TheOrangeCone

“It’s amazing what a win will do for you, isn’t it? A victory in the desert gives Harvick the points lead AND a shot at the title.” – Pete McCole, AutoRacing1.com

“JIMMY JOHNS ANNOUNCES ITS “KEVIN HARVICK SPECIAL.” A FOUR-INCH SUB SERVED IN 0.10 SECONDS TO CELEBRATE HIS WIN AT PHOENIX.” – @AnnoyingRaceFan

“Quietly keeping himself right up there in the hunt every week.  A win should be coming up pretty soon.” – Phil Allaway, Frontstretch

“Surprising that he never led on Sunday, but expect him to be strong at Auto Club.” – Ryan Gable, Frontstretch

“Cousin Carl missed a golden opportunity Sunday. The last time he came within an eyelash of the title he did that far too much during the season.” – Mike Neff, Frontstretch

“HIS STEERING WHEEL FINISHED BETTER AT PHOENIX THAN HE DID.” – @AnnoyingRaceFan

“First JJ forgot to latch his steering wheel in, then Will Power forgot to keep his hands on the wheel… Lewis Hamilton better keep eye on his wheel when F1 returns.” – Aaron Bearden, Frontstretch

“Six drivers have more than one top 5 this season. If it weren’t for the horrible finish at Daytona, Junior would be right at the top with the four best right now.” – Neff

“Did you see how fast that car was on Sunday? A victory is right around the corner.” – Albino

“It’s taken Denny three weeks to recover on-track from his Daytona 500 victory, and probably about as long behind the scenes to recover from the hangovers and lack of sleep.” – Bearden

“He recovered well from the pit road penalty, but it took practically the whole race.” – Gable

“Another strong run could mean the RCR team is finally starting to gel around the organization’s future flagship driver.” – @TheOrangeCone

“After 2014’s rookie of the year battle, if I told you that Austin Dillon was more likely to get his first win before Kyle Larson you would’ve been staring at me like I grew a second head.” – Kyle Pokrefky, The Fourth Turn

“Had a spot of bad luck with the fueling issue Sunday.  Had that not happened, he would have claimed another top 10.” – Allaway

“Sounding a little flustered after the race in Phoenix, that will go away once he grabs another trophy.” – Neff

“Subpar day in the desert, but now Kez is heading to the site of his only 2015 win. A second victory could set this team up as a major threat.” – Bearden

“Disappointing run in the desert. The victory in Vegas keeps him in the top 10.” – Albino

Normally, I’d put some sort of clever quote about how these two drivers were “so close” to cracking the top 10. However, after a week like this, two points seems like a mile. Better luck next week, guys.

Martin Truex, Jr. (25 Points, Finished 14th) – “Still hanging in there, but this team’s performance has started to slip a little.” – McCole

Do you agree with our rankings? Think someone got snubbed, or that one of the top drivers is overrated? Let us know in the comments, and tell us what your top 10 would be.