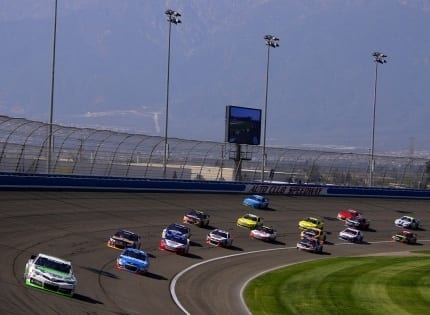 The Sprint Cup Series will again race with a less-than-full field on Sunday in the Auto Club 400 at Auto Club Speedway in California.

Thirty-nine cars are entered for the race, the final race in the West Coast Swing and final race before the Cup drivers take a week off for Easter. There are nine previous winners in the field: Brad Keselowski, Kyle Busch, Kevin Harvick, Jimmie Johnson, Matt Kenseth, Carl Edwards, Kasey Kahne, Greg Biffle and Kurt Busch.

Brian Vickers will return to the No. 14 after taking Phoenix off. He will be sponsored by Janssen’s  Arnie’s Army Charitable Foundation. Vickers will be racing in place of Tony Stewart – his best finish at ACS is third in 2005.

Three Open teams are entered: Ryan Blaney in the No. 21, Josh Wise in the No. 30 and Cole Whitt in the No. 98. All three will make the race due to the short field.

The Sprint Cup cars will take to the track on Friday at 1:30 p.m. EST with qualifying the same day at 7:45. Opening ceremonies for the race will take place at 3:30 p.m. EST on Sunday. Brad Keselowski is the defending race winner.