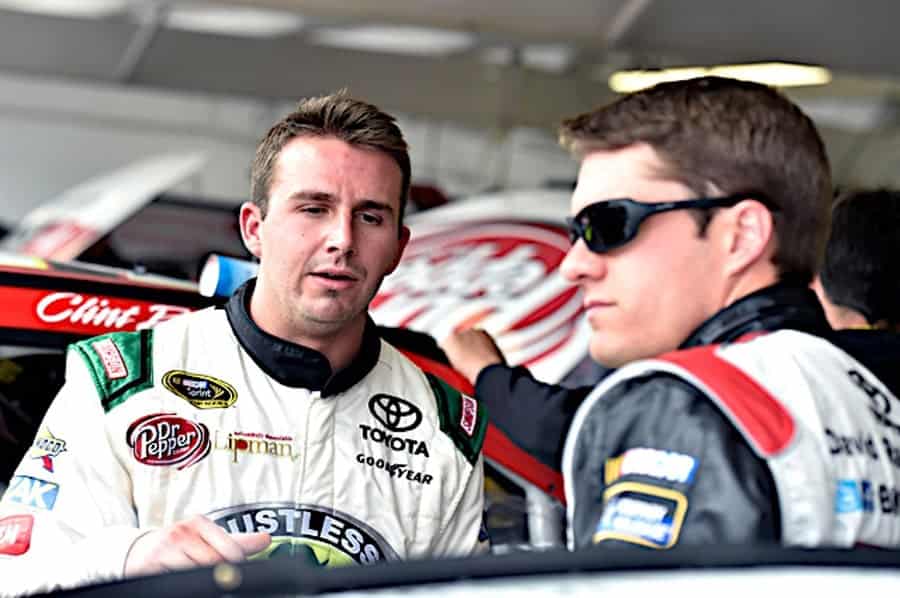 No, they won’t all be like that, but these finishes were pretty spectacular, and the racing through the field hasn’t been too shabby either, with the exception of Daytona. Maybe someday, FOX will see fit to show that part to fans at home…

2. A few new faces peeking into the top spots

A lot has been said about two of this year’s stellar rookie class, Chase Elliott and Ryan Blaney.  Both have run smart, clean, smooth races and have looked wise beyond their years in their cars.  Elliott has the added pressure of filling Jeff Gordon’s seat. Blaney drives for the sport’s oldest team, and doesn’t have a charter to fall back on, but so far neither has allowed the pressure to ruffle a single hair.

Then there’s Austin Dillon, who in his third year in the Cup Series is finally showing some chops. Dillon, too, has the weight of history on his shoulders; he drives the No. 3 that so many fans will forever associate with Hall of Famer Dale Earnhardt, and because he runs for his grandfather’s race team, Dillon has the burden of having to prove it’s more than just nepotism keeping him in the seat. He’s showing for the first time that he just might write a new chapter for that iconic car.

A few tracks have added more SAFER barriers this season, and others have made additional safety improvements. If a track has money to upgrade just one area, it should be safety. On Friday at Phoenix, we got a reminder of just how important safety features are as veteran driver Jimmie Johnson slammed the wall during a qualifying run after his steering wheel came off—a freak occurrence that could have ended so much worse than it did. As it was, Johnson walked away unscathed. There was a time that he might not have, and it’s a good thing that those days are mostly in the past. Safety is an area that nobody, from NASCAR to racetracks to teams and drivers, can ever become complacent in. There’s still room for improvement, but we’ve come a long way in a short time from concrete walls and open-face helmets.

4. Improvement deeper in the field

If fans are tired of the same old, same old, then there’s also reason for optimism as some of the sport’s smaller teams have made gains.  BK Racing made a statement at Phoenix, putting two teams inside the top 25 that hadn’t seen finishes that strong in some time.  Tommy Baldwin Racing and Circle Sport Leavine Family Racing have taken a few steps forward, showing what improved equipment can do as both are running RCR stuff this year. Longer-standing RCR alliances are paying off for JTG-Daugherty Racing, where driver AJ Allmendinger has finished solidly inside the top 20 the last two weeks. Add to that Germain Racing, for whom Casey Mears had a stellar run at Atlanta with lap times that rivaled the leaders late in the race. Will any of these smaller teams crack the Chase? A couple have the potential to sneak in a win, but really, it doesn’t matter. Better competition throughout the field can only be good for the sport, and a few years down the line, you may see one or two of them make a statement as Furniture Row Racing has the last two seasons.

Daytona and Phoenix may have had the best finishes, but the best race of the year in terms of great battles all day long? That distinction goes to Atlanta, a track whose racing surface is one of the more aged in the Cup Series. Coming up Sunday is another track with rough, worn pavement: Auto Club Speedway. ACS was one of the worst tracks on the schedule for years, until its pavement wore in while other tracks were repaving, and suddenly it was hosting some pretty good shows.

Part of the new racing package this season has been tires that wear out, and suddenly tire strategy matters. Teams learned the hard way at Phoenix that tires don’t always last a full fuel run anymore. Tires that lose grip quickly and steadily make much better racing, as Atlanta demonstrated, because teams can bring different strategies into the game. Johnson proved it in winning the race by short-pitting. Tires that wear out about as quickly as Fred Flintstone’s stone-age version did little for strategy as four tires gives little advantage over two, and dropoff rates rarely come into play at most tracks. If the trend holds, Fontana should be quite a show. Who would have ever thought?