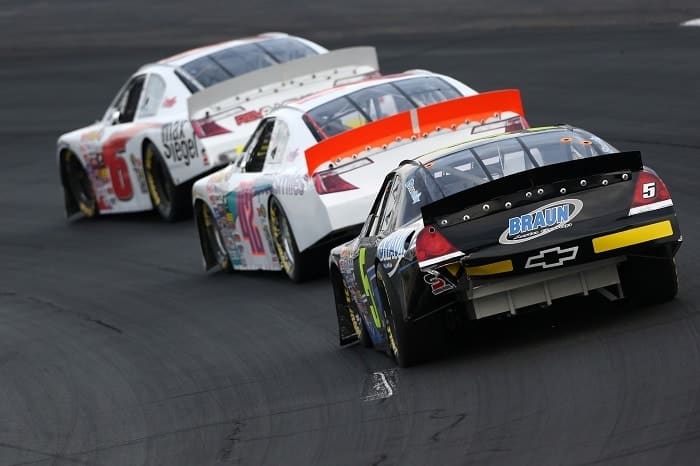 The start of the NASCAR season has been wild to say the least. But in the lower tiers of NASCAR, things are just getting started.

As the K&N Pro Series East finally completed its second event of the year, its young drivers are poised at a title run. Looking to make a name for themselves, the millennials are attempting to help bring in the next generation of racers.

With nearly a dozen drivers under the age of 20 competing for the K&N Pro Series East championship, they are focusing on becoming the next generation of competitors to make their way into the Cup Series. However, a few are already establishing themselves as the favorites. Some are struggling, while others are booming.

But back in the Cup Series, the focal point outside of the track has been on the presidential primaries. Oh yes, politics instead of racing.

After NASCAR Chairman and CEO Brian France endorsed Republican presidential candidate Donald Trump, along with multiple current and former racers, fans were outraged for multiple reasons. While we won’t go into why or why not one should endorse real estate mogul Trump, we will certainly be discussing what an endorsement could do for a campaign that is overwhelmingly taking over the GOP primaries and caucuses.

Q: I saw that the K&N Pro Series East raced this past weekend, but no one really spoke about it on social media. Who is standing out in 2016? – Deborah E., Florida.

A: The K&N Pro Series season is still quite young. The West division hasn’t even started yet, but it begins Sunday at Irwindale Speedway.

There are multiple drivers that have been standing out in the Pro Series East two races into the year. Obviously, the two winners – Todd Gilliland and Tyler Dippel – are ones that have quickly emerged as two of the strongest drivers on the racetrack. However,Gilliland isn’t running the full season in the East. Rather, he is competing full-time in the K&N Pro Series West this year for Bill McAnally Racing.

Spencer Davis is currently the points leader after making the offseason swap from NTS Motorsports to Ranier Racing with MDM. Thus far in 2016, he has a runner-up finish in the season-opener at New Smyrna and at Mobile. The attention he has received early in the year has helped him attract sponsorship from ESPN founder Bill Rasmussen’s newest company, FEVR.

Running up front early in the year, Davis has positioned himself as a championship favorite for the new team. However, Dippel, a dirt track standout from Upstate New York, has been incredibly fast to start the year competing for HScott Motorsports with Justin Marks.

15-year-old Harrison Burton, son of 21-time Sprint Cup Series winner and current NBC analyst Jeff Burton, is also competing full-time for HScott Motorsports this year. With funding for the entire season from DEX Imaging and running for a top-tier team, he is in position to follow the footsteps of former team drivers Ben Rhodes and Rico Abreu, who are competing full-time in the Camping World Truck Series.

Additionally, there are a few other drivers that you should get to know before the 2016 season matures.

Driving for Rev Racing, Garcia comes over to the K&N Pro Series East full-time a year after being crowned the NASCAR Mexico Series champion. Garcia, 20, made three XFINITY Series starts in 2014, with a best finish of 25th in his debut.

The Bassett brothers are back in full force in 2016. Both drivers finished outside of the top 10 in the standings last year. However, Dillon — the younger of the two by about a year and a half — earned the family-owned team its first victory last year at Motordrome Speedway.

But entering his third season, Ronnie has to prove his self-worth in the K&N Pro Series. In 12 races last year, he only finished six on the lead lap. Meanwhile, Dillon did so eight times. However, it’s Ronnie who has had the hot start, sitting fourth in points after a pair of top 10s to start the year.

Grala is an interesting case. After being the youngest driver to compete in this year’s Rolex 24 at Daytona at 17 years old, he is entering his third full stint in the K&N Pro Series East.

Competing for Ben Kennedy Racing, he has funding for a full season once again. The No. 3 team earned nine top 10s last year en route to a seventh-place finish in the championship standings. But this year, Grala has high expectations as he looks to break into the Truck Series sooner rather than later. He has proven that he is a clean driver after completing all but 13 laps last year, but he needs to start leading laps.

The rookie driver has been quite impressive to start the year. Competing for Rette Jones Racing in the No. 30 car, she is already setting records. At Mobile, she became the first female driver to lead more than four laps in a race, in addition to qualifying runner-up.

Moving from the ARCA Series full-time to the K&N Pro Series East, the competition will be tougher for Cornett-Ching in 2016. However, her Race 101 team is up for the challenge. She had five top 10s in ARCA last year, finishing seventh in points. With Dickies coming on board, she finally has the funding to prove what she can do behind the wheel.

Q: With all of these NASCAR drivers and Brian France supporting Donald Trump, what exactly does it accomplish? Is there any point to doing it when he’s so far ahead in the Republican presidential race? – John C., Long Island, New York.

A: As someone that has been following the presidential election very closely, I can tell you that the only thing France’s endorsement does is add a handful of unsure voters to Trump’s tally. If people are following the voices of a leader in sports over their basic morals, they are indeed not making the right vote.

Now, I am not one to judge who you vote for. However, endorsements from sports stars for a president are meaningless.

When retired NASCAR driver Mark Martin took the stage for one of Trump’s rallys in Charlotte, it provided a wave of enthusiasm. Martin’s appearance, along with that of Ryan Newman, David Ragan and the Elliotts in Georgia, was an attempt for Trump to gain supporters of those unsure of who to vote for. Using well-known athletes helps his case, and the addition of unsure voters gives him a slight edge.

Entering the third Super Tuesday of the primaries, Trump was predicted to defeat Sen. Ted Cruz (Tex.) by a hefty margin. As you mentioned, what is the point of making a big deal out of a Trump endorsement by France or anyone else in the NASCAR industry?

Well, when Trump goes around saying that he has NASCAR’s approval, that’s when things got messy. People that do not support Trump in the NASCAR realm have been taken to Twitter with their anger. It has put Mexican driver Daniel Suarez in a tough position, being asked questions by reporters about politics that he continues to show he doesn’t want to speak about.

But as Trump solidifies the Republican nomination week-by-week, these endorsements will be a major key. It is something that former Secretary of State Hillary Clinton will not have on her resume, making Trump appear more credible heading into the presidential election in November.

Brian France has never been accused of being the sharpest knife in the drawer.

The political issue could bite NA$CAR in the financial butt. What happens if Camping World decides to pull out of series sponsorship. What if potential new Cup series title sponsors decide not to take over from Sprint. Are the manufacturers happy with this message? What about all the individual sponsors that may have a differing viewpoint? May Brian France choke on it.

Will The Donald back Brian’s run for president?