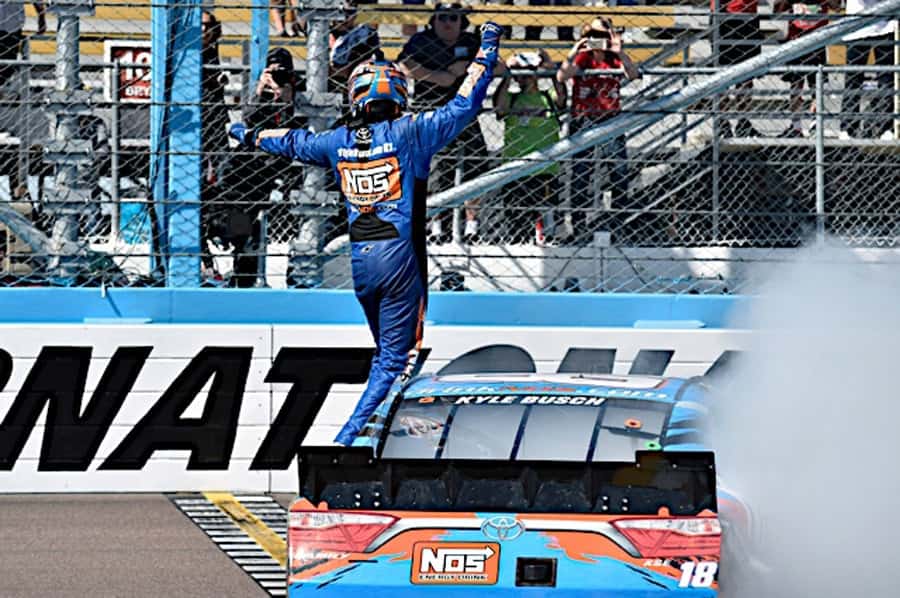 Did You Notice?… Kyle Busch‘s NASCAR XFINITY Series dominance? Well, sure, you probably have, even if you haven’t actually watched any of the races, since it’s been quite the topic across social media, NASCAR forums and elsewhere. In three 2016 starts, all coming in the last three races, Busch is batting 1,000, relinquishing Victory Lane only at Daytona International Speedway, simply because he wasn’t in the field.

Surprising? Not too much so. After all, Joe Gibbs Racing has begun the 2016 season on a tear, and not just in the XFINITY Series. While Busch has won three races and Daniel Suarez leads the series points, the team has also started strong in the Sprint Cup Series, owing in part to Denny Hamlin‘s Daytona 500 win and, pre-Phoenix, the overall points lead for Busch, which has been changed post-Phoenix to co-points leader due to a tie with Kevin Harvick, for which the edge is given to Harvick due to his Phoenix win.

But isn’t this a case of deja vu? Kyle Busch, driver of the No. 18 for Joe Gibbs Racing in NASCAR’s second-tier series, with sponsorship from NOS Energy Drink, visiting Victory Lane more often than not? Your eyes don’t deceive you; you’re recalling 2010, when Busch won 13 times in 29 starts, three of those wins coming with NOS on board (plus an additional three top 5s and four top 10s with the blue-and-orange car). It was all part of a four-year period during which Busch won 40 series races, up until 2012, when he went winless driving for his own team.

Was that era in NASCAR’s supposed feeder series a tough pill to swallow for you? It may be best to change the channel, if you haven’t already. Busch is slated to run the next three XFINITY Series races in the No. 18, finally relinquishing the ride to Matt Tifft once the circuit reaches Richmond International Raceway next month. Until then, have fun trying to fill your Chase bracket in this series. Maybe we’ll get a series regular to win by summer, right? …Right?

Did You Notice?… The Wood brothers’ sudden resurgence? It’s true, Wood Brothers Racing is again a force to be reckoned with in NASCAR. No, it’s not 1960. It’s certainly not 1973. It’s not even the early 2000s. NASCAR’s oldest team currently holds down 12th place in the Sprint Cup Series owner standings, with driver Ryan Blaney in the same position on the driver side. In four races, the team has earned two top-10 finishes, despite its position as one of the non-charter teams in the field each week.

Where did it all come from? After all, the famed No. 21 hasn’t run a full season since 2008, and aside from the oft-spoken-of 2011 Daytona 500 win with Trevor Bayne, has rarely been thought of as a bona fide contender.

It comes down to two major factors: the Team Penske alliance and its driver. Since teaming with Penske last year, the team saw an uptick in results, with Blaney scoring a top 5 and two top 10s in 16 races last season despite three DNQs. Perhaps it wasn’t an unequivocal success, but it was the most races Wood Brothers Racing had attempted (19) since that full-time 2008 season, and Blaney was seeing many tracks for the first time in a Cup car. There were bound to be hiccups, but the equipment was there, more so than in previous years.

And boy, has Blaney responded. Fans have been waiting for Dave Blaney‘s son to tear it up on a full-time basis above the Camping World Truck Series for a while now, and he’s delivered early on, grabbing an early edge in a rookie competition many thought Chase Elliott would dominate. Instead, despite identical top 10 statistics, Blaney sits 12th in points while Elliott is not yet within the top 20.

We’re four races in, so it’d be astonishingly silly to hand the rookie trophy to Blaney and the Woods just because of a few top 10s and early points-paying success. But it is important to note that a formerly part-time team and driver are making strides where team-and-driver combos that have been together for years are faltering. And the best part? One doesn’t get the feeling that they’re overachieving, either.

Did You Notice?… Quick hits before taking off: