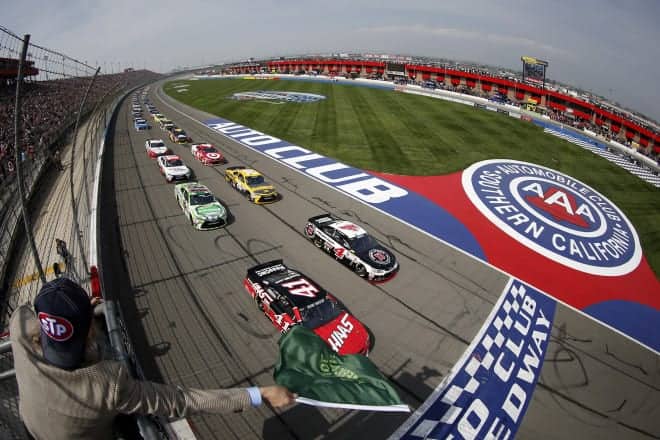 Sprint Cup: Will Auto Club Be the Most Competitive Race of 2016?

If the last three weeks spell any indication for this weekend, it seems like a perfect storm. With the low-downforce package teaming with the bumpy, greasy surface of Auto Club Speedway, the entire sport is sure to see one competitive race on Sunday.

The track itself has flipped upside down in the last six years, shifting from a track where most people wouldn’t go even at gunpoint to a sold-out day of killer racing and a finish full of the unexpected.

The competition of the field in 2016 is one strong reason to not count anybody out of Victory Lane. Four races this year have supplied us with four drivers in four different organizations. Just two years ago, Kyle Busch made a last-lap pass on brother Kurt Busch to take the win, while also completing the 35th lead change of the afternoon, the most in Auto Club’s nearly 20-year history. That finish also began a streak of three consecutive last-lap passes at Auto Club, a streak likely to continue this Sunday.

Clearly, even with recent aero rules, the track can naturally provide that action. With this new package that has even been able to showcase increased competition at tracks like Las Vegas, it’s hard not to oversell this weekend. Tony Gibson, crew chief of Stewart-Haas Racing’s Kurt Busch, expects four-wide racing all day with an emphasis of finding the right groove to make the appropriate passing maneuver. Though I believe four-wide racing all day is a tad blown – then again, he knows a few more things than me – the racing grooves at Auto Club are what can create possibly the year’s best race.

This place was built to supply the drivers with five lanes of racing room. For years, it was a one-lane power house wrapped around the bottom. Now, these cars are so curious that they made a sixth lane which sees cars hug the turn’s grass.

Imagine that: two cars racing each other side by side, separated by four lanes of track. Only in Fontana.

What are the expectations for the Haas Formula 1 Team in Melbourne?

It’s finally here: America will be back on the Formula 1 grid for the first time in 30 years with Haas F1 Team beginning its journey into the largest motorsport on earth.

Going through pre-season testing in Spain, the Gene Haas-owned organization suffered a number of reliability issues, including a brake-by-wire problem. Veteran F1 talent Romain Grosjean says the issues should be resolved, though he and the team expect to “discover more [problems] than other teams” for 2016.

A team starting from scratch is a tough thing to put an expectation label on, especially in F1’s wacky world of technical dependence. With this in mind, it was key for Haas to put two experienced drivers in the seats for the debut season, rather than an American driver in hopes of pleasing the United States fan base.

“We’re not here to prove that we can outthink the big teams,” Haas told Frontstretch in January. “We cannot build cars better than Mercedes, Ferrari, Williams or Red Bull. We wanted to have an experienced Formula 1 driver because of the simple fact [that] we need to have someone that can tell us: Is our car any good?”

Alas, 83-race veteran Grosjean will pilot the team’s No. 8 VF-16 chassis while Mexico native Esteban Gutierrez, who has 38 F1 starts with Sauber F1 Team, will return in the No. 21 following a one-year hiatus.

The team is far from calling its hits for 2016. For Grosjean, to simply have both cars finishing the race would be a success in race No. 1 while scoring a points finish [10th place or higher] would be “unbelievable.”

That’s where my expectations stand. In this series, reliability is incredibly crucial, and with the new factors that will play into 2016 and beyond, it will be a slow multi-year process before wins are expected from Haas F1 Team.

How Will Qualifying Changes Impact the Competition in Formula 1?

Looking at what’s new for F1 for 2016, one of the major points is the 21-race schedule, the largest in the sport’s history. However, when it comes to the weekly competition factors, there are three that are catching headlines: Elimination qualifying, clampdown on radio communications and a third choice of tire for 2016.

The first one is the elimination-style qualifying format, the one many in the F1 world seemed to be having trouble with. Though the sport’s highest drivers and team personalities have spoken out against it – along with a healthy amount of fans – the sport will undergo a revamp of Saturday qualifying.

In recent years, qualifying consisted of the typical knockout format with the field shrinking from 20 positions to 15, then 10, before the pole winner is decided in the fourth and final round – very similar to what NASCAR adapted in 2014. But no more for 2016 as the FIA [International Automobile Federation] hopes to increase Saturday excitement by putting into effect the following format:

– two drivers left in final one minute and 30 seconds

Despite several moments of uncertainty over the past couple months – with an apparent issue raised by Bernie Ecclestone with regards to the proper timing technology, leading to multiple changes in the format’s debut use – it is now officially going to be showcased in Melbourne, Australia, this weekend. And with a threat of rain in Saturday’s forecast, this could be quite the show.

Kyle Busch may have three straight wins in the 2016 XFINITY Series season, but Joe Gibbs Racing’s success stems from more than just his racecar.

Erik Jones and Daniel Suarez have been right behind the 2015 Sprint Cup Series champion, backing up Busch’s wins by placing second and third in the last two races. Additionally, qualifying has been in the team’s control as it has earned a 1-2-3 clean sweep in the last three races.

This has given Suarez the championship lead, while Jones continues to bounce back from a crash in Daytona, currently sitting sixth in points.

With untouchable runs in succession, the question is, when will this end, if at all? This weekend will once again see Busch in the No. 18 Toyota. That automatically spins the conversation to second place and who will best earn points in their route to the inaugural XFINITY Series Chase. But not so fast, said Jones last week. Though Busch won in dominating fashion, Jones was in hot pursuit from pole position and showed some strong will after multiple pit road setbacks in recent weeks this season.

An outside contender that can challenge Busch on Saturday is entirely possible. Kevin Harvick is in the No. 88 JR Motorsports Chevrolet and is the defending Auto Club winner. Kyle Larson won the race in 2014, while Ryan Blaney, Austin Dillon and Justin Allgaier have shown proper pace to grab a win.

By the looks of it, if anybody besides JGR win on Saturday, it will be considered an upset victory. I believe after some time, a number of the above-mentioned teams with rise in speed to better compete against the JGR stable. For now, it’s a high reach.

Brian will try to ensure that it is with a hot dog wrapper caution at the end so he can try out his overtime line.

Look at how far the busch series has fallen when Harvick is considered an “outside contender” to win the busch race. Ridiculous!!

Thanks for the infomercial on West Michigan –err, Fontana. I don’t plan on watching. It’s Palm Sunday…there’s things way more important than what remains of nascar.

Oh, I forgot it was palm Sunday. I better start drinking lots of fluids. :)

I know, poor taste and a sacrilege to boot,,,, but it’s funny.

The Mad Man
Reply to  Bill B