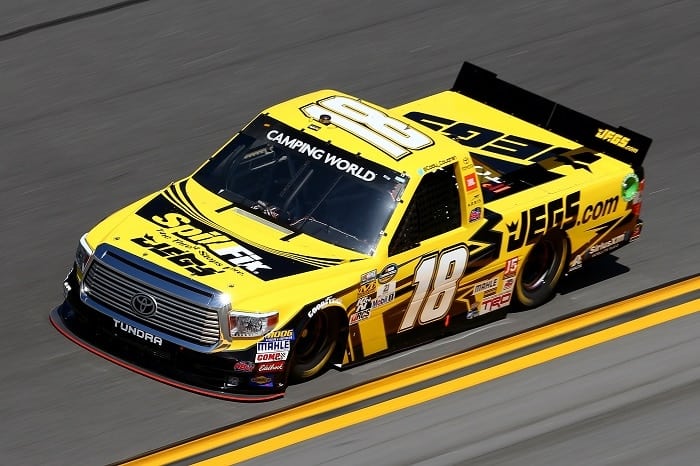 Kyle Busch Motorsports announced Thursday that Harrison Burton, 15, will make his NASCAR touring series debut on Oct. 29 at Martinsville Speedway behind the wheel of the No. 18 truck.

Burton is the son of 21-time Sprint Cup winner Jeff Burton and is currently running for rookie of the year honors in the NASCAR K&N Pro Series East.

While running the full schedule in the Pro Series East, he will also be competing in a limited basis for his family-owned and -operated late model team.

“I am proud to have Konica Minolta join our DEX Imaging team for my Truck Series debut with Kyle Busch Motorsports,” Burton said in a team press release. “It means a lot to have these sponsors onboard for the next step in my racing career and making it possible for me to be able to race for the marquee team in the series. It’s a big step, but we have been working really hard to prepare ourselves for everything that’s to come this year and we’re ready.”

By NASCAR rules, Burton is unable to compete in a touring event until his 16th birthday, which happens to fall in October. He will add to the second generation of Burtons in NASCAR, joining his cousin Jeb Burton, who currently races in the XFINITY Series for Richard Petty Motorsports.

““Harrison is mature beyond his age on the track and it’s impressive the resume he has already put together at the age of 15,” team owner Kyle Busch said. “He comes from a racing family and doesn’t have to look very far to find a role model that can show him what it takes to be successful both on and off the track. We’ve been fortunate the last few seasons to get KBM to the point where we can provide young drivers an opportunity to grow in the sport and we’re excited to be a part of Harrison’s continued development.”