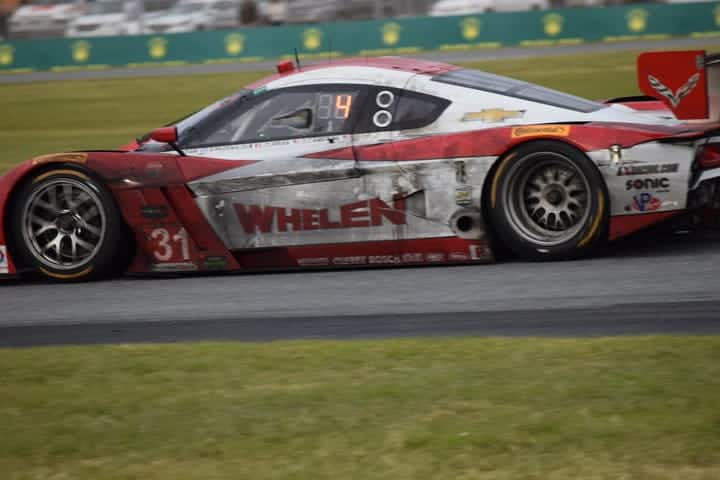 On Thursday, fairly hot weather greeted the 49 IMSA WeatherTech SportsCar Championship teams entered in Saturday’s Mobil 1 12 Hours of Sebring as practice got underway.  Temperatures nearly 90 degrees curbed lap times to a certain extent.  In the morning and at night, it was possible to put down some good times, though.

In the morning session, Action Express Racing‘s Dane Cameron turned in the fastest lap of the opening session with a lap of 1:52.447 (119.736 mph) halfway through the session.  That lap was more than three-quarters of a second faster than Scott Pruett in the second Action Express entry.  Johannes van Overbeek was third quickest in the Tequila Patron ESM Ligier JS P2-HPD.

In the heat of the day, Action Express Racing continued to hold their advantage as Christian Fittipaldi was fastest, but almost 1.5 seconds slower than Cameron’s time in the morning.  The nighttime session saw Filipe Albuquerque lead in the No. 5, but Cameron’s time from the morning held up to be the quickest lap of the day.

The day was not completely clean.  Katherine Legge stopped the DeltaWing on-course to bring out a brief red flag in the morning.  17 minutes into the night practice, John Pew crashed the No. 60 Michael Shank Racing with Curb-Agajanian entry in turn 7.

PR -will be a late night but the guys will make repairs and we will practice & qualify tmrw with @olivierpla pic.twitter.com/wxmDMuknW1

Pew was checked and released from the Infield Care Center.  As can be seen in the tweet, the team put in some late hours repairing their Ligier JS P2.  They were successful and Olivier Pla will qualify the car this afternoon.

In Prototype Challenge, CORE Autosport once again appears to be the class of the field.  Colin Braun turned in the fastest lap in all three sessions.  He was the only PC driver to dip into the 1:55’s, and his lap of 1:55.077 (117.000 mph) during the nighttime session was the fastest of the day, over one second clear of the rest of the class.

Finally, in GT-Daytona, Riley Motorsports‘ Jeroen Bleekemolen set a time of 2:02.901 (109.552 mph) during the morning session, which topped the charts, but only just barely.  Andy Lally in the Daytona-winning Audi R8 GT3 for Magnus Racing was just one-hundredth of a second behind in second.  Jörg Bergmeister in the Park Place Motorsports Porsche was third quickest.  Bleekemolen’s time is faster than the current class qualifying record at Sebring, which he set last year.

In the heat of the day, Mathias Lauda was fastest in the No. 98 Aston Martin Racing Vantage GT3, just ahead of Alex Riberas in the Alex Job Racing/Team Seattle No. 23 Porsche.  Bleekemolen was again fastest at night, but about a half-second off of his pace in the morning.  Spencer Pumpelly was second fastest in the No. 16 Change Racing Lamborghini, while Pierre Kaffer was third in the Flying Lizard Motorsports Audi.

Qualifying will be held today at 3:30 p.m., starting with the GT-Daytona class.  The sessions can be seen live at IMSA.com.