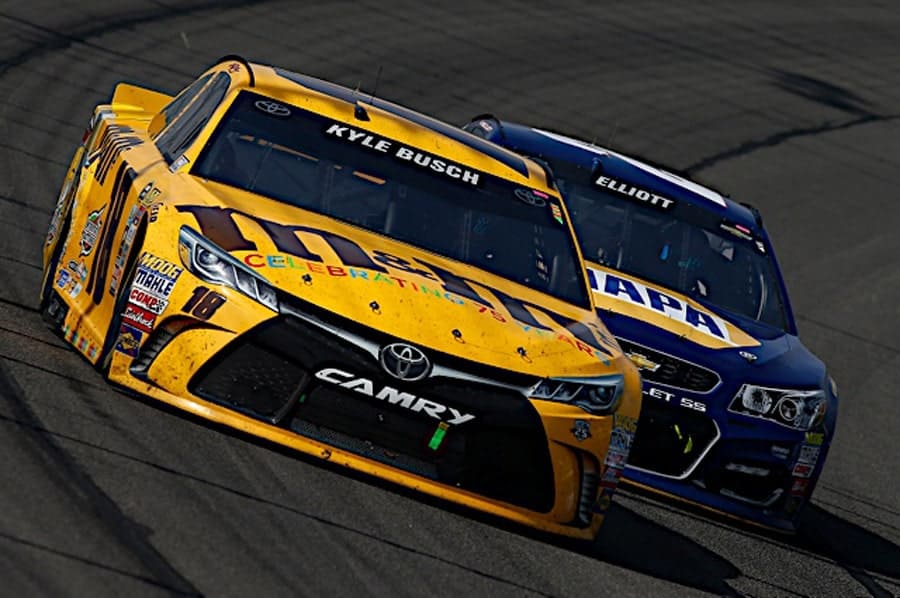 I honestly feel bad for Goodyear at this point.

Sunday’s Auto Club 400 was a brilliant race. With noticeable tire wear, multiple lanes to run in and an old, bumpy racing surface to test drivers, Auto Club Speedway thrilled for the entirety of its 200-lap main event.

Yet, somehow, NASCAR’s sole tire provider found themselves facing scrutiny at the end of the 400 miles.

Courtesy of some blown tires for notables like Kevin Harvick, Greg Biffle and most notably, Kyle Busch for the second-straight day, some fans were left with a foul taste in their mouth by race’s end, one that they had no issue sharing on social media.

NASCAR Executive Vice President Steve O’Donnell was subjected to multiple profane tweets, including one he decided to respond to.

This guy. Way to keep it clean. Only rule for me on Twitter. Have a great night https://t.co/RP0cxVcpBC

To their point, fans critical of Goodyear did have probable cause for their complaints. Using a softer compound this season, Goodyear’s tires have been prone to the occasional blowout. Combined with the oldest racing surface on NASCAR, the Auto Club 400 suffered from multiple blown tires, including one that caused a vicious crash for the snake-bitten Kyle Larson and prompted responses from Verizon IndyCar Series drivers Graham Rahal and Marco Andretti.

It’s unreal to me watching these Goodyear tires blow up constantly in #NASCAR. Frightening really. Unacceptable for modern technology.

Come on Goodyear. This is getting bad. #Larson

While the general state of safety in IndyCar is a commentary for another time, the critique of Goodyear from two of the sport’s most popular drivers added insult to injury on what was expected to be a spectacular day for the tire manufacturer.

It’s unfortunate that all of this criticism rained upon Goodyear on Sunday afternoon, because while their tires were responsible for a couple blowouts throughout the day, they also provided one of the best races in recent memory for the NASCAR Sprint Cup Series.

Whether fans had their eyes on the leaders or the drivers in the middle of the pack, intense racing transpired throughout a long 400 miles in California. Passing was as easy as its been at any track on the circuit for the Cup Series field. Johnson drove from 20th to take the victory. Denny Hamlin and Carl Edwards overcame penalties to compete for the win, and Harvick overcame early tire issues to lead in the late stages.

The necessity for tire conservation – mixed with the successful low-downforce package – led to a spectacular race.

As for the tire issues? Most of them weren’t entirely Goodyear’s fault, either.

As pointed out by ESPN’s Bob Pockrass early in the race, many of the blown tires throughout the day were attributed to contact, punctures or risky tire pressures set by the teams.

Goodyear says Vickers tire issue was from contact with wall and Kahne had a puncture. Said KyBusch tires were fine. #nascar

There will still a fair share of unexplainable blowouts – two for Kyle Busch in particular – but overall, the quality of racing provided by Goodyear’s tires overshadowed the few issues.

Sure, Goodyear still has some work to do. Until unprompted tire blowouts are a thing of the past, there will always been improvements to be made. But the tire manufacturer is still heading in the right direction.

There was a lot of pressure on Goodyear entering this season. Prompted by a tire debacle at Indianapolis in 2008, Goodyear had spent much of the last decade providing NASCAR with hard tires that lacked falloff to avoid blown tires.

At first, the change was well received. However, in recent years fans and drivers begged Goodyear to switch to a softer tire and promote falloff.

This season, Goodyear gave the fans what they wanted.

With softer tires and less downforce on the cars, the Cup Series has exploded to one of the best beginning’s of a season in series history. Finishes have been closer than ever – literally, the average margin of victory is at a record low – and the series has shown parity, with each manufacturer winning early.

Yes, the tire blowouts have been bad, but the racing is also as good as it’s been in years.

Fans and drivers wanted Goodyear to increase the tire wear to allow for better racing, and they delivered.

To those that are upset about the tire issues, I only have this to say: you’d best not be complaining if they go back to harder tires and the quality of racing suffers.

After all, you can’t have your cake and eat it, too.

Wait until Johnson complains about the tires.

How many tires were used. How many had problems. How many drivers didn’t have problems. Why didn’t they? Same tires.

Fine. Then let there be competition. Bring back Hoosiers.

That will never happen. Not only because BZF’s marketing firm has Goodyear as a client. But because the teams don’t want two tire companies competing against each other. Safety is one reason, but also because if you align with the slower tire youre screwed.

If you lived through the Hoosier/Goodyear war, you don’t want them back. F1 has Supersoft tires. NASCAR would have Supersuperdupersoft. Not good for more than three or four laps. But they qualify fast.

Yup. I lived through it. I still think competition makes for a better end product. nascrap can set specs for compound resiliency, camber/caster/toe limits, etc. Heck, everything else about their ‘stock’ car is spec, why can’t the tires be also? Align with the slower tire? So be it…freedom of choice, right?

I doubt Hoosier is willing to get back into nascrap, anyhow. Guessing old grey hairs (like me) blame them for Neil Bonnet and Rodney Orr (which I don’t).

The tire companies want the fastest time for the pole position and the compound gets too soft in order to get them and the tire doesn’t last.

The tire companies would not agree to compound limits.

for those that remember the Hoosier?Goodyear wars it was the teams complaints that brought it to an end. They had rather be equal with an average product than somebody potentially having something better.

I love it, “competition is a safety issue” you would have to dig deep to come up with that statement after watching Larson blow a tire and is very lucky he did not get seriously injured. Political BS we expect from politicians , but not commenting on the tire issue. Is the writer a shill for Goodyear and Nascar? Sure appears that way.

And if the tires were too hard, the drivers would complain all day that they couldn’t pass (see Atlanta Spring race 2008).