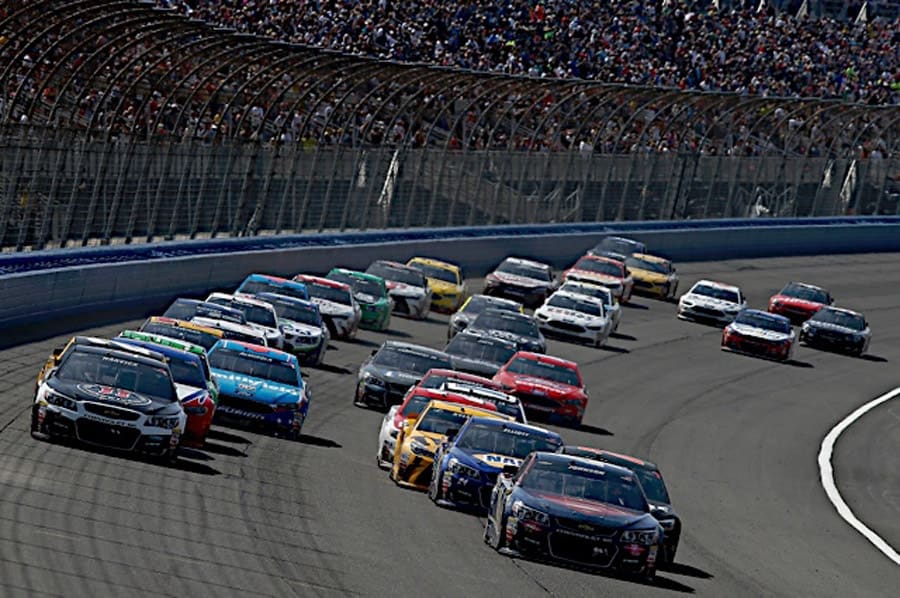 Sprint Cup: Hollywood Ending for Unlikely Teams – It was quite the super finish for a number of NASCAR’s “underdog” teams Sunday at Auto Club Speedway.

Behind Superman of Jimmie Johnson driving to another victory in 2016 there were 31 cars who finished on the lead lap in an afternoon littered with tire failures and side-by-side competition. Of the 31 drivers, eight stood out as truly impressive runs.

The first was handed to Premium Motorsports and Cole Whitt. The team suffered the agony of missing the Daytona 500 in February and has brought their No. 98 entry to the track each week since. Sunday saw Whitt stay on the lead lap and finish 26th, tying the team’s best result since July 2014 and earning their second lead-lap finish in its history.

Clint Bowyer has been a tough find so far in 2016 as he continues to adapt to the changing grounds of HScott Motorsports. Fontana, however, saw Bowyer bounce back from a flat tire to score an 18th-place finish, the two-car team’s best result of the year.

Brian Scott tied his career-best Sprint Cup effort in 12th while AJ Allmendinger came home with his first top 10 of 2016 in eighth.

In terms of a boost for an organization, Roush Fenway Racing will be high on momentum before this Easter break for at least one of its three teams following a fifth-place effort by Ricky Stenhouse, Jr. He made contact with rookie Chase Elliott, who ran a phenomenal race in the top 5 almost all day before coming home sixth. – Zach Catanzareti

XFINITY: Let ’em Race – My guess is that Kyle Busch was not the only person who was displeased by the ending of the XFINITY Series race at Auto Club Speedway. Busch blew a tire on the last lap while leading and nearly hung on to win the race, ultimately finishing second to Austin Dillon. The reigning Sprint Cup  Series champion was furious on the team radio about NASCAR not throwing a caution for debris on the final lap of the 300-mile race.

In defense of Busch, debris clearly flew off his car as he drove into Turn 1. It is hard to tell, however, whether that debris was metal or chunks of rubber. More importantly, a caution on the white flag lap would have ended the race. Perhaps Busch would have won if NASCAR had acted quickly, but once most people realized what was going on, Daniel Suarez had taken the lead anyway. Regardless, the race would have been decided by officials in the control tower.

Instead, NASCAR determined that the track was safe enough to let the race play out. That decision was the right one, and one that worked to the benefit of the fans. It is true that NASCAR has thrown cautions for lesser debris in the past. Yet if the officials say that there is not a dangerous situation on the track, there is no reason to change the outcome of the race. Besides, can you imagine the uproar if NASCAR did throw the caution and ended the race? The fans got treated to a fantastic finish, one that would not have happened if NASCAR had pulled the trigger and dropped the yellow flag. – Bryan Gable

Formula 1: Horrific Crash Adds to Wild Race at the Australian Grand Prix – The Formula 1 season began this past Sunday in quite a wild fashion.  The grand prix, held in Melbourne, Australia, featured the Ferrari duo of Sebastian Vettel and Kimi Raikkonen racing past their Mercedes foes at the surprising start.

But while the race out front was spectacular and filled with differing strategies, Fernando Alonso and Esteban Gutierrez are the talk of the race.

On Lap 18, as the Alonso chased Gutierrez into turn 3, the two collided with Alonso catching the left rear of Gutierrez’s Haas F1 car.  The incident propelled Alonso first into the the left wall, sent him airborne, then had him roll into the outside barrier.

The scary incident left little of Alonso’s McLaren-Honda, but somehow he emerged from the wreck and limped away.

Gutierrez and Alonso conferred with one another and then both left the track.

In interviews afterward, Alonso said that he thought of his ‘mum’ and that the safety of the cars is something that should be applauded stating that “we are both happy and talking here.”  The stewards took no action and deemed the collision to be a racing incident.

The accident caused the race to be red-flagged, one that Nico Rosberg eventually won.

NHRA: First-Time Winner Part Two – Last race out, the Top Fuel final came down to two drivers running for their first win in the class. One of those drivers, the one who came out on the short end of that win, was Brittany Force. Just one race later she found herself on the other side of the equation, facing off in the final at the Amalie Motor Oil NHRA Gatornationals against Terry McMillen, making his first final round appearance ever in his sponsor’s race, and she came up as the winner this time around.

Force’s 3.772 seconds, 318.77 mph was good enough to beat McMillen’s engine-grenading 3.981 seconds, 266.90 mph. She also defeated Morgan Lucas, Tripp Tatum, and Dave Connolly en route to the finals. Force has knocked on this door for quite awhile, scoring seven runner up finishes before finally sealing the deal.

“It feels good to finally bring home the win,” said Force. “Our car was on fire all weekend. It went down there and had great runs. This is a very proud moment for me and the John Force Racing team, the Monster Energy team. It took everyone to get us here.”

In what was a good day all around for John Force Racing, Robert Hight took home the Wally in the Funny Car class, making a 4.429 second, 280.95 mph tire spinning pass to defeat Ron Capps, who also struggled with traction issues. Hight beat Terry Haddock, Matt Hagan, and Chad Head in the earlier rounds to face off against Capps.

More of the same in Pro Stock as the Summit teams continues to dominate and we see our first repeat winner of the year in Greg Anderson. Anderson beat teammate Jason Line on a holeshot, using a .009 reaction time to parlay his slower 6.598 seconds, 210.01 mph into a win over Line’s 6.581 seconds, 210.57 mph. Anderson got by V. Gaines, Jeg Coughlin, and Allen Johnson on his way to the finals.

Sports Cars: Pipo Derani Continues to Dazzle; Continental Makes Huge Gains in Rain Tire Technology – On Saturday night, Tequila Patron ESM took overall victory in the Mobil 1 12 Hours of Sebring, and it came thanks to the might of the team’s 22-year-old phenom Pipo Derani.  The race restarted with a little more than 12 minutes to go after a late crash for the Fifty-Plus Racing Daytona Prototype.  Derani restarted in fourth and immediately passed Nicolas Lapierre in the DragonSpeed No. 81 ORECA 05-Nissan for third (Note: Finishing fourth on debut was an incredible run for the DragonSpeed team).
The two Action Express Racing Chevrolet Corvette DP’s were still in front of Derani and trying their hardest to preserve a 1-2.  Two laps later, Derani made an aggressive dive to the inside of Filipe Albuquerque to take second in the Hairpin.  One lap later, he took the lead from Dane Cameron in the same place, despite Cameron apparently taking the line away from the young Brazilian.  From there, Derani was home free for his second win in a row.  I’m sure IMSA is really wishing that Tequila Patron ESM (and by extension, Derani) was full-time in the WeatherTech SportsCar Championship, but this will be the last time fans see Derani’s on-track skills until July.  Here’s the last 12 minutes, with excitable commentary from IMSA Radio.

In addition, Sebring saw the debut of a new generation rain tire from Continental Tire.  Normally, that wouldn’t necessarily be much to write home about, but the previous two race weekends showcased Continental Tire’s weakness in the rain.  Road Atlanta saw Porsche North America’s No. 911 GT-Le Mans entry win overall in a race shortened due to heavy rain and darkness.  The race was legitimately won on merit as Nick Tandy passed the No. 31 Chevrolet Corvette DP of Eric Curran on-track for the win about nine minutes before the caution that ultimately ended the race came out.  Daytona saw not one prototype qualify within four seconds of Nick Tandy’s Porsche 911 RSR on Michelin tires.  In fact, Johnny Mowlem’s Prototype Challenge-class entry (without traction control) outqualified the entire Prototype class.
The new rain tires from Continental saw the Prototypes able to maintain their natural advantage over the GT-Le Mans cars in the wet for the first time since the ALMS/Grand-Am merger.  Also, they seemed to be quite durable as well. Continental Tire can definitely hold their heads up high after a tough Sebring weekend. – Phil Allaway