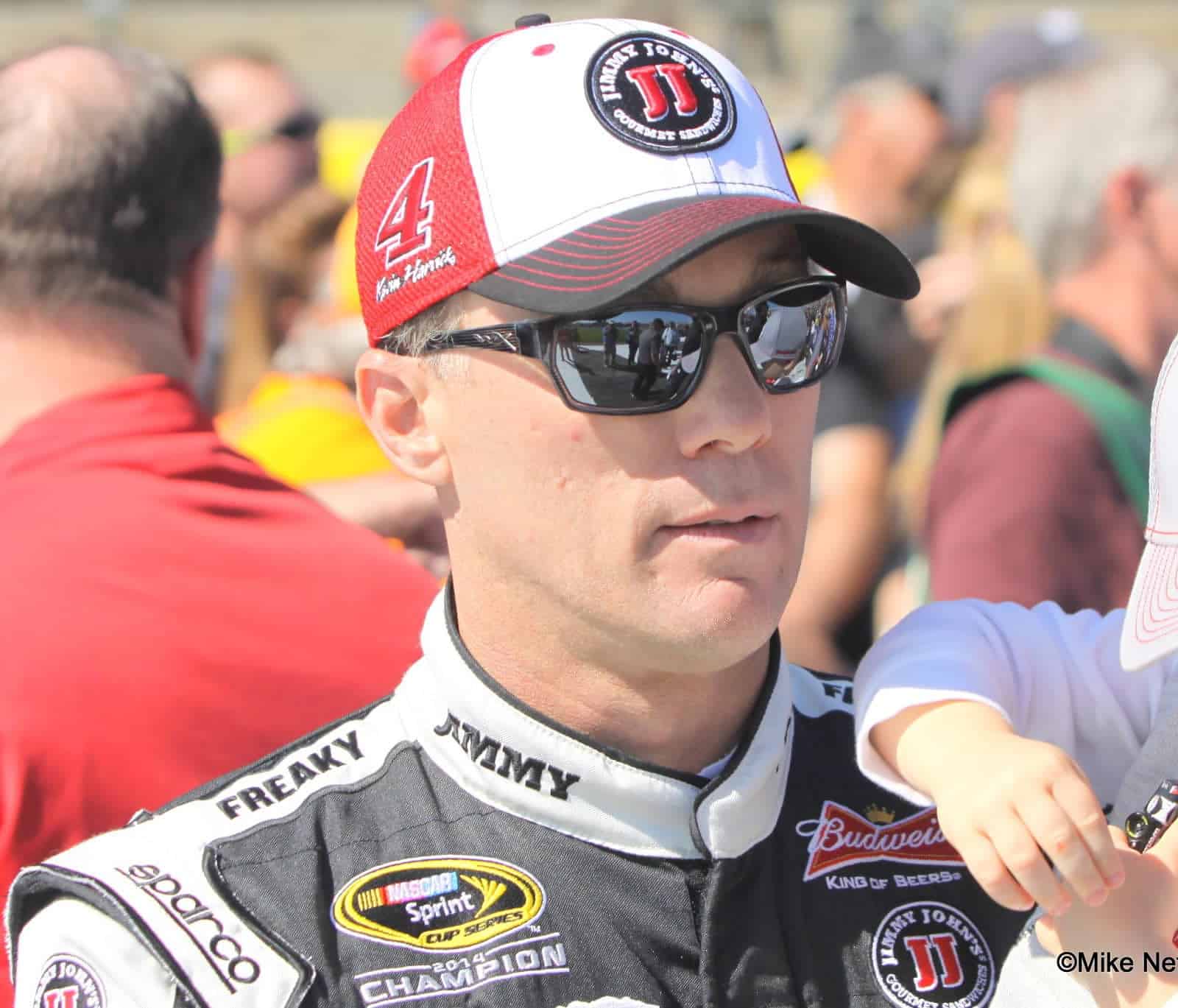 For Kevin Harvick, the phrase “so close, yet so far” has got to be getting old. Like, about ready to smack a dude in the face old the second someone mentions second place. The driver of the No. 4 car dominated Sunday’s proceedings at Fontana, leading 142 of 205 laps and appeared poised to run away with the win down the stretch. But a late set of tire failures, culminating with Kyle Busch’s hard hit into the turn 4 wall, left Harvick vulnerable to a final round of yellow-flag pit stops. By the time he pushed through that, his Jimmy John’s car fell to third, promptly failed to get going on the final restart and then, just like that, another bid for the win by this seemingly dominant Stewart-Haas Racing outfit was toast.

“We weren’t very good on restarts for four or five laps unless we were all by ourselves,” he said afterwards. “That was worst case scenario for us.”

“They just had us beat for a couple of laps.”

“They” would be the driver who stole the trophy from under Harvick’s nose: Jimmie Johnson, also a trick that’s getting old. It was Harvick who once famously said the six-time champ had a “golden horseshoe” stuck up his ass; whatever the reasoning, however the luck, the bottom line is the driver of the No. 48 car is running away with far more golden trophies. Since the start of the 2014 season, Harvick’s first with SHR, he is 2-for-2 on Chase Final Four appearances, has earned one title and should be dominating his rival on paper. Yet it’s Johnson, not Harvick, who has earned more trips to Victory Lane during that stretch by a total of eleven to nine. During a modern Chase format where both inclusion and success are based on wins, it’s a pretty damning statement, especially considering Harvick has outrun Johnson to the tune of 4,844 laps led the last three years to just 2,039 for Johnson.

It seems the driver once nicknamed “The Closer” has learned a pretty harsh lesson, through luck and late-race mishaps: they don’t pay for how you dominate the event. They pay for whether you’re in front when the checkered flag flies.

“I didn’t expect to get inside of [Harvick] and really have a shot at racing him for the win,” Johnson said of that final two laps. “I jumped on the gas, drove on up next to the 4, and I thought, damn, we have a shot to win this. There were two moments between the green flag and halfway down the back where I went from optimistic to jumping up and down inside the car and really having fun with my situation.”

For Johnson, a six-time title winner, the pressure is off; he’s established a Hall of Fame legacy. For Harvick, his tenure with SHR has meant more because it was a clear step up into a championship-contending program he never seemed to fully have at his disposal with previous employer Richard Childress Racing. The numbers for Harvick last year could have been record-setting: there were 13 runner-up finishes to go along with his three victories. Turn 11 of those into wins, including the season-ending race at Homestead and suddenly, you have a year and a pending dynasty (back-to-back titles) that could rival what Johnson has been able to accomplish in the modern era.

But those runner-up finishes weren’t victories. Instead, these were races Harvick and Co. found themselves snakebit. And when they are, more often than not, it’s the No. 48 team that inches out ahead of them. In Johnson’s last seven wins since the start of the 2015 season, Harvick has wound up second in five of them. Getting that post-race interview walking away from victory lane, all while seeing your “teammate” and fellow California native take another one in your hometown race? There’s only so much humble pie you can eat. No wonder why you’re beginning to see the frown through all those sponsor-friendly comments.

It’s a weird position for Harvick to be in; this pattern is getting old and the driver himself? He’s getting old too, here, on the verge of contract renewal at age 40 and with a team that’s switching to Ford, a manufacturer Harvick would be switching to after a decade and a half of loyalty to Chevrolet. Now, yes, I understand, all the stats on paper say he’d be a fool to even look anywhere else. The team has gone out and dominated a track like Phoenix, making it their personal playground to the tune of four victories in the last three seasons alone. But wait a second; that’s four of his nine NASCAR victories on tour during that stretch.  Faced with opportunities to claim similar dominance at Las Vegas, Charlotte, even Johnson’s best career track of Dover, this team keeps coming up with second place. It’s a weird, nagging feeling that they’re underachieving despite putting together one of the most dominant programs we’ve seen this century. At least one that hasn’t been built at Hendrick Motorsports, Johnson’s team that currently props up SHR with engine and chassis support.

It all leads to this “what if” scenario when the stats say Harvick should be running circles around everywhere else. Somehow, some way Johnson is still stealing the limelight, earning his 77th career victory Sunday to push him past Dale Earnhardt on the all-time list. Heck, even the man Harvick replaced way back in 2001 is now sitting there and looking up at Johnson.

For a man whose goal was to challenge that hierarchy, armed with the team, the speed and the chemistry to do it these nagging second-place finishes are beginning to feel like an opportunity lost.

Oh lord, Harvick is fine..and now the death knell sounds. Good grief. He never called himself “the closer” the media did, way, way, way too much. Now something is wrong with HIM? Don’t think so.

Well we gotta have a story for 2 weeks ;) Next will be what’s wrong with Matt Kenseth…and – we’ll get to watch him wrecking logano for the next 2 weeks, and it’ll be all the rage on all the NASCAR news shows….

Waiting for the question in the Friday Faceoff: “Can Kevin Harvick rebound after a dismal California?”

What isn’t mentioned here is that most of the time when Harvick is stinking up the show, NASCAR throws a debris caution or they throw a caution because a car barely scraped the wall and is already headed to pit road with 2 laps to go like they did Sunday. This type of thing has happened repeatedly since he has been in the 4 car. You give these other teams enough shots at the dominant car and eventually they’re going to get by. The 48 team is probably the best team we’ve ever seen and they don’t need any help. I’m not claiming bias against the 4 team. In today’s NASCAR this happens to the dominant car regardless who it is because cautions are used to manufacture drama. We’re seeing it most with Harvick because he’s out front so much. Busch ran a whole lap hammer down spewing debris all over the track with other cars at speed on saturday with no caution because it was exciting. On Sunday, the same man blew a tire and scraped the wall, gained control of the car and headed through an opening toward pit road when a caution was thrown for what looked like a small piece of rubber with 2 laps left because the 4 was running away with it and a restart is more dramatic. It’s total bull and really upsetting when it happens to your driver.

can’t agree with you more Dan. I’ve been thinking about this one – and many of the others that he lost this way, and it’s happened to a number of drivers. There were 4 other cars in the last 10 laps that had tire issues, some of which likely left debris on the track – no caution – i hate that it happened, i’m sick of him having a great day and not capitalizing on it. Just flat out sucks. However, i think this is the one area which RC isn’t able to figure out – how to get the car to take off better at the end of a race for a short sprint, when he does that – then this won’t bother us KH fans so much.

First off Harvick restarted 2nd, on the front row in front of Jimmie not 3rd, that was Jimmie. “IF” Harvick had won the title last year and made it back to back championships it would have not been a dynasty equaling Jimmies 5 straight titles. as far as Harvick being called the ” closer” lol, it is Jimmie who is the real closer, always has been since he started racing. Heck Harvick doesn’t even have as many wins as Kyle Busch. In the 14 races Jimmie and Kevin have finished first and second, Jimmie has won 12 of them, including the last NINE straight. Harvick isn’t the closer by no means,, Jimmie is. Sad how Harvick led the race for 3/4 of it and restarted ahead of Jimmie on the last restart, but Harvick blamed the car for getting beat and not himself for getting outdriven once again by Jimmie. Now harvick has to read about Superman for two weeks before getting back on the track. He wasn’t too HAPPY was he. lol