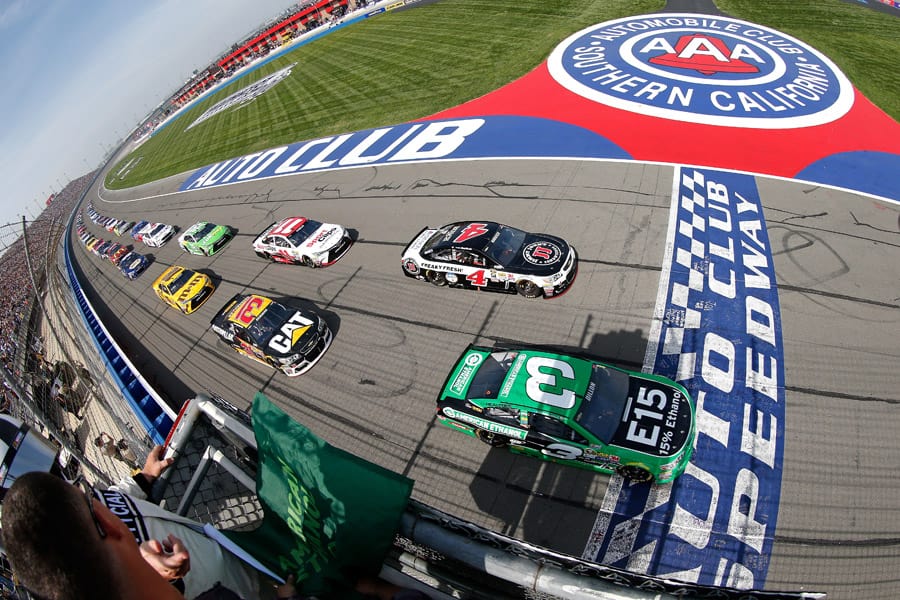 NASCAR’s overnight TV ratings were down for the fifth consecutive week on Sunday for the Auto Club 400.

According to Sports Media Watch, the Auto Club Speedway event scored a 3.5 rating.

This is down 13 percent from the 4.0 rating the previous two years scored. It marks the lowest rating for the race since the rain-shortened event in 2012, which drew a 3.4 rating.

The event faced competition from round 2 games of the NCAA Tournament. However, the tournament also saw a drop in ratings as its numbers were down by double digits.

When NASCAR returns at Martinsville Speedway on April 3 after the first off-week of the year, FOX Sports 1 will have its first of seven Sprint Cup Series broadcasts this season. This will mark the second year the channel has carried regular season races.

Why does no-one realize that the orig. base of fans may not have access to anything but antenna? Plus when speed channel ceased we could no longer see hub-v.lane-practice-qual. etc.and hence lost track-and interest in-what we could watch. I’m not at all surprised at the loss of viewers and I’ve been a fan for 50+ yr’s. when I listened on radio-which isn’t on in my area either anymore.Pitiful and frustrating.

Good points. In my part of the world the most basic of cable services the rates literally change monthly, a one month notification with some lame this and that excuse. And this is acceptable. We have a monopoly unless you get dish service you are at the mercy of one company. And it is deplorable. They get a stranglehold on the state for years and years. And the PUC says we will watch this and that. They just watch the rates go up without justification. Oh yeah “we continue to strive to make our services better”. Ah, not true. Comically bad gouging.

To join the old folks club I started out listening to the races back in ’63 on a Philco radio. Had to disconnect the TV so could attach the antenna leads to the radio to get a signal.

That said remember folks for Nascar and the networks, they are in it to make money. If we cant afford the rates its not their problem. Just wait till they figure out how to make money off the internet.

The death spiral Nascar is in was created by none other but Nascar themselves. I grew up around racing, family fielded cars from the 50′ til about 5 years ago around the northeast. NASCAR has built this mold of disaster for many years. The rules have changed so much over the last several, that now only the elite teams exist. There truly no independents left, as even they are aligned in some manner with Hendrick, Roush etc. Teams used to race on the edge trying to win by being ahead of the game. Now we have the lucky dog (hell you can get that more tha once) the wave around! Wasn’t the idea to outrun the competition and just plain beat them. NASCAR has become nothing more than weekly melodrama that relies on the relentless drone of the announcers to bore the viewing audience to sleep. Now let’s add the chase and brackets into the picture (this is why I am done with NASCAR) Win and in, there’s a realistic points battle brewing am I right? Nope, completely wrong. You see what transpired last season made me turn off NASCAR for good. Now, I am grateful Kyle was in a safe car and did not have career ending injurys. But in what context or rulebook can a driver miss 11 races and still win a championship. I’ll tell you, it’s NASCAR, a 36 race made for TV miniseries that has become uninteresting. Sorry for the rant but it’ back to local short track racing for me. Local racers putting on a show!!!