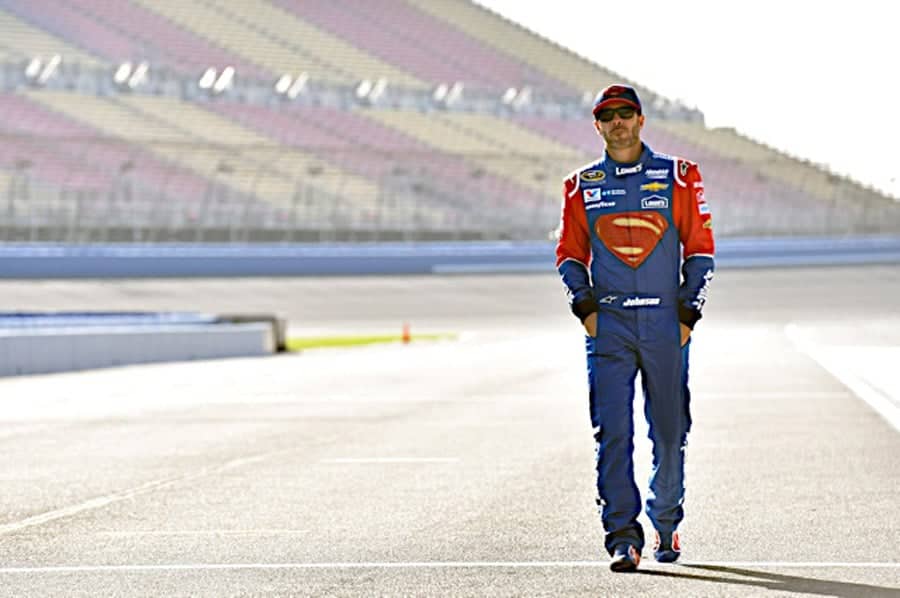 There’s that old Jim Croce song, covered by many several times over the years, where it talks about not tugging on superman’s cape and where you don’t mess around with Jim. A late restart at California Sunday afternoon allowed for both of those things to happen, in a sense. It pulled the cape of the Superman-themed car that was looking at a top-10 finish, but had no chance to win, and it proved once again that you don’t mess around with a driver named Jimmie when he’s given an unexpected shot at victory.

It seems good things just happen to Jimmie Johnson when he returns to his homeland of California. So, when the late caution waved Sunday afternoon, that flag looked more like gold than yellow for Johnson. Johnson won the restart and the race at California for the sixth time and the 77th time he’s visited Victory Lane overall. And now, just five races into the Sprint Cup season, Johnson is the first two-time winner on the season. And while the start of the Chase is a long way away in September, it’s clear that Johnson has already made himself one of the favorites to be in the championship four at Miami again.

If it wasn’t for bad luck, it seems Kyle Larson wouldn’t have any luck at all. Larson appeared to cut a tire, one of several drivers with tire issues on the day, and he took a hard hit into the outside wall and then richotched into the inside wall. It left Larson as the first car out of the race and with a 39th place finish. Even though it’s still early, it seems Larson may already have to win his first career Sprint Cup race in order to make the Chase. He is already 24th in the points standings. The one thing you have to wonder about in Larson’s situation is the crew chief, Chad Johnston. You see, Larson and Tony Stewart, who Johnston was crew chief for last year, each made their mark driving cars on the dirt, and so you would think they would prefer similar set ups on their cars. But with Johnston’s lack of success with Stewart last year, you have to wonder if there could be similar issues with Larson this year. Yes, it’s early, but a few more difficult days like this for Larson and it will be getting late really fast.

It’s true that any driver who dominates a race, but then doesn’t win it has to be a bit frustrated. Even at that, Kevin Harvick now has a win and a second in the last two races. Harvick led 142 of the 205 laps Sunday, but his car wasn’t the greatest on restarts for much of the day, and that’s how he ended up second in this one. Harvick is first in points, too. But if we have learned anything about this low downforce package and how it can influence tire wear, it seems there may be a lot of late restarts this season. So being good on restarts may well be the difference between getting a win or settling for a top five finish on some days. My guess is that Harvick and crew chief Rodney Childers will get the end-game figured out.

So, even when Danica Patrick is having a good day, it still turns out bad. Patrick was on the lead lap for once, when she collided with Kasey Kahne, who at the time was a lap down. Kahne appeared to give Patrick no room at all as she was on the low side in the corner and Kahne on the high side, causing Kahne to clip Patrick on the right side and send her spinning away and out of the race. If this had been a role reversal, there would have been a universal criticism of Patrick, who has throughout her career gone out of the way to let lead lap cars go by without incident when she has been in that situation. Also, this is not the first time where a counterpart has appeared to wreck Patrick for no apparent good reason. So, it says here that it’s time for Danica to put her foot down. So, say at Martinsville (these kind of things seem to happen at Martinsville), if Patrick is a couple of laps down, and Kahne is fighting for position, and she just happens to be in position to tap his back bumper and does send Kahne into the wall, maybe that will make others think twice and know it’s not all right to do the same to her. It’s really about the only recourse she has left.

Chase Elliott and Ryan Blaney have been the two top rookies so far, but another rookie put in a good run on Sunday, as Brian Scott ended up 12th in the No. 44. Scott doesn’t have a top 10 yet, but Sunday was a big step in the right direction and gives the team something to build on. Whether he will be able to challenge Elliott and Blaney on a consistent basis remains to be seen, but at least he and his team know it’s possible.

One driver I’m a bit surprised at, having just one top 10 in these first five races, is Matt Kenseth. He had some bad luck in the first couple of races of the season, but Sunday Kenseth wasn’t much of a factor while finishing 19th. The one thing about Kenseth is that he generally knows how to keep a less than ideal day turn into a complete disaster day. That’s allowed the No. 20 team to be 15th in points so far and you know they are capable of winning anywhere anytime. But before the season started, I would have been surprised if someone told me the No. 20 team would have just one top five in the first five races.

Martinsville prediction:
So, we’ve got a week off until the next race, and things sure can be interesting at Martinsville. So, for good measure I’m going with Joey Logano to gain the win he could’ve had there last fall. The super-duper deep sleeper pick for Martinsville is Aric Almirola, who has an average finish of 14.25 in the last four races there.

Nah, don’t think Logano will get it…remember his fellow “professionals” complain, vow revenge because he breathes near them. Lord knows what moron this race will pick up with the Kenseth mantel of stupidity and run him into the wall “for sport” laps down to get his name in the media. Maybe ColePear will run out on the track in front Logano’s car…like a classic insurance scam, the world will see it, know what they saw..but because it’s Logano, the narrative will be that Logano crashed into the crew chiefs stand. LOL.

Kyle’s hot and probably out a few dollars that his wife has already spent.