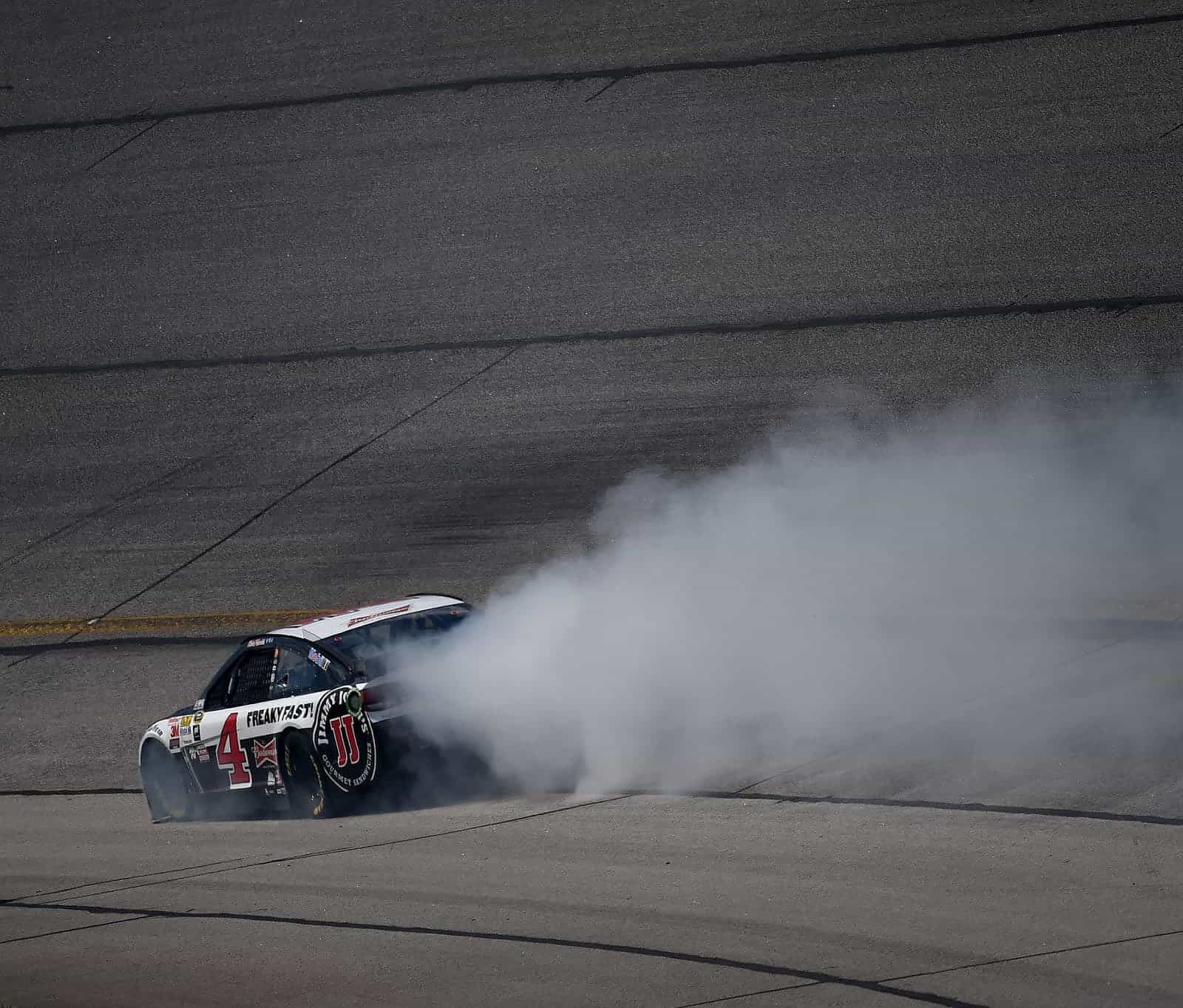 Did You Notice? … That in the first five races more cars are avoiding mechanical failure than ever before? One of the storylines in the midst of NASCAR’s new rules, a package that has brought much needed passing and unpredictability back into racing has been the ability of cars to go the distance regardless of circumstances. Here’s a quick look at the total of Sprint Cup DNFs through five races and how it compares to previous years…

Certainly, the decline becomes far more pronounced as the start-and-park teams have been cleaned out the past few seasons, both due to a push among the backmarker teams to actually compete and NASCAR’s Charter system reducing the field this season. Shorter races, inevitably putting less stress on parts and pieces also have played a role.

However, the end result remains the same: fans rarely have to worry about their driver failing to finish as long as they don’t wreck. Greg Biffle’s engine problem at Fontana was the first one this year suffered by a major Ford, Chevrolet, or Toyota program. The other three mechanical DNFs? Racked up by a non-Charter team, Jay Robinson’s Premium Motorsports and by a BK Racing car rolled out on a one-race deal. With multi-car teams, a flood of employees at the shop whose job it is to test, test, test and the flat-out reliability of cars today it’s hard to see that trend easing up anytime soon. That reliability extends onto the street as well as the track; I know plenty of people whose cars have over 150,000 miles on them and are running fine. Compare that to the turn of the century when my first car, a 1990 Ford Taurus had 200,000 miles on it and was considered a freak of nature.

I do think, though that despite the new rules NASCAR continues to put itself in a box in the name of parity. When crew chiefs have such a strict limit on what they can and can’t do, you’re not going to see aggressive mechanical setups that put a strain on parts and ultimately blow an engine going 200 down the backstretch. Maybe that’s just part of the evolution of the sport; maybe it’s a good thing we don’t see half the cars sitting in the garage at the end of races. The difficulty of the chassis to control behind the wheel this year, leading to actual spins as a result of driver mistakes (a result that was near impossible in recent years) is a big step in the right direction.

Still… there’s worry over a lack of, well, worrying. The smoke of an engine blown, the need to actually conserve your equipment the right way is a small part of the unpredictability factor that’s missing in a comeback year for NASCAR competition.

Did You Notice? … Brian France’s push concerning new manufacturers involved in the sport? The answer he gave SIRIUS XM last week was rather vague; in fact, it smelled more like fishing for hope than actual substance. “There is some interest from a couple of different manufacturers,” he said. “We would be open to that in the right conditions. And this is obviously the biggest opportunity in auto racing in North America.”

With those basic comments out of the way it would be nice to see some actual traction to those words. NASCAR’s last new manufacturer was Toyota, of course who debuted on the Cup level in ’07; no one stepped up to replace Dodge when they left the playing field after the 2012 season. Among the top car manufacturers in the world who haven’t given NASCAR so much as a second look this century: Volkswagen, BMW, Honda, Nissan, and Hyundai.

Here’s where I think the sport could benefit by going out on a limb. With a little bit of wiggle room in the Cup Series field these days — we just cut down from 43 to 40 cars — why not pursue a starter team from a manufacturer like Tesla? If the world is going more forward-thinking, pursuing electric cars and hybrids like the Toyota Prius why shouldn’t the sport jump into those waters? NASCAR can pledge to be more enviro-friendly and they’ve done a great job to reduce emissions and repair their image in that arena.

But a way to look “cool?” Get a manufacturer that’s changing the way the car game is played across the country. It wouldn’t be the worst PR move for Tesla, either whose stock has plunged over 50 points since July of last year. While NASCAR’s declines are well documented, it still is the largest form of motorsports in North America and who is on board with that manufacturer most of all? The 18-to-34 crowd the sport covets.

It’s a point linked to the most important part of NASCAR’s future: what to do next. The charter system has supposedly stabilized the ownership ranks; new rules have increased the quality of competition. Now, how do you market yourself and get more people back involved? How do you change a perception the sport is still on the decline? These are questions plenty are thinking about during an off week where Fontana offered fantastic competition… yet a 13 percent decline in the Nielsens year-to-year.

– Mike Hillman suing Joe Falk over a Charter, a lawsuit whose details were well documented by Dustin Long and NBC Sports yesterday brings to light what insiders have known for years: pay-to-play rides. If you think $75,000 for Richard Childress Racing renting out a Daytona 500 ride is a high price, one has to wonder how much Stewart-Haas Racing is getting to put Ty Dillon in the seat for a handful of weeks when Tony Stewart is sitting on the sidelines. It’s one area where NASCAR is weirdly different from other sports, in particular over the last decade; when your star player gets hurt, you actually have a chance to make more money. Bizarre.

– Brian Vickers running in the Indy 500 would be huge for both IndyCar and NASCAR. Why do we not have more drivers willing to do the crossover? Can someone find a place  for Kurt Busch while we’re at it?

– No wonder why Kasey Kahne is desperate. He and Danica Patrick have the exact same number of top-20 finishes. If Patrick were allowed to finish Sunday (rather than be wrecked by Kahne’s front bumper) she would have three as opposed to Kahne’s two. When will Rick Hendrick bring back Kenny Francis or do a complete overhaul of the No. 5 car?

If more cars are finishing why do they still need to run 40 cars. Another reason for Quality over Quantity! Right, Brian? Seems like less money for payout in winnings.

When you don’t let the teams change gears or make other mechanical adjustments then you’ve basically turned the series into a spec series and the result will be a lower amount of DNF’s. Additionally there are only a handful of engine builders now which in turn also adds to a decrease in mechanical failures. If you recall the IROC series never had many DNF’s. Of course it also didn’t have a lot of fans…I’m sure that its just a coincidence and there isn’t any correlation between the two.

That’s what I was thinking even before reading your post. NASCAR has become more and more like IROC.

Taking the usual Danica drama out of the equation. You could have knocked me over with a feather when HMS resigned Kahne.

Maybe there was no one available to replace him. Now it might be they were waiting for Harvick.

He signed a 3 year contract (I believe) wafting in the wings till that expired. I could be wrong, just going on memory right now.

Another rumour is Kimi from F1 going to Stewart’s team.

If he does it will be because of the deal between Haas and Ferrari. His career is basically over in F1, certainly at the top level like Ferrari. This would allow them to unload his contract and bring in a younger, hungrier driver before Kimi’s contract expires. At the same time Haas gets the PR benefit of having an ex F1 hero on his Nascar team. Makes a little sense to me, partiicularly if Harvick is leaving.