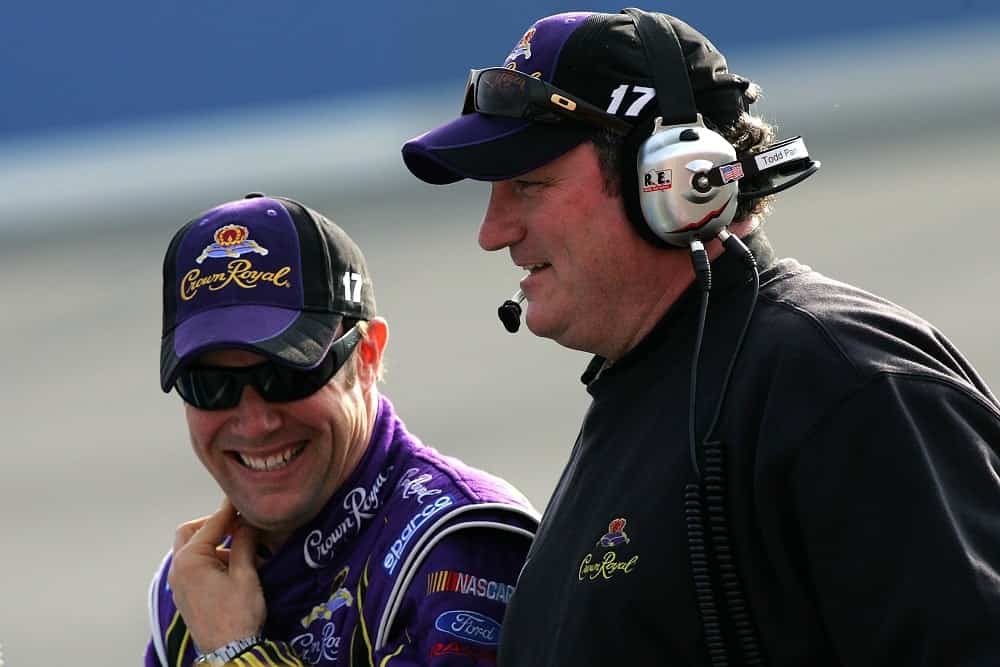 The pit box is where this man belongs.

Todd Parrott’s career as a crew chief in NASCAR’s premier series started in 1995,  paired with Ernie Irvan. For the overwhelming majority of his career, the veteran leader worked for Robert Yates Racing, guiding now NBC commentator Dale Jarrett to the 1999 Sprint Cup championship.

Parrott stayed at RPM until 2013, winning a pair of races with Marcos Ambrose. However, he was suspended late that season for failing a drug test, which ultimately could have ruined his career. But Tommy Baldwin Racing gave him a chance in 2014 to lead the No. 36 car with Reed Sorenson.

Fast forward to 2015 and Parrott was no longer a permanent face on the pit box. Instead, he became Richard Childress Racing’s Director of Competition in the XFINITY Series. He did well enough to crew chief 12 races total in Sprint Cup competition for Brian Scott and Ryan Newman (six each).

We caught up with Parrott at the Charlotte Motor Speedway Media Tour to discuss his new role as Ty Dillon’s Cup Series crew chief this year with the No. 95 team as part of an alliance with Circle Sport-Leavine Family Racing, what it’s like to work with Chevrolet after spending years with Ford, his past and more.

Joseph Wolkin, Frontstretch.com: You have a new role this year. What are you looking forward to about working with Ty Dillon?

Todd Parrott: I got to work with him last year in the Daytona 500 and at Homestead and a few other times. I’m looking forward to it. We built some good racecars over the winter. Daytona is one of my favorite places. I’ve had a little bit of success there in the past. I feel like I pencil that one off as a pretty high-ranking race personally. We’re going to go down there with a new race team and be competitive and have a chance to win a Daytona 500.

Wolkin: How different is the Daytona 500 for you after all these years?

Wolkin: After working with so many different aero packages, what do you expect with this latest one?

Parrott: I think that the racing is going to be good. I think to come out of the box, you will have some teams that will really shine. The Penske cars were really up on it at Kentucky and Darlington. The cream always rises to the top in this sport. They have success and they have the resources to do the things that they do, and they will be successful once we go to Atlanta.

Wolkin: Besides the new rules package, there is the addition of the digital dash and other technical innovations that NASCAR is making. How do you feel that gets the younger generation more involved?

Parrott: Oh, I think it is going to be great. As far as working with the digital dash, I was fortunate enough to work with it on the No. 33 car with Brian Scott. We came out with it at Chicago or Kansas. We got three or four races with it in the 2015 season. It has about 47 different channels and different LED screens and different things that you can do with it to show the driver information. That technology will get transferred over to the viewing audience. It is going to be a lot more similar to what people now have in their street cars.

Wolkin: What are your expectations for Ty at the non-restrictor plate tracks?

Parrott: I think he’s going to be good. There isn’t really a schedule set for the races he’s running yet, but I think the places he will run, I think him running in the XFINITY Series with the Cup races will be nothing but help.

Wolkin: Do you feel like it is bittersweet at all to work for Chevrolet after being heavily involved with Ford for most of your career?

Parrott: It’s definitely different and it’s a different group of people. They all have the same mindsets. The philosophy at the end of the day is: Win on Sunday and sell on Monday. I enjoyed all of my years working with Ford. Edsel B. Ford is a very good friend of mine and I know him very well through my Ford relationship with the Yates’ and everything with Dale Jarrett and even with Rusty [Wallace] at Penske.

Seeing that No. 2 car over there [set outside Glory Road at the NASCAR Hall of Fame to honor the 50th anniversary of Team Penske’s existence] this morning was kind of cool. When we switched from Pontiac to Ford in 1994, I had a hand at taking that particular car and having that body put on that car. Seeing it this morning brought back a lot of memories.

Wolkin: What memories stick out to you after all of your years in racing?

Parrott: I would say probably nothing is going to top the day we won the Daytona 500 [in 1996], and then obviously winning the championship at Atlanta. The first Brickyard 400 win for us in 1996 was big. I would say the Daytona 500, and there is nothing that is ever going to replace it because it was my first race as a crew chief and I won the Daytona 500. Nothing will ever take place of that. Winning the second one [in 2000] was even more special.

Wolkin: With so much success at Indianapolis, what do you think about each time you walk into the facility?

Parrott: I think of the wins and the losses. I think of 1997, when we were leading the race by a half-lap and I made a gutsy call and lead for the halfway money, and we ran out of gas just past the start-finish line. We had to coast all the way back to the other end of the track. We had to push the car all the way down pit road and only one or two of them were able to help change the tires. We were four laps down and made three of them up, and we finished the race only one lap down. Sitting on the pole there with Elliott in 2005 was obviously pretty special, too.

Wolkin: After being through so much over the past few years, what does it feel like to have job security with RCR?

Parrott: I have been through a lot. I have experience with the good, the bad and basically everything. To have a job at RCR – Mike Dillon and Richard Childress gave me the opportunity last year to come back as the competition for the XFINITY Series team – and then to move me over as the crew chief of the No. 33 car, it’s good to be back this year. I crew chiefed seven races for Luke [Lambert] when he was on suspension. The ‘bullpen guy’ is basically what I am. We’ll have as good of a chance as anybody to win a race.

Hopefully Todd will do good. Been around for along time.